The Legislature is dissecting an $884 million package for the Ford electric truck plant to be constructed at the Memphis Regional Megasite.

Most concerns, though, focus on creation of the West Tennessee Megasite Authority, which gives a new board broad authority to contract with third-party vendors, control water and wastewater and sign contracts without public input.

Lawmakers took no action Monday other than to organize the special session. But some raised questions about the project’s escalating cost, the authority and even plant unionization.

State Rep. Robin Smith, a Hamilton County Republican, sent letters over the weekend asking about the project’s cost and the potential organization by the United Auto Workers.

“It really has more to do with how employees will have their rights observed when it comes to unionization,” Smith said, noting it is important for workers to be able to vote by ballot rather than by a card check.

Rep. Vincent Dixie, chairman of the House Democratic Caucus, said he expects the project to cost even more than $884 million.

“You’re always concerned with the bait and switch,” Dixie said.

Taking center stage on the first day of the Ford special session was discussion over the creation of the West Tennessee Megasite Authority, which will have broad authority to sign contracts with little public input or transparency.

He noted, however, he is more concerned about the seven-member authority, which is appointed largely by the governor.

“It can buy and sell property without approval by the state. … Overall, there are some things that need to be worked out, but it can be worked out,” Dixie said.

Rep. Gary Hicks, a Rogersville Republican, said he wasn’t surprised to see the overall number jump to $884 million because he had heard previously it would be “north of the $500 (million).”

In the weeks leading up to the special session, Gov. Bill Lee said the state would be providing $500 million in incentives for the Ford-SK Innovation project dubbed Blue Oval City where the automaker intends to invest $5.6 billion to create 5,800 jobs. Lee did not address the Legislature Monday night, though the governor typically speaks at the start of a special session he calls.

Instead, Lee’s office issued a statement saying, “Tennessee’s investment in the Megasite will have a generational impact on all 95 counties and cement our place as the national leader in automotive manufacturing. This special session will give Tennesseans a look into the funding process, and I thank the General Assembly for their swift action.” 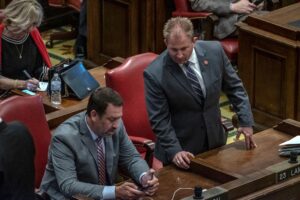 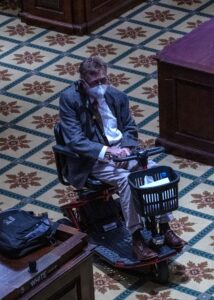 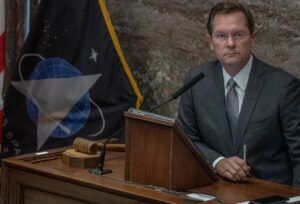 Speaker of the House Cameron Sexton at Monday's start of a legislative special session to vote on an economic incentive package for Ford Motor Co. (Photo: John Partipilo)

“That number’s always been there. I don’t think it’s grown since the deal. The deal was a deal and there’s different components of it. That made it $884 (million),” Sexton said.

The House Speaker downplayed the possibility that the plant could become a union shop, pointing out Volkswagen workers turned down the opportunity to organize at the Chattanooga plant.

“I think we’re all proud to be a Right to Work state, and if they put it to a vote to the employees, we expect the employees probably will vote it down,” Sexton said. He expects unionization to be discussed in House committees.

Besides a $500 million incentive, the bill designed to bring Ford to West Tennessee includes another $130 million for construction of water and wastewater systems and demolition at the site, a $40 million college of applied technology to train employees, $200 million for an Interstate 40 interchange and $5 million for consulting work. The project is expected to start Nov. 1 and open in 2025.

I think we're all proud to be a Right to Work state, and if they put it to a vote to the employees, we expect the employees probably will vote it down.

The Legislature got its first glimpse of a separate bill creating the Megasite Authority of West Tennessee, which will replace an existing state committee that has been working on the project for some 15 years.

“I think oversight is good,” Hicks said. “I think it’ll be incumbent on the General Assembly to make sure a lot of these ideas are carried out, such as 10-year clawbacks. But this is a big deal. … Everybody’s already got their nose pressed to the glass.”

The board, which will be attached to the Department of General Services, will cost another $675,000 for three executive positions to run the authority. It will have the ability to keep proprietary information secret for five years and to keep marketing materials closed if the authority believes it is necessary.

The board also would have the authority to make grants and incentives to bring other companies to the megasite.
The governor will make two appointments to the board, along with one each from the House and Senate speakers, and the commissioners or designees of the state Departments of Economic and Community Development, Finance and Administration and Revenue will serve as well.

The board will have authority to contract with third parties for construction of roads and other infrastructure needed for the Blue Oval City project. It also will hold authority over eminent domain and water and wastewater services at the site and the ability to lease and subdivide property.

The board would fall under open meetings laws. But under the legislation proposed by Gov. Lee’s office, the board would restrict public inspection of contracts and agreements until after they’re signed. And if the authority determines a contract or other documents contain “sensitive” information, it could keep those items confidential for five years, including financial matters.

The project is expected to generate 27,000 to support the work there, leading to more than $1 billion annually in earnings. It is expected to contribute more than $3 billion to the state’s gross product and provide $22.4 million in state tax revenue.