With some members calling it a “metamorphic moment” for West Tennessee, the Legislature approved a $900 million incentive package for Ford Motor Co. and, despite criticism, created a board with broad powers to oversee the project.

Wrapping up a special session, the Senate and House passed funding Wednesday for the campus dubbed Blue Oval City at the Memphis Regional Megasite as well as the megasite authority, on 27-3 votes and 90-3 votes respectively with two abstentions per chamber. Both chambers later concurred on the legislation, which will bring a $5.6 billion investment and 5,800 jobs to the state-owned 4,200-acre site in Haywood County, about 45 miles east of downtown Memphis.

It represents a metamorphic moment. This is our crossing the Jordan.

– Sen. Page Walley, R-Bolivar, who carried legislation for creation of a megasite authority

Sen. Page Walley, a Bolivar Republican who carried the megasite authority legislation, pointed out the Ford deal will be the largest and “most environmentally-friendly project in the country” and will benefit people across his district, from Stanton to “Nutbush city limits.”

Lawmakers noted that people in the region have been ignored for too long but will have opportunities for high-paying jobs at Ford or its joint venture with South Korea-based SK Innovation to produce batteries for the F-150 pickup truck called Lightning.

“It represents a metamorphic moment,” said Walley, who later added, “This is our crossing the Jordan.”

The legislation sets aside $725,000 to create an 11-member megasite authority, which includes a chief executive officer and seat for the governor, who will be able to cast a vote.

The primary incentive provides a $500 million grant to Ford, which will be reimbursed when it submits invoices to the state for construction work at the site. In addition, the state will spend $200 million to construct an interchange at roads at the location, $138 million for water and wastewater treatment facilities, including a line to the Mississippi River, $40 million for a college of applied technology, $5 million for consulting for local governments and another $21 million for workforce training.

The $900 million is to be paid with part of the state’s $2.2 billion in surplus funds from the fiscal 2021, and supporters noted it would not cause a tax increase.

Scenes from a special session: Oct. 2021 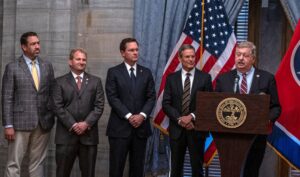 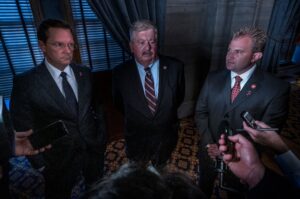 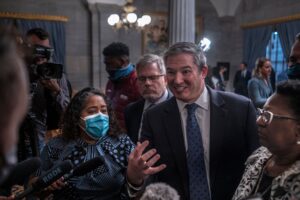 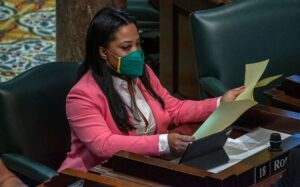 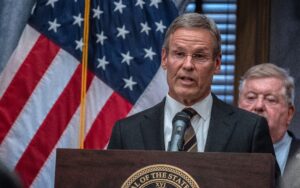 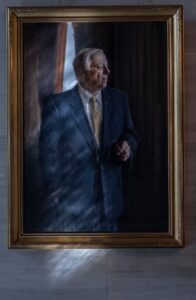 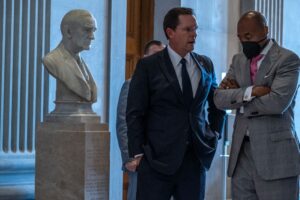 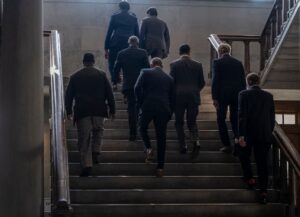 Members only: Legislators head upstairs in the Capitol for the vote on Ford's incentive packages. (Photo: John Partipilo)

Ford will pay $269 million over 30 years in lieu of taxes on the state-owned property, which will be leased to the automaker. The deal also includes a “clawback” in which Ford would be penalized if it fails to create 5,800 jobs after 10 years.

“This really is about those who have had limited opportunity, in part. It’s exciting to think about what it might mean for the next generation of Tennesseans, particularly for those in rural West Tennessee,” Lee said. “There are few days that feel as significant and important as a day like today.”

Construction on Blue Oval City could start by Nov. 1 and begin operations in 2025, when it is expected to generate 27,000 new jobs, $1.05 billion in annual earnings, $3.5 billion in gross state revenue annually and $22.4 million in state tax revenue each year.

Lt. Gov. Randy McNally admitted after the special session that he had been a “doubting Thomas” on the regional megasite at one point but noted he appreciated the work of the governor and Legislature to stick with it.

It started 14 to 15 years ago when the state purchased the property under former Gov. Phil Bredesen’s Administration and began putting money into the property to improve it. But lack of preparation cost the state a shot at a Mazda-Toyota production plant, which wound up going to Alabama.

Rep. Scott Cepicky, a Culleoka Republican who voted against the incentive package, said the Spring Hill GM plant is causing Maury and Williamson County to build too many schools and burdening taxpayers.

Since then, the question has been whether to keep plowing money into the megasite or wait until the state landed a suitor.

Economic and Community Development Commissioner Bob Rolfe said more than a year ago the state would hold up on a sewer line. Gov. Lee changed course in June, some five months after Ford Motor Co. started taking a serious look at Tennessee.

But while most lawmakers lauded the impact the Ford plant will have on the entire state, not everyone was enthused. Tennessee already has a General Motors plant in Spring Hill, Nissan in Smyrna and Volkswagen in Chattanooga, as well as a supply chain.

State Rep. Cepicky, a Culleoka Republican, complained that the GM plant, which is building a new electric Cadillac at its revamped Spring Hill facility, is causing Maury and Williamson counties to build too many schools, putting a burden on taxpayers.

Cepicky also pointed out he could not “turn a blind eye” to mask and vaccine mandates during this special session and vote in favor of the Ford project. The Legislature is to hold a special session starting next Wednesday to focus on COVID-19 requirements.

Saying he has experienced 37 years of “dealing with a Detroit automaker,” even though he is a relative newcomer to Tennessee, Cepicky pushed an amendment seeking to remove the power of eminent domain from the megasite authority, stop confidentiality from the board’s contractual authority, require education funding for Haywood and Fayette counties where the megasite is located, force the megasite authority to come before the Government Operations Committee each quarter and to have the Comptroller audit the board and its contracts annually.

Cepicky’s amendment was rejected handily, as was one by Democratic Rep. John Ray Clemmons of Nashville, who sought to change the makeup of the 11-member authority. Clemmons called for adding members from the Haywood County area and removing some of the governor’s authority.

Lee will serve as a voting member of the board, in addition to appointing two members along with the commissioners of the departments of Economic and Community Development, Finance and Administration and General Services and selecting the chairman. The House and Senate speakers will have two appointments each and share one.

“Let’s check and rein in the unilateral authority of the governor of this state, who has a history of poor contract decision-making,” Clemmons said. He referred to no-bid contracts the governor’s unified command group made at the start of the COVID-19 pandemic that turned into embarrassing moments for Lee.

Clemmons’ amendment failed, along with one by Rep. Robin Smith, R-Hixson, who sponsored a measure to guarantee an employee’s right to have a secret vote on organization by a labor union. Smith and Rep. Justin Lafferty, R-Knoxville, were present but not voting on the two pieces of Ford legislation.

Smith contends the United Auto Workers shouldn’t be able to organize with a card count, even though the governor’s office said this week Ford’s collective bargaining agreement allows those types of union votes.

I'm very, very concerned about the diversity and makeup of (the megasite authority.) I think it should have local people. It should be diverse when it comes to race and gender and ethnicity.

After the session, Lee defended the makeup of the megasite authority, which initially had seven members, not 11. Economic and Community Development officials said Ford wanted a “nimble and agile” board that could expedite state permits.

Americans for Prosperity-Tennessee criticized the incentive package for the project, saying it increased to $884 million from $500 million just before the start of the special session and created a board with too much authority.

“Unfortunately, these bills grow government by creating a megasite authority with sweeping powers, including the right to condemn surrounding properties with eminent domain for its private use. While it’s a historic investment in West Tennessee and a solution to a decades-long sinkhole for state funding, we are still going to stand on principle. We continue to oppose government picking winners and losers in business by giving away Tennessee’s hard-earned tax dollars to politically-connected companies,” said AFP-TN State Director Tori Venable. 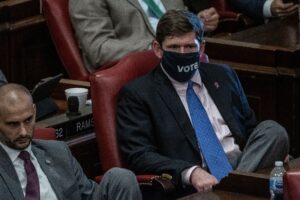 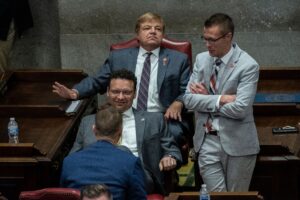 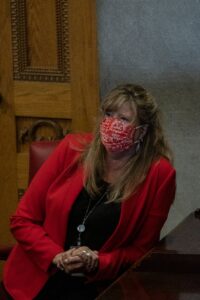 State Rep. Vincent Dixie, who voted in favor of the megasite funding as well as the megasite authority bill, said, however, he doesn’t believe the governor should serve on the board.

“I’m very very concerned about the diversity and makeup of that committee. I think it should have local people. It should be diverse when it comes to race and gender and ethnicity. That is my biggest concern,” Dixie said.

In addition, Dixie said contracts and records stemming from authority action should be open to the public. They are to be closed for up to five years if the new chief executive officer and board, working with the attorney general, believe they are “significant” enough to keep confidential.

Lee pointed out Wednesday that Tennessee is a Right to Work state, meaning employees can’t be compelled to join a union or pay union dues.

“The voters on that job site will determine their work environment, and Ford Motor Co. has been very clear about that, and so have we,” Lee said.