Saturday morning, I got up and had coffee as usual before donning my Stetson and walking from my house to downtown Franklin for a Civil War-themed event. The last gasp of the Confederacy in Tennessee came in fall 1864, so there’s no surprise that the weekend featured two Civil War-themed events and it’s not a shock one was in Franklin, which hosted one of the most brutal battles of the war and has made a cottage industry of Civil War tourism.

One of the two events was a reenactment of the Battle of Stones River, held in Lebanon.

The other event, the Franklin one, was an atypical sort of Civil War celebration that drew as many Black residents as white ones — and that IS unusual at events marking The Lost Cause.

A group of Franklin pastors joined city leaders Saturday to unveil the only statue of its kind in the state: a tribute to the United States Colored Troops, regiments consisting of freed slaves who fought in the Union Army. The sculpture, named “March to Freedom,” depicts the dynamic energy of a soldier on the move, his face alive and electric with determination.

I can’t tell you what the Lebanon reenactment was like, but I can tell you the Franklin event was a beautiful and emotional gathering that brought years of work by the pastors to fruition, through an effort aptly named “The Fuller Story.”

“He went into the courthouse and came out with papers to fight for his own freedom,” said Pastor Hewitt Sawyers of West Harpeth Primitive Baptist Church, speaking during Saturday’s ceremony to unveil “March to Freedom.” Sawyers, along with Pastors Chris Williamson of Strong Tower Bible Church and Kevin Riggs and Walter Simmons of Franklin Community Church, are the nucleus of The Fuller Story.

The quartet of pastors first approached town leaders in 2017 after a white supremacist rally in Charlottesville, Va., shone a brighter than ever spotlight on memorials to the Confederacy. It was past time, the pastors pitched, to tell the whole story of the Civil War in Franklin —not just of the battle but of the county’s freed slaves who served in the uniform of the United States. It was past time, the group said, to place markers in front of the antebellum courthouse pointing out slaves were sold from that spot. 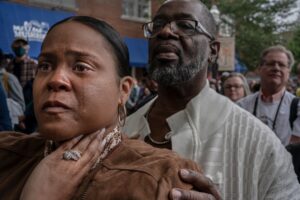 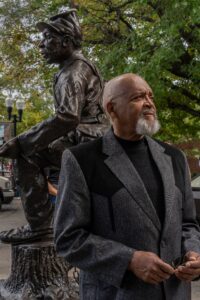 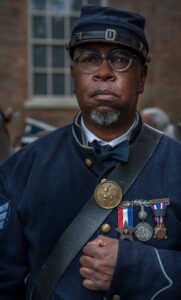 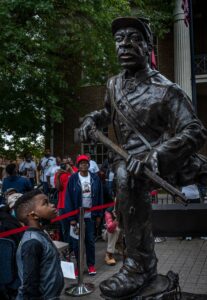 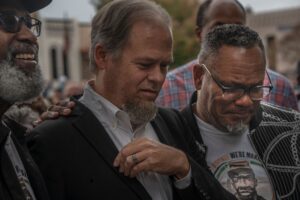 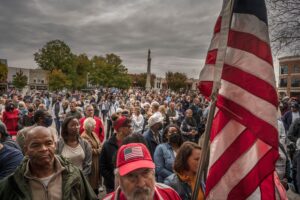 Hundreds gathered for the emotion-filled ceremony to unveil "March to Freedom" in Franklin. (Photo: John Partipilo) 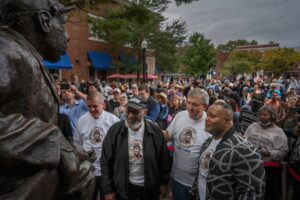 Even more recently, in my own lifetime, Black residents were denied rights as simple and basic as walking through the front door of that government building.

I looked around the diverse group at the gathering and saw many of my fellow townspeople, Black and white, old Franklin and newer transplants, choking up, openly weeping at the acknowledgement of the role our Black citizens have played in creating our town and at how long that recognition was denied.

I was one of those suffused with emotions: Grateful to know the members behind The Fuller Story initiative and pride in my town’s leaders for taking a step other towns haven’t. It’s truly powerful to contrast the vibrant “March to Freedom” with the Confederate monument directly across the street.

And yes, I also feel shame for what those who came before me had been responsible for.

And I felt an emotion I find hard to put into words — irritation is too slight, anger too strong — for Williamson County’s group of legislators who, to a man, voted to pass a law making it illegal to teach “critical race theory” in our schools. Critical race theory is a high level academic concept that is not taught in any Tennessee primary or secondary schools but has become a hot button among conservatives.

These days, a Tennessee educator who teaches about the importance of the United States Colored Troops could find him or herself slapped with a complaint for violating the new law.

“As parents you don’t want to tell your children everything but when the time comes, tell them everything,” said Joe Frank Howard, a Paris, Tenn. native and sculptor of “March to Freedom.” “There’s more to the story than there is in the history books.”

I never thought I’d see the day a statue of a Black soldier stood in my town square, but there it stands, and we are the better for it. Franklin has evolved. Here’s to continued evolution there and across the state.