Andrew Byrd at the farm he owns with his wife, Marianne Menefee Byrd, on historic Holly Tree Gap in Williamson County. The Milcrofton Utility District wants to blast a 40-foot cliff into Byrd’s property for construction of water tanks. The property includes a portion of the Middle Road, which was built in 1799 as a road for early settlers. Photo: John Partipilo)

Holly Tree Gap is a quiet, three-mile stretch of winding road flanked by woods, meadows and horse pastures, with only a few of the spacious homes that characterize much of the rest of Williamson County along its path.

But in recent weeks, a proliferation of white signs with black lettering have begun to appear, signaling upset along the scenic stretch: “Save Holly Tree Gap from Milcrofton.” the signs say.

Milcrofton Utility District provides water to about 30,000 residents in southeast Williamson County, and it wants to blast a 40 feet cliff into a hilltop to build two 2-million-gallon water tanks on farm property owned by a local family. The property lies next to the remnants of a historic corridor used by early settlers and Civil War soldiers — and just a few feet outside the city limits of Brentwood, which has banned hilltop construction since 2013.

The landowners — Marianne Menefee Byrd and her husband Andrew — have refused to sell, citing the historic and unspoiled nature of the land and their rights as owners to use and preserve it. Attorneys for Milcrofton are now taking the family to court to seize the land. Utility officials say they face expanding demand for water from a customer base that has doubled in the past ten years as the population in Williamson County has boomed.

The Byrds have no intention of selling their Holly Tree Gap farm, and say the dispute highlights the power of small utility districts, led by unelected leaders, to seize private property. Officials with Milcrofton say their responsibility is to provide water for the public and can’t give special treatment to the Byrds.

Scores of lawsuits are filed each year by state, county and municipal governments to obtain property from unwilling sellers under Tennessee’s eminent domain laws — for roads, sewer lines, water towers and other public uses. Most take place with little notice.

But the increasingly rancorous fight between the Byrds and the water district has spilled into public view in recent weeks, with accusations and counter accusations of outsized personal privilege and unchecked government power.

“The Byrds are a prominent and influential family that has been quoted as ‘declaring war on Milcrofton,’” Milcrofton general manager Mike Jones said in a statement last week. “However, as a governmental entity, Milcrofton cannot give them or anyone else preferential treatment over neighboring landowners, or Milcrofton’s thousands of customers seeking water.”

Andrew and Marianne Menefee Byrd are both the second generation in their families to serve as benefactors of the Iroquois Steeplechase horse race and serve as philanthropists and board members of hospitals and nonprofits with wide-ranging interests in conservation, healthcare and Democratic party politics. 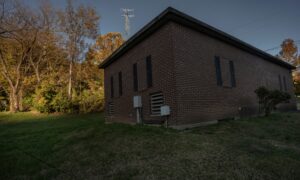 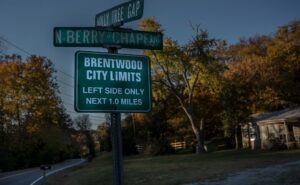 A sign marks the division between Franklin and Brentwood at Holly Tree Gap. (Photo: John Partipilo) 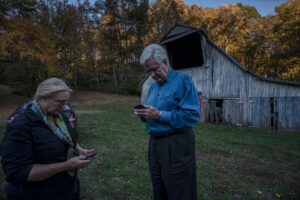 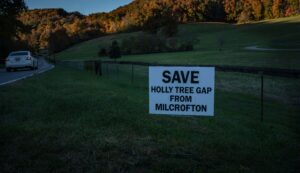 Signs have popped up along Holly Tree Gap, a three-mile stretch of road in Williamson County. (Photo: John Partipilo)

The dispute, the Byrds say, highlights the power vested in even small utility districts, led by unelected leaders, to confiscate the land of private citizens with little chance for public scrutiny.

“It is our privilege to care for one of the last untouched pieces of property along this route and, yes, Andrew and I are comfortably situated,” said Marianne Menefee Byrd. “No one else has had the wherewithal to fight Milcrofton. We have no desire for these monstrosities to be placed on Holly Tree Gap Road. “

“These people are kind of without real restraints,” Andrew Byrd added, saying the utility district has the “unmitigated ability to go after anyone. What happens to people if you don’t have significant resources? You don’t have the ability to oppose this.”

The utility’s three-man board, who are appointed by the county mayor but do not report to him, are the sole decision makers in pursuing the Holly Tree Gap property. The board was not required to post any public notice, go before a zoning board or weigh community input before taking legal action to acquire property on which they intend to erect two 2-million gallon cylindrical metal tanks whose height and girth, the Byrd’s fear, will dominate views of the hillside.

The Byrds have drawn on their considerable resources to fight the plan, hiring their own engineering firm, whose assessment of the site has raised questions about its stability under the weight of 4 million gallons of water. They have also retained high-powered Nashville land use attorney Tom White. Also representing the Byrds is Nashville public relations firm, DVL Seigenthaler, whose representative, Bob Martineau, served as a cabinet member during former governor Bill Haslam’s administration.

Martineau said the Byrds have pointed out alternative sites available for water tanks within the Milcrofton utility district that are currently for sale — the Byrds’ property lies in another utility district’s footprint. They have also raised questions about the lack of geological and archaeological surveys of the property, which the Byrds contend is full of brittle shale.

The law is strongly in favor of a governmental enity that has the power to condemn. Utility districts are public entities and a creation of state law and courts generally don't look too much at the condemning authority's decisions.

Last week, the Heritage Foundation of Williamson County weighed in, too. One of the original sections of the Middle Road, the original 1799 road between Franklin and Nashville, lies in close proximity to the proposed water tanks. The road, a wide dirt path still visible through the woods on the property, was also the route taken by retreating Confederate soldiers after the fall of Confederate General John Bell Hood in 1864, according to the foundation. The historical society has asked the utility district to reverse their decision.

“It would be a significant loss for Williamson County history,” said Rachel Finch, senior director of preservation and education.

A change.org petition to oppose the plan has thus far gotten more than 2,000 signatures.

Property owners face an uphill legal battle when public entities sue to seize land, according Rob Quillin, a Knoxville attorney uninvolved in the dispute who has represented both utility companies and private landowners in eminent domain litigation.

“The law is strongly in favor of a governmental entity that has the power to condemn,” Quillin said. “Utility districts are public entities and a creation of state law and courts generally don’t look too much at the condemning authority’s decisions. They generally defer to a government entity if it decides to locate a highway or build a water tower, they won’t look behind that decision and say, ‘maybe there’s a better place to do that.”

“Most people end up selling the property and often the issue ends up being the amount of compensation” not the right to seize the property,” he said.

The Byrds say they have no intention of selling. Marianne Menefee Byrd grew up on the property and she still rides horses across the 300 acres the couple own. The proposed site for the water tanks, flanked on one side by the road and the other by woods, will cut her off from a portion of the property she regularly rides today, she said.

The condemnation lawsuit Milcrofton filed against them in October is expected to go before a Williamson County Circuit Court judge in January if there is no settlement.

While there is no current shortage of water in Williamson County, as the population surges — Census data shows a 30% population increase in the past decade — developments in Milcrofton’s southeast Williamson County jurisdiction are increasing the demands on existing water lines and pumping stations.

Milcrofton’s customers in subdivisions like Avalon, King’s Chapel, Falls Grove, and The Highlands at Ladd Park are increasing utilizing water, especially for irrigation, according to Milcrofton’s analyses. The Byrd property already contains 30” water pipes that will allow the utility to economically transfer water from the tanks downhill to their customers, according to company officials.

Once Milcrofton has access to the site, it will make sure the ground is stable before erecting water tanks, Mike Jones, Milcrofton’s general manager, said in a statement.

“It’s no secret that the population of Williamson County is booming,” said Jones.“We have a responsibility to serve water to tens of thousands of people and plan for the growth we know is happening…The Byrds are entitled to look out for themselves, but Milcrofton is looking out for the public.”