A house in Mayfield, Kentucky, photographed by John Partipilo on Dec. 12, 2021.

At least four people in Tennessee are dead after tornadoes ripped through northwest Tennessee and Kentucky early Saturday morning.

The National Weather Service confirmed seven tornadoes touched down in Tennessee but haven’t confirmed if the same tornado damaged Tennessee and Kentucky.

The most severe damage was to Mayfield, Kentucky, about 35 miles north of Dresden in Graves County, which borders Tennessee. The town sustained a direct hit that wiped out most of the downtown area.

Photojournalist John Partipilo traveled to the area Sunday to document the devastation. 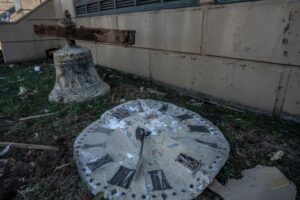 The courthouse in Mayfield with clock and bell. (Photo: John Partipilo) 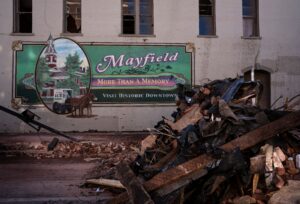 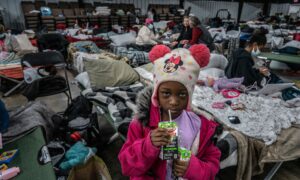 At The Way Church and Community Center in Wingol Kentucky, Amora Noelle, 5, sips on a drink at the shelter. Her families apartment was completely destroyed.(Photo: John Partipilo) 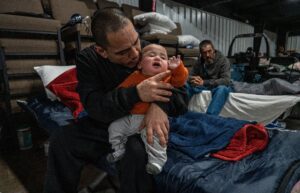 Anthony Vasquez and his son Michael, four months old, were given shelter and food by The Way Church and Community Center in Wingo. Vasquez said that he and his family were in a closet in the house. Most of the house was destroyed but the closet protected them. (Photo: John Partipilo) 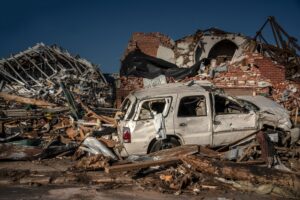 A mangled SUV sits among the ruins of Mayfield buildings. (Photo: John Partipilo) 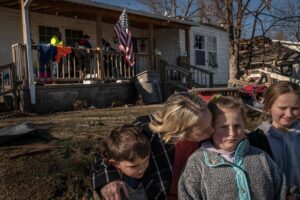 Grandmother Barbara Patterson kisses her great grandchildren from left :Lane Richard, 8, and sisters Emily Farmer, 9, and Alexis Farmer, 10. Patterson lived in her home in Mayfield for 36 years but the tornado has destroyed most of the home. (Photo: John Partipilo) 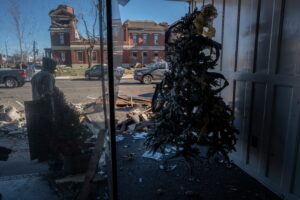 The courthouse in downtown Mayfield was destroyed by the tornado. Photo shot through a window across the street with a Christmas tree. Christmas will be a difficult holiday this year for most residents who lost everything. (Photo: John Partipilo) 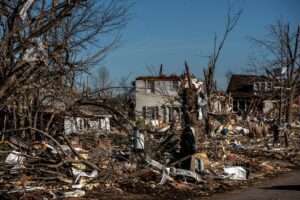 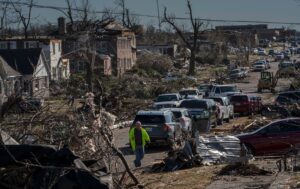 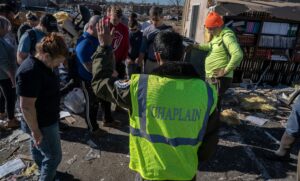 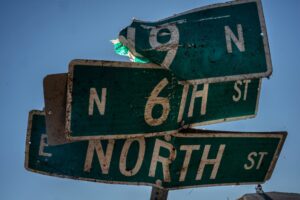 Street signs in downtown Mayfield were twisted by the tornado. (Photo: John Partipilo)