Essential workers, misinformation and fear over immigration status have contributed to illness and business closures

On Sunday, staff at El Hornitos Bakery in Nashville celebrated their seventh year in operation knowing they are among the Latino businesses that survived a pandemic that has devastated the community.

It’s been nearly two years since COVID-19 spread among Nashville’s Latino residents, and as the months ensued, El Hornitos owner Luis Rojas, noticed more and more shops closing around them, even outlets from which they bought baking products. At one point, he had felt the pandemic’s grip on their storefront when sales plummeted.

But thankfully, “something as simple as bread should not be missing from the dinner table, and that’s something that’s allowed us to stay in business,” said Rojas.

The rest of the community has not been so lucky.

According to Pew Research, immigrants, mainly Latino and Asian, were hit harder than U.S.-born workers at the beginning of the pandemic, a fact reflected by COVID clusters centered around Latino communities in Nashville’s Southeast neighborhoods.

In June 2020, Latino immigrants comprised 67% of Nashville’s total positive COVID-19 cases, despite only being 10% of the population. As of Monday, Latinos accounted for 11% of all positive COVID cases.

Several pre-existing barriers were to blame. Despite Latinos working as a high percentage of essential workers, immigration documentation status has created circumstances that prevented them from having access to federal programs. Before the pandemic, the community had all but come to terms with the fact that they had little to no access to job-related benefits, healthcare and work-site protections, as long as they remained undetected.

“They don’t have health insurance, they don’t regularly go to the doctor, they don’t have a primary doctor, and of course, that creates not only a lack of knowledge but also a lack of trust, lack of continuity of what health means,” said Martha Silva, of Conexión America. “The pandemic was new for all of us.” 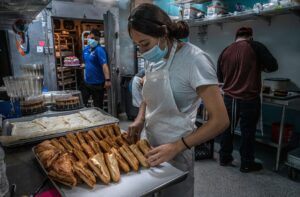 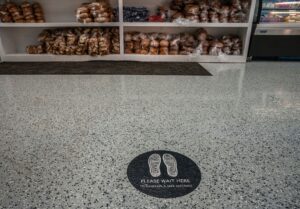 El Hornito almost closed at one point during the the last two years but has managed to stay open. (Photo: John Partipilo) 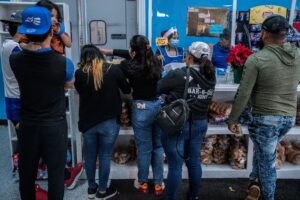 Customers line up for orders at the bustling El Hornito bakery in Nashville. (Photo: John Partipilo) 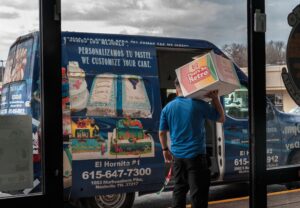 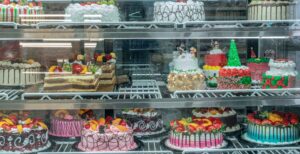 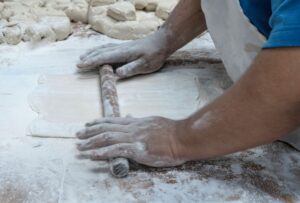 "Something as simple as bread should not be missing from the dinner table, and that’s something that’s allowed us to stay in business," said owner Luis Rojas. (Photo: John Partipilo)

But as the pandemic continued with no end in sight, these three fronts came to a head.

“Why did we get sick the most? It goes back to the lack of healthcare. Also the type of jobs that many Latinos had, which were frontline workers, with no sick days and no benefits,”said Silva. ”These were people that if they did not show up at work, they don’t get paid, or lose their jobs. This pushed many of our families to go to work even if they had symptoms or they were not confident about their safety at work.”

Workers were reluctant to complain for fear of losing their jobs and had limited protections under Tennessee law, with lawmakers passing a law protecting businesses from liability.

Those who became unable to work due to sickness were left without income. Many were supporting families in over countries hit harder by the pandemic.

“Those are the reasons, the outcome of course is high levels of displacement from the workplace, even some level of homelessness that we didn’t see before,” said Silva.

Apart from these problems, immigrant-rights organizations reported that employers were offering few protections from COVID at work, knowingly exposing workers to COVID or using worker’s documentation status to prevent complaints.

Poor working conditions led to COVID hotspots among fields with many Latino immigrant workers. In Nashville, construction sites accounted for second place in COVID clusters. Across Tennessee, a Tyson plant in Shelbyville closed due to a COVID-19 outbreak, while Tyson plants nationwide reported equally staggering numbers of positive COVID cases.

Why did we get sick the most? It goes back to the lack of healthcare. Also the type of jobs that many Latinos had, which (included) frontline workers with no sick days and no benefits.

On one occasion, Lookout reporters found that migrant workers at a farm in Rhea County continued to tend the fields, despite reports that 100% of the staff had tested positive for the virus. Only a few migrant workers were seen wearing ragged scarves around their faces.

Once sick, Latino immigrants were often reluctant to seek medical care due to mistrust in the healthcare system.

Spanish-news reporter Veronica Salcedo has spent the pandemic working to disseminate information from the Metro Health Department within immigrant communities.

Early in the pandemic, the community often relied on misinformation from their home countries and social media. Several months in, Metro Health officials translated important information into Spanish, but they also had to halt a controversial decision to share COVID-19 patient information with law enforcement, which further enhanced immigrants’ distrust in government.

Salcedo worked with the Metro Health Department to hand out masks and encourage people to get vaccinated as the vaccines became available. If these efforts didn’t work, Salcedo found herself driving people to the hospital after finally convincing them to seek help, even if they were at death’s door.

“I’m honestly surprised I never became ill because I was in direct contact with sick people, but I told myself that I had to do it because people needed me,” she said.

“They eventually realized that these precautions weren’t to deport them but to save their lives,” she added.

Of those who recovered, some were unable to return to work due to the long-term effects of COVID. And with limited access to safety nets, along with looming hospital bills, many faced homelessness.

Workers Dignity director Cecilia Prado has spent most of the last 22 months advocating for immigrant workers and tenants facing job loss and homelessness.

Although federal rental assistance programs became available to residents without a social security number, immigrant Latinos had difficulty accessing the programs due to difficult applications, said Prado. And while there was a federal moratorium in place, immigrant residents continued to be displaced at alarming rates.

In at least two incidents, developers attempted to evict tenants at Mosaic Apartments and Dickerson Pike  in order to redevelop the area of upscale buildings. Workers Dignity, metro officials and others intervened, allowing some tenants to remain in their homes. Others were eventually able to settle to allow families the ability to move elsewhere.

“It seemed like developers were waiting for this and taking advantage of a bad situation,” said Prado.

“We’re entering a very dark time in terms of the economy for many of our families,” she said.

Despite dealing with scarce resources, the Latino community made efforts to help each other.

As families became ill and unable to work, the rest of the community made efforts to leave necessities at their door.

In one instance, community members raised funds to allow a COVID-positive mother to isolate in a hotel, said Salcedo. For residents that succumbed to COVID, the community raised the thousands of dollars needed to send their bodies back to their country of origin.

“La tortilla volteaba,” said Salcedo, explaining that the community learned to assist each other in their time of need.

At El Hornitos Bakery, customers flitted in and out, holding glistening cakes topped with colorful fruits.

As December comes to a conclusion, the Latino community prepares for a month of celebration. Despite a dark cloud hanging over the community’s head, surviving another year in the pandemic was cause for celebration, although with a word of caution.

“I do ask everyone that even if you’re vaccinated, keep taking care of yourselves because someone else may be vulnerable to the disease,” said Rojas.  “It’s better that we keep taking care of ourselves with the knowledge that this [pandemic] will pass soon and we can continue forward working. Together we can do this.”