The second year of the COVID-19 pandemic meant that issues related to it stayed at the top of the news, from debates over masking and corporate vaccine requirements to whether Tennessee’s medical board can punish physicians for giving out incorrect medical information about COVID.

But with three special sessions in addition to the regular legislative session, the Tennessee General Assembly also dominated the Lookout’s coverage in 2022. Gov. Bill Lee began 2021 with a session devoted to education issues. The announcement Ford Motor Co. will set up shop in West Tennessee precipitated another session to approve a whopping incentive package and that one was followed by a COVID-exclusive package — the necessity of which was questioned both before and after.

While this list isn’t exclusive and there were plenty of other important stories through the year, this summarizes the issues that permeated 2021.

Federal agents searched the homes and offices of lawmakers in an early January raid on the eve of the General Session’s opening day. They went through the homes and offices of former House Speaker Glen Casada and Reps. Robin Smith and Todd Warner, as well as the office of Rep. Kent Calfee and the home of Casada’s former chief of staff, Cade Cothren. Federal agents haven’t tipped their hand on the subject of their investigation. But it is believed to be tied to upstart vendors that ran political campaigns, including a mysterious company called Phoenix Solutions, which was based in New Mexico but went underground when news reporters started asking questions. House Speaker Cameron Sexton, who replaced Casada, put three House staff members on leave as a result of the raid. (Jan. 8) 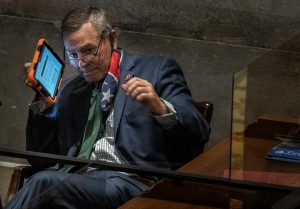 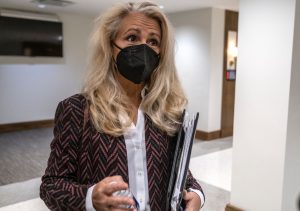 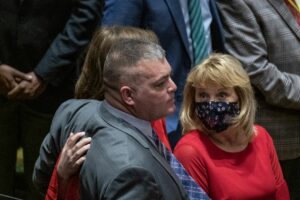 Rep. Todd Warner, R-Chapel Hill, was elected in 2020 and has been under investigation his entire career in the House of Representatives. He still passed five bills. (Photo: John Partipilo)

Legislature cracks down on transgender community

The General Assembly passed legislation in 2021 requiring businesses to post signs on restrooms letting customers know transgender people could be using them. The measure was immediately challenged after Gov. Lee signed it into law. The Legislature also passed a bill prohibiting transgender students from playing athletics with their identified sex. It is being challenged in court as well. (June 25)

The Department of Health fired its vaccination director, Dr. Michelle “Shelley “Fiscus, after she sent a memo to drugstores and other vaccine “partners” letting them know about the state’s mature minor doctrine, which enables some children to obtain medical treatment without parents’ permission. Lawmakers angry about the memo forced the department to fire Fiscus, who then said she was the scapegoat for Gov. Bill Lee and Health Commissioner Lisa Piercey, whose offices approved the state’s vaccine campaign for adults and children. (July 15)

Gov. Bill Lee and Economic and Community Development Commissioner Bobby Rolfe persuade Ford Motor Co. to build Blue Oval City, a massive electric truck and battery facility at the Memphis Regional Megasite in Haywood County. Ford plans to invest $5.6 billion and hire 5,800 people to work at the facility, which is slated to be the most environmentally-friendly motor vehicle manufacturing plant in the world when it opens in 2025. (Sept. 27)

Legislators were prepared to pass a comprehensive COVID-19 bill designed to fend off what Republicans called federal overreach in late October. But on the session’s final day, a Ford Motor Co. official sent senators a message letting them know the company was concerned about language prohibiting mask mandates. Tennessee business groups were upset by the legislation, as well. Lawmakers immediately began backtracking and, after closed-door, late-night meetings, passed legislation designed to give companies more leeway on mask mandates and vaccine requirements. (Oct. 29)

First came the fight over the Byhalia Pipeline, an oil pipeline proposed by Valero Energy and Plains All American Pipeline that was slated to run through some of Memphis’ historic Black communities. The public outcry over the project caught the attention of national figures like former Vice President Al Gore and civil rights leader Rev. William Barber, both of whom traveled to Memphis to speak out against the project. Barely had the pipeline been shot down before Black Memphis found out the Tennessee Valley Authority was preparing to move coal ash — a toxic byproduct of coal burning — to Southeast Memphis. (April 9  and Nov. 15.)

On Aug. 22, flash floods ripped through Humphrey County, killing 22 people. Tornadoes destroyed homes and caused millions of dollars worth of damage in Middle and West Tennessee in December, in addition to leaving Mayfield, Kentucky in despair. The small town in Western Kentucky was left in ruins and dozens of people were killed when an EF-4 tornado hit Dec. 10-11. (Aug. 23 and Dec. 13)

State Sen. Brian Kelsey, R-Germantown, was indicted in 2021, along with a Nashville businessman, for allegedly funneling tens of thousands of dollars from his state account to his failed 2016 congressional campaign. A trial was set for Jan. 18 in federal court, but Kelsey’s attorney got a delay until Jan. 2023. State Sen. Katrina Robinson, D-Memphis, was convicted of illegally using a federal business grant for personal expenses in October. She has appealed the jury’s decision, and it is unclear whether she will be able to run for re-election in 2022. She faced another trial in late January on separate charges but was accepted into a pre-trial diversion program that also dismissed wire fraud charges against her. (Oct. 1 and Oct. 28 )

The Legislature passed four bills in a January special session costing some $160 million in an effort to bolster K-12 education amid the COVID-19 pandemic. The contracts led to questions, though, after Education Commissioner Penny Schwinn filed a conflict of interest report showing her husband, Paul, works for one of the vendors that wound up receiving an $8 million contract to train teachers on student literacy. The contract was extended in December for another $8 million and two more years. (Dec. 8)

Several counties in East and West Tennessee filed lawsuits against global consulting firm McKinsey & Co. for its role in the opioid opidemic that has ravaged the state.

The lawsuits were filed 10 months after Tennessee Attorney General Herbert Slatery announced the state had joined a multi-state settlement with McKinsey. Tennessee was awarded a share of the $573 million settlement, along with 47 other states. McKinsey played a key advisory role with Purdue Pharma, maker and marketer of the synthetic opioid Oxycontin.

But county officials pointed out there was little information on whether this money would go to affected counties, who are seeking to recoup costs associated with opioid-related addiction treatment and care. Other costs included caring for children whose parents were incapacitated by opioid addiction or incarcerated. (Dec. 9)

The once a decade processing of redistricting began later than usual, after the COVID pandemic disrupted the 2020 U.S. Census process. Shortly after an ad-hoc legislative committee began work in September with promises of transparency and public input, redistricting devolved, as is customary, into partisan fighting, accusations of gerrymandering and concerns about a lack of minority representation. A draft map of state house districts pits Democratic representatives against each other in Memphis and Nashville. The Senate map hasn’t been released yet nor has a congressional map. the latter of which could result in the loss of a safe Democratic seat. (Dec. 17)