In spite of evidence that Black voters would lose their influence in elections, the Senate Judiciary and House State Government committees approved three redistricting plans for new state House, state Senate and congressional maps. New maps are drawn every decade after the federal census to reapportion state and federal districts to ensure equity at the polls.

But the map wasn’t available for review at the meeting, and it wasn’t enough to keep her from questioning each plan and raising questions about the impact of redistricting on Black voters.

Members of Black Voters Matter Fund, The Equity Alliance, TIRRC and the NAACP held signs urging the committee to reject the plan as Gilmore challenged plans to split Davidson County into three congressional districts, effectively changing the 5th District from roughly 34% Black vote, 41% minorities, to about 12% and the Hispanic vote to 10%.

Democrats say the plan will hurt both rural and urban voters.

This is not a just cause they are fighting for. And power maintained this way will not last.

Democrats and other critics contend the congressional redistricting plan is designed to give the Republican Party an 8-1 edge in the Tennessee delegation, instead of the current 7-2. Each district contains the same number of 767,871, except for one that has one more person.

But Senate Judiciary Committee Chairman Mike Bell, a Riceville Republican, argued that Democrats gerrymandered district maps for years to give themselves an advantage. He noted the map drawn by Republicans in 2012 was the first one to withstand a legal challenge in 40 years. 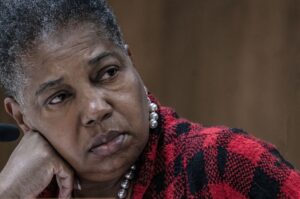 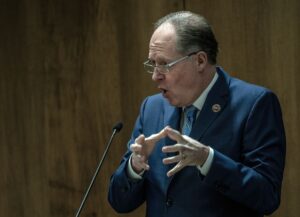 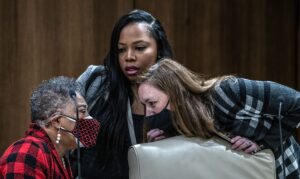 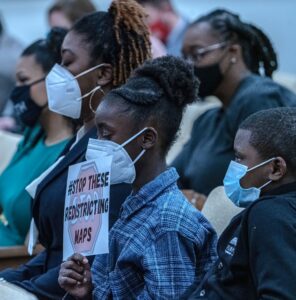 Charlane Oliver of The Equity Alliance, center, with two of her children. (Photo: John Partipilo) 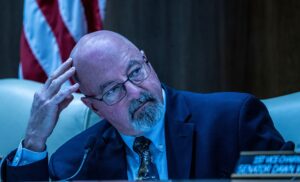 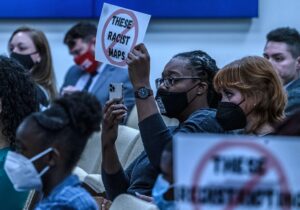 Odessa Kelly, Democratic candidate for the 5th Congressional District, was among the crowd protesting the new maps. (Photo: John Partipilo)

Republicans continually point toward a 4th Congressional District adopted in 1992 that ran from Savannah in West Tennessee to Morristown in upper East Tennessee as an egregious gerrymander. It was represented by Cooper in the early 1990s, then Republican Rep. Van Hilleary, then Democratic Rep. Lincoln Davis when it was redrawn, before he lost to Republican Rep. Scott DesJarlais.

However, Gilmore countered, saying, “The unintended consequences should not be that we are diluting the power of the Black vote,” Gilmore said. “In almost all instances, Black voters will not be able to vote for their candidate of choice.”

Bell acknowledged after Tuesday’s meeting that the Republican plan adopted is not as compact as a Democratic plan presented by Sen. Jeff Yarbro of Nashville. The Democrats’ plan was rejected in a 7-2 vote after the Republicans’ plan was approved and sent to the Calendar and Rules Committee to be scheduled for a floor vote.

Asked if this is an effort to water down Cooper’s 5th District with Republican votes and give the GOP an 8-1 advantage, Bell would only say, “I think the map we presented will withstand constitutional muster.”

He conceded, however, that Democrats could win the 5th, 6th and 7th districts in two to three voting cycles. “It very well could happen, it could happen this time,” he said.

Senate Majority Leader Jack Johnson also defended the congressional map, contending it will give Davidson County three members in Congress. The criticism is that they might not live in Davidson County.

Under questioning by Sen. Katrina Robinson, a Memphis Democrat, Johnson conceded that the Senate Republican Caucus hired outside counsel to provide advice on the redistricting map but he declined to identify the attorney.

He later confirmed it was John Ryder, who has been chief counsel for the Republican National Committee, chairman of the RNC Redistricting Committee, and a delegate who voted for President Donald Trump in 2016. Johnson, a Franklin Republican, said he declined to answer during the committee meeting because he didn’t want to be put on the spot. However, he said the caucus reported on disclosure forms payments to Ryder.

Johnson pointed out that Robinson declined to answer when he asked her if the Senate Democratic Caucus hired its own outside counsel.

Several people in the audience cackled when Johnson declined to divulge Ryder’s name. But it had been reported in the Tennessee Journal already when he spoke at the caucus’ fall retreat and told senators to talk about the redistricting plan on the phone only, instead of putting anything in writing.

“This is not a just cause that they’re fighting (for),” Garland said, arguing the maps are designed merely to keep Republicans in power. “And power maintained this way will not last.”

Any time, a large number of minority residents are split and moved into districts with a large number of white residents, “you are splitting the vote, you are dissecting, you are causing the Black people not to be able to elect candidates of their choice,” Garland said.

During the House committee meeting, Rep. Darren Jernigan, D-Old Hickory, pointed out Davidson has been kept whole for more than 140 years. He noted Davidson has a metropolitan form of government and its residents have shared interests.

Republicans have also noted that Shelby County has been split. But Shelby’s population is too large for it to be contained in one district.

Rep. Bill Beck, D-Nashville, contended that Davidson County collects 33% of the state’s tax revenue and questioned why it would be split.

Himes responded that it complies with statutory guidelines.

“It saddens me for the people of Davidson County,” Beck said, in part because of the potential for poor constituent service.

Beck also questioned Himes about a “fishtail” in the map going down the street where Rep. Dixie lives, placing him outside the 54th District, putting him in a district with an 80% white vote.

Himes said he probably wasn’t the best person to ask but noted that it’s a bad plan to pack African Americans into one or two districts. The counsel said the plan does comply with the Voting Rights Act.
Afterward, Dixie was apoplectic.

“It’s not about me and my house. That particular map is disenfranchising and diluting the voters of my community,” he said. “It splits up a voting block.”

Dixie argued the group of voters will be moved into another district to vote with people who share little in common. He said he won’t run against Rep. Mitchell this year, but will move in order to seek re-election.