Less than a week after notifying Sen. Katrina Robinson she would face an Ethics Committee hearing, the panel expedited a move Thursday to expel her from the Senate.

In two 4-1 votes, with the only opposition coming from fellow Memphis Democrat, Sen. Raumesh Akbari, the committee found Robinson violated the Senate’s ethics rules, then recommended she be ousted from the legislative body. No hearing before the full Senate has been scheduled.

Robinson contended afterward the committee discriminated against her. But Lt. Gov. Randy McNally sent out a statement encouraging her to step down before the full Senate considers the panel’s recommendation to expel Robinson.

The panel based its decision on felony convictions in which a jury found Robinson committed two counts of wire fraud totaling less than $3,500 by using federal grant money for her business, The HealthCare Institute, on personal expenses, including her wedding.

It also pointed toward a pre-trial diversion agreement she made with the court after being charged with conspiracy to defraud a potential student at her nursing school out of $14,000. In that case, she did not admit guilt, and it will be wiped off her record as long as she completes a probationary period without problems.

Robinson, who said she was notified of the meeting on Jan. 14 at 4:45 p.m., did not have her attorney with her and was given only a cursory opportunity to defend herself.

Ethics Committee Chairman Ferrell Haile, a Gallatin Republican, pointed out several times the committee was charged only with finding probable cause that Robinson violated the chamber’s ethics rules, not whether she was innocent or guilty of a criminal offense.

Robinson did not have her attorney with her for the ethics hearing and was given only a cursory opportunity to defend herself. Sen. Raumesh Akbari, the only Democrat on the panel, argued the committee should delay the hearing to give Robinson’s attorneys time to show up and defend her.

The committee met privately Jan. 10 and voted 4-0-0 to move forward with the Thursday hearing. Robinson chose to speak and defend herself, even though she didn’t have to.

Haile contended that the committee gave “great deference” to Robinson in its decision. At the end of the hearing, he noted, it wasn’t “pleasant” to take the action. Nevertheless, none of the Republican members of the committee voted to back Robinson.

Akbari argued that the committee should delay its hearing to give Robinson’s attorneys time to show up and defend her. She also pointed out sentencing is not scheduled until March 3 and that anything could happen between now and then.

Afterward, Robinson was apoplectic, calling it a “complete display of an abuse of power.” She said she was told the Ethics Committee would be considering conduct only, not the case that went to pre-trial diversion and one that remains open.

The feds charged her in July 2020 with 48 counts in connection with $620,000 she allegedly stole from a federal grant for her nursing school. But those were reduced to a two-count conviction of wire fraud totaling $3,484. Robinson said her attorneys are still considering whether to file motions asking for reconsideration, even though the judge recently dropped two convictions and denied her request for a new trial.

Shaken but composed, Robinson called the procedure unfair and discriminatory, because she was told the panel would be discussing behavior, not her legal cases.

“And we have several senators who are sitting in that body with me who have unethical behavior that has not been addressed by this body,” as well as several people serving in the House, she said.

Robinson and Akbari both pointed out the charges against Robinson related to events that took place before she won election to the Senate in November 2018.

Akbari noted sentencing on the felony conviction would avert the need for the Senate to take action because Robinson would automatically be eliminated from serving.

Only her attorneys would have been able to answer some of the questions relating to her criminal case, she said.

But Robinson claims she wasn’t given due process or adequate notice. Her attorneys had scheduling conflicts and asked for a delay but were turned down.

At one point, committee members appeared to be uncertain about what steps to take. Following the vote in which they found she had violated ethics rules, they called a five-minute break to consult their attorney, then came back and voted to recommend she be ousted by the full Senate.

In a press conference afterward, Robinson said, “How can someone expect to get a fair hearing in front of a committee that’s made up of four Republicans, one Democrat, four men, one woman, four white men and one Black woman and a Black woman sitting there at the stake. How can you get a fair hearing? You can’t.” 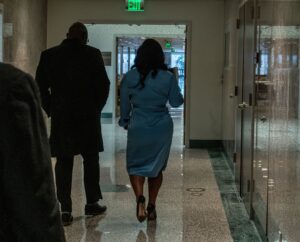 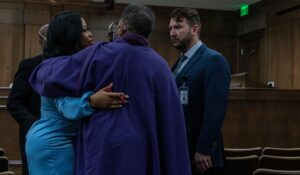 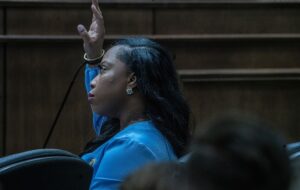 Lt. Gov. McNally, though, made a statement afterward calling the hearing “fair and deliberative.” Robinson said she met with McNally last fall and told him once sentencing took place she would do “the right thing by the people of Tennessee,” meaning she would step down. As recently as last week, she said she planned to stay in the Senate until the process is done.

In his statement, McNally pointed out the committee considered her “explicit legal status” as well as moral and ethical failings in the charges that violated the Senate’s code of ethics.

“The removal of a senator under these circumstances is a very serious and historically unprecedented step,” McNally said. “This is not something we consider lightly. I continue to hope Sen. Robinson will reflect on the findings of the committee and choose to step down voluntarily in the best interest of the Senate.”

During the hearing, Sen. John Stevens, a Huntingdon Republican, argued that the jury found Robinson guilty of defrauding the government and stealing money from the people, which is “sufficient ground for expulsion.”

“We are in a place of great honor and respect,” he said, contending Robinson violated the code of “moral turpitude” and brought shame to the chamber.

Robinson contended afterward that he didn’t understand the case.

Akbari pointed out the committee should be careful about looking at members’ “past behavior” because it sets a dangerous precedent.

Sen. Brian Kelsey, R-Germantown, faces a five-count indictment for allegedly funneling funds from his state political action committee through two organizations to back his failed 2016 congressional campaign. In the House, Rep. David Byrd, R-Waynesboro, is accused of making sexual advances toward girls basketball players he coached in the late 1980s. He hasn’t denied the incidents.

Nevertheless, Senate Majority Leader Jack Johnson said the committee had enough information to find Robinson violated the code of ethics and to “warrant” taking the matter before the full Senate for a final hearing.

Republican-controlled Senate expels Robinson in historic… by Sam Stockard February 2, 2022
Sen. Katrina Robinson: "This has been going on since the… by Eli Motycka January 31, 2022
Stockard on the Stump: Senate Republicans caught off guard… by Sam Stockard April 8, 2022