Gov. Bill Lee wraps $52.6B budget plan into partisan State of the State

Gov. Bill Lee speaks at his State of the State address on January 31, 2022. Photo: John Partipilo

Gov. Bill Lee, in his fourth State of the State address Monday night, packaged a $52.6 billion spending plan focused on education with a hard-edged, conservative outlook for Tennessee.

“Today, our country faces challenges of a different kind, but I believe now more than ever, Tennessee embodies America at its Best. And in order to ensure that, I am proposing a budget and America at its Best policies that reinforce freedom, innovation, exceptionalism and optimism,” Lee said.

The governor also said he plans to propose legislation enabling parents to know the contents of school library books and curriculum, and help them make sure books are “age -appropriate.” The announcement comes days after a Williamson County Schools committee agreed to remove the book, “Walk Two Moons” by Sharon Creech, from its elementary school curriculum and the McMinn County School Board voted to remove “Maus,” a Pulitzer Prize-winning graphic novel about the Holocaust by Art Spiegelman, from its 8th grade curriculum.

In addition, he will start a civics program with the University of Tennessee and form a partnership with Hillsdale College, an ultra-conservative school that he called “champions of American exceptionalism,” to bolster K-12 civics education.

Using $5.2 billion in “overcollections” over two budget years, the governor plans to bolster K-12 education by $1 billion in fiscal 2023, including $125 million for teacher pay raises. Another $750 million is designed for a new K-12 funding formula going forward,  but in its initial fiscal year will go toward career and technical education and relocating 14 schools from floodplains. Some of those schools are in Waverly, Tenn., where catastrophic flooding in August killed 20 people, heavily damaged an elementary school and brought new focus to the dangers posed by schools built in flood-prone areas. 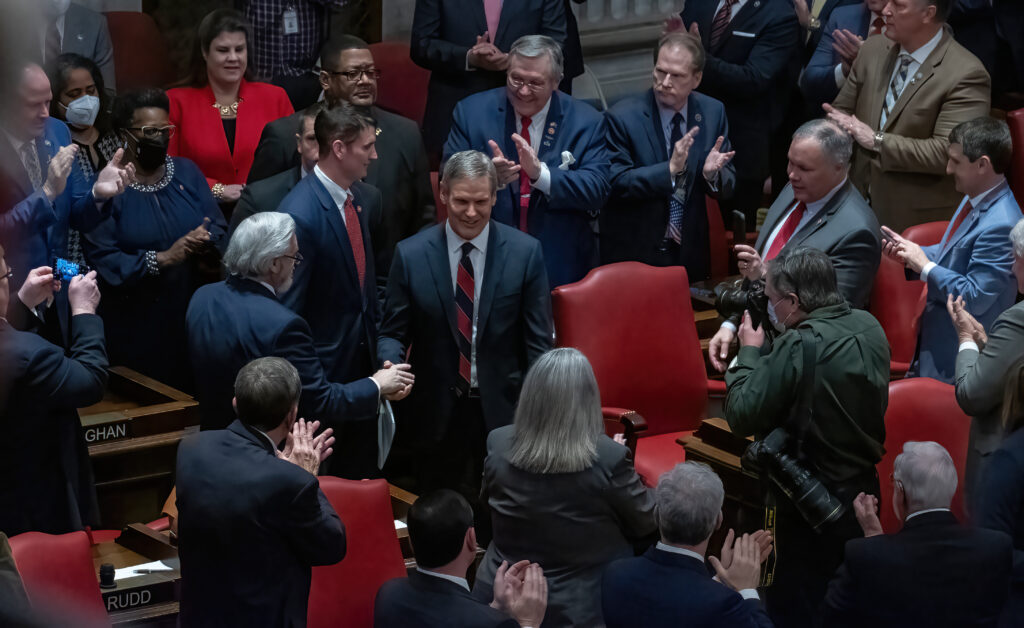 The Lee Administration could not say Monday what percentage increase in pay teachers would receive. Educators point out each year that money placed into the budget often goes to offset insurance premium payments and to pay non-certified personnel, as well as other expenses, meaning it doesn’t reach their paychecks.

Lee will be asking lawmakers this session to approve a funding formula to replace the Basic Education Program, but it is unclear whether they are prepared to pass it. Several key senators have said they want to move slowly. Either way, the funds aren’t targeted for the funding formula in fiscal 2023.

Democrats are skeptical of the education plan, pointing out teachers will receive only a small pay increase once the money trickles down.

“Parents and teachers have heard big talk on education funding in the State of the State before. The question is whether you’re gonna see the actual action and actual dollars, because this budget doesn’t increase the formula for public education this year by anything really,” said Senate Minority Leader Jeff Yarbro of Nashville.

Another $50 million in the spending plan, which increases the state budget by 2.5%, will bump the state rainy day fund to $1.6 billion.

Meanwhile, the governor is embarking on a $3.1 billion program using federal funds enacted under President Joe Biden to shore up Tennessee’s water and sewer systems, expand broadband into remote parts of the state and pay for numerous state projects. The pending state budget doesn’t include that money but has $19.8 billion in federal funds, down slightly from $22.7 billion in the current year’s $51.2 billion budget.

The governor’s plan, which must be approved by the Legislature, includes $1.9 billion for higher education, including $90 million to keep universities from raising tuition. Another $75 million will go toward increasing HOPE Scholarship awards to $5,100, up from $3,600 to $4,500 per student.

Yet another $250 million will benefit Tennessee State University for facility improvements. A study of land-grant funding withheld from TSU over several decades revealed the historically black university needs more than $420 million for deferred maintenance. A bipartisan committee report last April found the institution could be owed more than $544 million.

In addition, the governor is putting $200 million in the budget plan to equip about 10 colleges of applied technology, $72 million for University of Tennessee/Oak Ridge and $50 million for research funding at the University of Memphis.

Despite emphasizing education, Lee inserted a bit of partisanship into his speech, taking a shot at Biden’s 2021 proposal to require workplace vaccinations for large companies.

“In recent history, big government has attempted to take over society instead of contributing to it. That’s no way to live, and Tennessee has pushed back on that big government. In fact, Tennessee has recently been ranked as one of the top five freest states in the country,” Lee said.

The governor signed legislation that came out of an October 2021 special session of the General Assembly, but the central part of it was watered down after Ford Motor Co. officials balked at the main bill, a measure that would have prohibited companies from requiring masks and vaccinations. Ford received a $900 million incentive package from the Lee Administration to build Blue Oval City, a $5.6 billion Ford electric truck and battery plant at the Memphis Regional Megasite in Haywood County where some 5,800 workers are to be employed by 2025.

Part of the governor’s incentive plan for Ford is to build a Tennessee College of Applied Technology at the facility to train plant workers.

House Democratic Caucus Chairman Vincent Dixie of Nashville criticized the governor’s address, pointing out Lee failed to talk about the 22,000 Tennesseans who have died from COVID-19 in the past two years. He called Lee’s State of the State “nothing but a locker room pep speech.”

Dixie also questioned the governor’s slogan, “America at its Best,” saying, “For who? Who is it best for?” He also said he was “offended” by the governor’s statement that Tennessee is one of the freest states in the nation.

“What really does that mean? Isn’t America free to all of us? Is there a class system we didn’t know about that we just found out about today?” Dixie asked.

The Democratic Caucus chair contends too many Tennesseans are being left behind amid the state’s recovery. He pointed toward efforts by Democrats to increase funding for K-12 education with Tennessee ranking 45th in the country, according to the National Education Association.

The Democratic Caucus Chair contends too many Tennesseans are being left behind amid the state’s recovery. He pointed toward efforts by Democrats to increase funding for K-12 education with Tennessee ranking 45th in the country, according to the National Education Association.

“As a critical care doctor, I was absolutely saddened for my patients that there was not a single expression of sympathy or an expression of grief for the more than 22,000 Tennesseans who died from the COVID pandemic. That was something that struck me,” Martin said.

Dixie and Martin both criticized Lee’s permitless carry legislation, which he signed into law despite opposition from law enforcement officials across the state.

“The policies he has passed, open carry, has seen the violence rise here in Tennessee,” Dixie said.

Sidestepping concerns about the COVID-19 pandemic and omicron variant, Lee instead touched on his efforts to eliminate abortion in the state. He also avoided speaking about the recent shooting death of a man along I-65 in Nashville by law enforcement, captured on video, that some have likened to a firing squad.

“My office has proposed and supported some of the soundest pro-life legislation in the country. Thanks to our partners in the Legislature, we passed thoughtful laws that protected the unborn and supported expecting mothers. If the federal courts return full authority to the states, Tennessee’s laws will automatically provide the maximum possible protection and offer a glimmer of redemption as America reconciles our troubled past. I believe Tennessee can be a major part of that reconciliation by offering both hope and resources to families in crisis,” he said.

Tennessee’s “heartbeat bill,” which outlaws abortions once a fetal heartbeat is detected, has been put on hold by the courts.

The governor also chastised the federal government for increasing national debt, which jumped to $28.43 trillion after spiking in 2020.

“This is a bipartisan problem working within a broken system, but states with balanced budgets offer a guide to what could be if Washington would just act. While Washington saddles our kids with trillions of dollars of debt, Tennessee’s strong fiscal position allows us to instead invest on their behalf,” he said.

The governor is proposing to spend $300 million to reduce unfunded liability in the state’s other post-employment benefits program, which includes health insurance for retired teachers and other state employees and local government workers. Another $350 million is to go to the Tennessee Consolidated Retirement System, and $221 million is targeted to reduce state debt.

Other items in the governor’s proposed budget include:

Gov. Bill Lee wraps $52.6B budget plan into partisan State of the State