Robinson calls it “racist, discriminatory” and a “procedural lynching”

Sen. Katrina Robinson, flanked by her attorneys, addresses the Tennessee Senate before the body voted along party lines to oust her. (Photo: John Partipilo)

For the first time in history, the Senate expelled a member, voting Wednesday to oust Democratic Sen. Katrina Robinson of Memphis for violating ethics rules based on two felony convictions and a pretrial diversion agreement.

In a Senate chamber hearing, senators voted 27-5 along party lines to expel Robinson for violating its ethics code despite her pleas to wait until after a March 3 sentencing hearing. Republicans hold a supermajority in the chamber.

At one point in making her case, Robinson called the hearing a “procedural lynching,” drawing cries of support from the gallery where Black lawmakers and friends stood.

Outside the Senate chamber afterward, Robinson said, “It’s sexist, it’s racist, it’s discriminatory. The vote of the majority party today is to further disenfranchise the voices of my constituents you see behind me, people who look like me.”

She argued that other senators should have been disciplined, as well, for their legal and moral failings.

At the hearing’s outset, senators heard the basis for Robinson’s expulsion, a conviction on two counts of wire fraud in connection with expenses federal prosecutors said she illegally took from her nursing school, The HealthCare Institute in Memphis. The U.S. Attorney’s Office charged Robinson with 48 counts of embezzling more than $600,000 from her school between 2016 and 2018. She received federal grants of $2.2 million, which was to be used to run the school, but federal prosecutors claim she spent the money illegally, using it for a lavish lifestyle, including her wedding and then a divorce. But those were culled to only two guilty verdicts of wire fraud totalling less than $3,500, which were upheld by the U.S. District Court Judge Sheryl Lipman. Robinson still questions those counts.

The judge, however, denied her request for a retrial and refused to drop the two remaining charges and set sentencing for March 3.

That decision set in motion action by the Republican-controlled Senate to expel her for violating its ethics code. Convicted felons are not allowed to serve in the Senate. 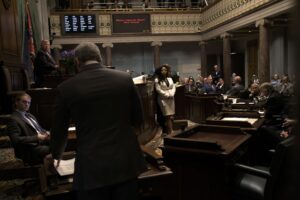 A white suit in sea of dark suits: Robinson faces colleagues. On a partisan divide of 27-5, the Senate voted to expel her. (Photo: John Partipilo) 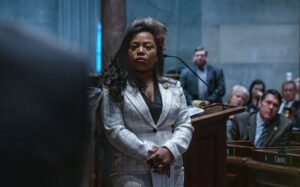 Sen. Katrina Robinson, D-Memphis, asked for 30 days to settle her case. A motion to postpone expulsion was shot down. (Photo: John Partipilo) 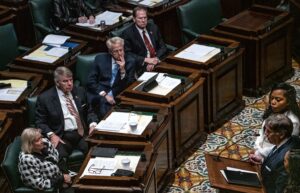 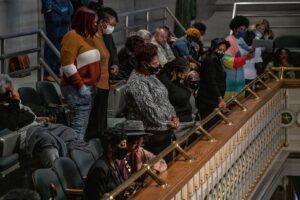 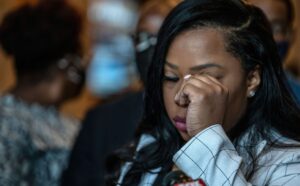 Robinson, who noted she hasn't publicly cried since charges were first filed against her two years ago, teared up in the Senate. (Photo: John Partipilo) 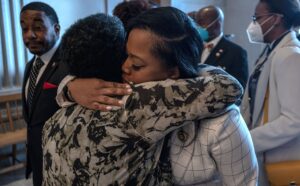 The Senate expulsion vote also was based on a pretrial diversion agreement she reached in December 2021 with federal prosecutors on a charge that she and two co-conspirators bilked a nursing school student out of more than $14,000.

Lt. Gov. Randy McNally issued a statement afterward saying the expulsion was a “necessary action” although none of the members wanted it to happen.

“The integrity of the Senate is of paramount importance. Sen. Robinson was given every consideration and due process. The Senate could have acted immediately following her conviction,” he said.

The Senate gave her time to “reflect and resign,” but she refused, which made the expulsion “inevitable,” he said.

“A sad day for the Senate,” McNally added.

Robinson’s attorneys urged the Senate to wait until after her March 3 sentencing, saying they might be filing motions to have the two convictions dropped, though they wouldn’t confirm more motions are to be made. If the judge hearing the case refuses and confirms the felony convictions, Robinson would resign, her attorneys said.

Her counsel also argued that the remaining counts against her are questionable.

“The harm is significant,” said Robinson’s attorney, Janika White, arguing premature expulsion could cause irreparable damage to her client.

Despite those pleas, Republican Sen. John Stevens of Huntingdon argued that the Senate didn’t rush to judgment, instead waiting until the judge opted against dropping the final two counts and declined to hold a new trial. The Senate could move ahead in a “fair” manner, based on the convictions, he said.

“What are we to do?” Stevens said. “A jury of Tennesseans has found her guilty of felonies. Should we wait until a judge confirms it and her ability to vote is removed and becomes a final judgment? That’s the request.”

Stevens contended the Senate is bound by its rules, not those laws, and had to act “without prejudice and without partiality.”

The Senate is not a court of law, and questions were raised about whether Robinson should even be allowed to have her attorneys present to speak.

Stevens pointed out a jury, not the Senate, determined that Robinson committed wire fraud. In addition, she violated the Senate’s “moral turpitude” guidelines by entering the pretrial diversion agreement, he said.

In the 226 years that this body has existed, it has never taken the action that the ethics committee is asking us to take today, not once.

Robinson’s attorney, Lawrence Laurenzi, told senators the agreement is not an admission of guilt and that no crime was committed. In fact, the government didn’t bring the case to trial because the facts were “problematic,” he said.

White added that an order of dismissal exists, and that Robinson is eligible for expungement in the case.

Robinson’s supporters in the Senate contended a move to expel her would ignore the wishes of 33rd Senate District voters in Memphis.

Sen. Raumesh Akbari, a Memphis Democrat, implored the Senate to postpone the hearing until after she is sentenced because of the chance the final charges could be dropped.

Otherwise, Akbari said, “We as a body will have removed a member based on something that was not final and not true. I don’t want to see a judgment right not when the judge has not signed off on the final conviction.”

“In the 226 years that this body has existed, it has never taken the action that the ethics committee is asking us to take today, not once,” he said.

With much of an Ethics Committee report based on the criminal complaint against Robinson, Yarbro contended the Senate should wait until the final judgment. At that point, she could lose her eligibility to serve, he said.

Yarbro called for a vote to postpone the hearing until March 7, five days after her sentencing.

In an odd twist, senators voted 16-16, apparently because some of its members were confused about the vote. Some thought they were voting on a motion to vote on Yarbro’s request.

If Democratic Sen. Brenda Gilmore had been present, instead of being out sick, the chamber might have put off the hearing.

In her final statement, Robinson argued that Republican senators were prepared to expel her before the hearing began.

She contended that four others should have been up for expulsion as well: Sen. Joey Hensley of Hohenwald, whose medical license was revoked after he admitted to prescribing opioids to his assistant and having an affair with the woman, who was also his cousin; Sen. Brian Kelsey of Germantown, who faces five counts of violating federal campaign finance law for allegedly funneling state funds through nonprofit organizations to promote his failed 2016 congressional campaign; Sen. Stevens, who dealt with questions about his campaign finance reports; and former Sen. Steve Dickerson of Nashville who reached a settlement with the federal government after being accused of participating in a $6 million Medicare fraud scheme.

Biden’s State of the Union address by States Newsroom March 1, 2022
Stockard on the Stump: Lee partners with Michigan college… by Sam Stockard February 4, 2022
Sen. Katrina Robinson: "This has been going on since the… by Eli Motycka January 31, 2022