Metro Nashville official Fabian Bedne loves officiating weddings, so much that he wondered if it was possible to organize a free wedding on Valentine’s Day for the Latino community.

The former two-term Metro Councilmember talked to Veronica Salcedo, founder of the Spanish-speaking news outlet Nashville Noticias, about his idea and she began making calls to Latino business leaders across the city, who willingly donated their services.

On social media, Salcedo asked the public to submit their names to win a free wedding, and within 24 hours, 700 people commented.

Two days later Nashville Noticias picked out a winner, who turned down the prize because he had recently broken up with his girlfriend.

After another winner was picked, Salcedo made a call to Sonia Martinez Miranda, who’s long-term boyfriend burst out in tears when he heard the news. 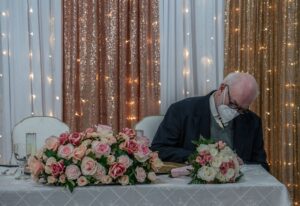 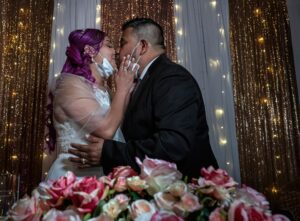 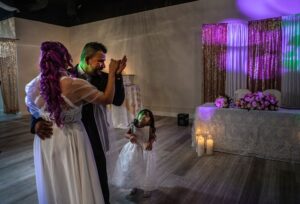 The newlywed couple shares a dance as one of their daughters joins them. Photo: John Partipilo) 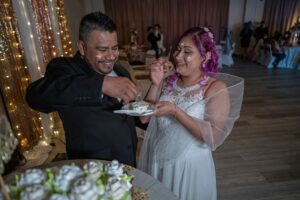 Sampling cake - and getting a little silly. (Photo: John Partipilo) 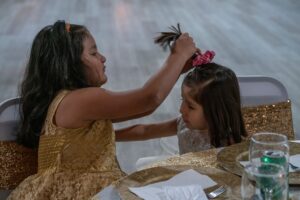 “They couldn’t believe it. They had wanted to get married for years,” said Salcedo.

“You can tell he really loves her,” she added.

On Valentine’s Day, a limo arrived carrying the couple and several of their children to a salon filled with friends and loved ones, all adorned with facial protections.

Everything, from the white, lacy dress to the photographer, had been donated by local Latino businesses for the Martinez family, who shared their wedding with viewers on Nashville Noticias.

“It was my dream to get married and now they helped this become a reality,” said the bride.

As Bedne pronounced them man and wife, their toddler sat on her father’s lap and watched her parents say “I do”, the moment her parents were officially married on Valentine’s Day.