Ukrainians in Tennessee worry for safety of family and friends

Ira Tsykovska’s iPhone kept alerting her with the familiar Apple text tone ring every few minutes while her husband Bogdan Chornomaz looked over her shoulder and worriedly read texts from their families and friends in Kyiv and Kharkiv, two of the largest cities in Ukraine.

“The Russians have surrounded the cities but we are fighting them”, said one of the texts. Tsykovska sighed. “I can only hope that our families and friends are staying safe. I am so worried.”

The couple have not been sleeping well during the last few days. “We have lost track of time because there is an 8-hour difference from Nashville. We don’t know what is going to happen and we fear what the Russians will do to our country,” Tsykovska said.

The Ukrainian couple has lived in Nashville for two years and share a house with several roommates while Chornomaz finishes his Ph.D. in mathematics at Vanderbilt University.

Their cat Hermes, a playful Canadian Sphinx who came with them from Ukraine, briefly takes their minds off the crisis but that only lasts for a few brief moments as more news comes in by text.

The couple said they didn’t vote for President Volodymyr Zelenskyy but now admire his leadership and how he is inspiring the Ukrainians to fight the Russians. 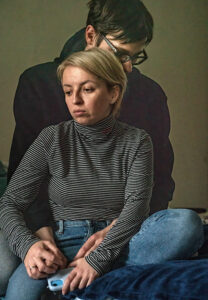 Ira Tsykovska and her husband Bogdan Chornomaz, natives of the Ukraine, at their Nashville home. (Photo: John Partipilo) 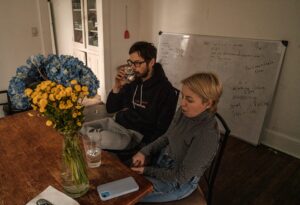 Chornomaz and Tsykovska with flowers in the colors of the Ukrainian flag, sent to them by their landlord. (Photo: John Partipilo) 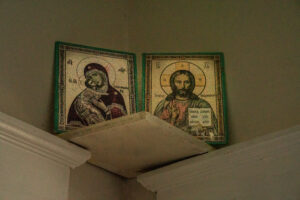 Ukrainian icons of Mary and Jesus watch over the household. (Photo: John Partipilo) 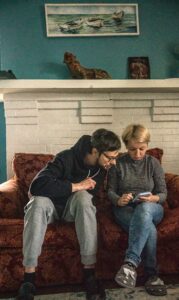 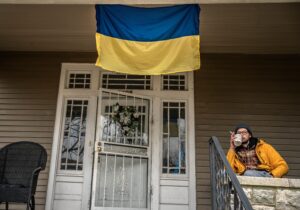 Chornomaz smokes on the porch of his East Nashville home in an effort to ease his nerves. (Photo: John Partipilo) 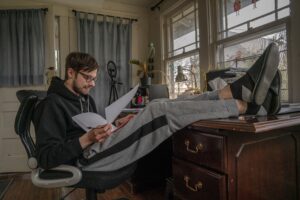 They retire to their kitchen to have some coffee where an arrangement of blue and yellow flowers, the colors of the Ukrainian flag, adorn the table.

The flowers were a gift from their landlord. American friends are giving them kindness and encouragement.

But watching the concern in their eyes tells a story that words cannot describe.

Tsykovska stays inside glued to the phone while Chornomaz goes to the front porch to smoke a cigarette and to keep his mind off the crisis for a brief moment. A Ukrainian flag proudly displayed blows in the wind on the front porch.

“All we can do now is hope,” said Chornomaz .

In her arms she carried her 3-year-old son and left behind her parents, not knowing if she’d ever see them again. But she never regretted her decision to leave.

As a Ukrainian Jew, Lubin faced heavy discrimination in her home country under Soviet Russia rule.

Born and raised in the Ukraine, Lubin said she was denied many amenities based on her background and likened her experiences to Black communities in the U.S. before the Civil Rights movement.

“They called you dirty Jews,” she said. “I personally experienced what it’s like not being blue-eyed, blonde, having dark hair, dark eyes, and darker skin.”

When her first son was born, Lubin knew that he would be unable to attend most colleges due to discrimination and decided to leave with her child and ex-husband.

“Being Jewish, I couldn’t give my children life there,” she said.

Lubin settled in Memphis and raised her children among the city’s Jewish community.

Forty years went by. In 2019, Lubin and her family visited Kyiv, the capital, for five days and was astounded at how much the country had changed since she left.

Ukraine’s fraught history with Russia goes back hundreds of years. The Great Famine of 1932 was precipitated by the policies of Soviet leader Joseph Stalin and resulted in the deaths of an estimated 4 million Ukrainians.

One of the worst massacres of World War II took place near Kyiv, when Nazi-soldiers killed millions of Jews. An estimated 1.5 million Ukrainian Jews died and thousands of others were forced to leave their homes.

The relationship between Ukraine and Russia remained turbulent in the next few decades, as Russia has opposed Ukraine joining NATO.

When Lubin visited Kyiv for the first time in decades, she found a city different from her childhood.

“The county was booming, it was wonderful. It was an absolutely amazing experience. Everybody was welcome regardless of color and religious affiliation,” she said.

Most people stayed because I feel like it’s bringing them together. They’re unarmed and trying to stop this themselves

Lubin has first cousins and friends still living in Ukraine. She hasn’t heard back recently from her high school friends living in Kyiv.

She fears for her friends but also fears that a Russian government will destabilize Ukraine’s Jewish populations.

“I just don’t know how to help them,” she said.

Lubin is one of many Tennessee residents with family living in the Ukraine.

Last Friday, Ukrainian Tennesseans organized a rally at the Tennessee State Capitol in support of worldwide resistance to Russia.

Elsewhere, Cumberland University student Lina Young has slept very little while trying to keep in contact with her family. Although she was adopted from Ukraine, she has kept in touch with her biological father, grandparents and friends.

As of Monday afternoon, she had not heard from her family, who last reported hearing bombings.

“This is real, this is happening and the whole world should be supporting them,” said Young, who’s a junior studying psychology.

Although separating reports from propaganda is difficult, Young receives videos from her friends of their families confronting Russian tanks and soldiers despite reports of civilians dying.

She tries to keep up with reports as much as possible so she can warn her grandmother if the war is headed her way.

“Most people stayed because I feel like it’s bringing them together. They’re unarmed and trying to stop this themselves,” she added.

“Dictators like Putin have a short-term advantage, particularly in their own back yard. But his naked aggression will not be rewarded because the rest of the world sees Putin as he is – the new Stalin. NATO and our allies must sanction Putin until he bleeds. President Biden has done a good job of rallying the free world against Putin. Dictators never succeed for long. We must do all we can to hasten Putin’s fall,” U.S. Rep. Jim Cooper tweeted.

In Memphis, the Jewish community has made efforts to connect with their affiliates in Ukraine to provide relief.

Although the organizations are based on Jewish causes, all citizens will benefit as partners work to provide humanitarian aid to Ukrainians.

While Lubin has yet to hear from her family in Ukraine, she hopes to find some way to help, noting that Russians are mandated to serve in the military at 18 years old.

“Those boys are trained to kill,” she said.

Ukrainians in Tennessee worry for safety of family and friends

Biden’s State of the Union address by States Newsroom March 1, 2022
Zelenskyy reminds Congress of Pearl Harbor and 9/11 in… by Jennifer Shutt March 16, 2022
Glen Casada: The rise and fall of a House Speaker by Sam Stockard January 10, 2022