Thousands of years ago, Native Americans, wild animals and later,early white settlers traveled along the Natchez Trace, on what is now Vaughn Road in Williamson County.

Around the corner lies Sneed Road, where Native Americans once settled alongside the Harpeth River, building their villages and homes on higher plains to avoid flooding, and burying their dead in stone-lined graves among their towns.

Today, Sneed Road is home to mansions and a property belonging to the late Alice Hooker, a well known civic figure in the Nashville area. Before she died in 2019,  Hooker placed the property–189 acres of tree-lined hillside along the Harpeth river–in a restrictive covenant to discourage high-density development.

A year later, her children, including Lisa Hooker Campbell, removed the covenant and submitted an application to the Williamson County Planning Commission to develop the  property into 128 residential lots. That decision has attracted controversy among conservation groups who criticize the family for reversing Hooker’s efforts to preserve the historical area.

“I thank Lisa Hooker Campbell for forcing me to find things that were going to help me push back on these one-acre monster mansions, in what I knew in my heart was Natchez Trace,” said Laura Turner, a spokesperson for Citizens for Old Natchez Trace.

Turner also accused the Hooker children of using the pandemic “to covertly cover some nationally recognized historic land with intense residential density,” in a letter to the editor for the Williamson Herald.

But an attorney representing Campbell denied the accusations. James Weaver, an attorney with Waller Law, said Campbell was an executor of her mother’s will and was obligated by law to generate the highest value for her mother’s property for the beneficiaries: The Hooker children and grandchildren.

“And that’s in the will of the nice lady that everyone says is spinning in her grave,” said Weaver. “It is mean, unfair and just plain common for people to accuse the executor of doing things that are against her mother’s wishes. They simply don’t know what they’re talking about and I hope that they never have to experience people saying that in the media about their relationship with their mother.” 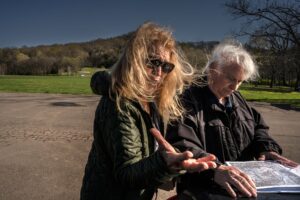 Laura Turner, left, with Nick Fielder, said the dispute has forced her "to find things that were going to help me push back on these one-acre monster mansions." (Photo: John Partipilo) 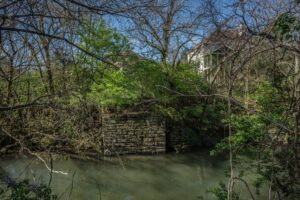 The stone remains of a Civil War era bridge that crossed the Warpath contrasts with million-dollar homes. (Photo: John Partipilo) 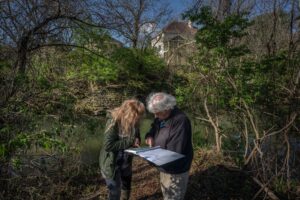 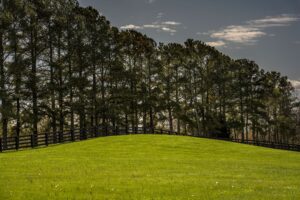 In March 2020, the Williamson County Commission approved new zoning regulations in an effort to prevent high-density growth in parts of Williamson County that lack infrastructure to support a growing population.

After the new zoning plan was adopted, the Hooker children moved to undo the restrictive covenant, which required all three children to sign.

By July 2020, the restrictive covenant was removed, and Campbell then submitted a development proposal to the planning commission in August to build 128 residential lots on 189 acres of hillside and floodplain along the Harpeth River.

Despite submitting the application months after the new zoning laws were adopted, Campbell requested that her proposal fall under the county’s old zoning laws, which allowed for more residential development.

After learning of the proposal, the Harpeth Conservancy Board President Dorie Bolze wrote a letter to the planning commission in December 2020 and urged the commission to deny the Hooker proposal, arguing that the developers failed to conduct sufficient studies on how development would affect the county’s waterways and that the application’s late submission made it ineligible under the new zoning laws.

“The applicant was fully aware the application was incomplete and chose to defer from the November (planning commission) meeting. The applicant’s inability to meet the known tight timeline to secure a complete application before the new zoning ordinance went into effect on November ninth is not something the planning commission needs to accommodate nor can it approve,” wrote Bolze.

The planning commission approved Campbell’s proposal for a smaller subdivision but denied the application for the much larger property on Sneed Road, leading Campbell to file a lawsuit challenging the commission’s decision.

It is mean, unfair and just plain common for people to accuse the executor of doing things that are against her mother’s wishes. They simply don’t know what they’re talking about and I hope that they never have to experience people saying that in the media about their relationship with their mother.

According to the Williamson County planning director, Mike Matteson, the commission cannot comment on the pending litigation but has yet to receive another application from Campbell. If the Hooker property were to be offered again for development, the county would consider its historical and archeological features.

Since then, conservationist groups have sought to have the land permanently preserved.  In February 2022, Citizens for Old Natchez Trace received an environmental study of the land surrounding the Hooker property, finding that the land is home to archaeological remnants and wildlife supported by the Harpeth river, including a bald eagle.

Archeologists have long known there were still indegenous artifacts in the area since 1878, when archeologists with Harvard’s Peabody Museum opened a total of 197 graves. Then in 1979, when homes were first being built, construction crews uncovered additional stone-box graves and were forced to stop construction until the state could investigate. In the following decades, development often led to crews disturbing human remains, and each time, property owners relocated the remains or paved over them, in accordance with state law.

Today, million-dollar homes sit upon where these villages once stood, with no markers to indicate Native Americans were once there. Only the Harpeth River remains and a mound– an ancient remnant of the village– sits across the street, overlooking the homes along the river.

The group, along with indegenous-rights group Justice for All Tribes, argue that development could endanger the wildlife living among the Harpeth river and destroy archaeological remnants of the Native Americans that once inhabited the area.

“The fact that the mother wanted to preserve this and the kids didn’t is another part of this story,” said Nick Fielder, former state archeologist. “People like money better than scenic preservation.”

Although the Hooker property is not listed in state records, Fielder has reason to believe the area has undiscovered artifacts.

According to Weaver, surveyors have searched the land and found no evidence of archeological artifacts.

“There are no prehistoric, cultural resources on the Hooker farm, according to our consultants, and the relevant regulatory agencies,“ he said.

And opposing sides have argued about Hooker’s motive in placing the priceless land into a restrictive covenant.

As a conservationist, Hooker received the Land Conservation award for Williamson County for her numerous contributions and spent much of her  life contributing to some of Middle Tennessee’s most notable charitable organizations, including the Nashville Symphony, United Way, Cheekwood, the Iroquois Steeplechase and the Harpeth Conservancy.

Campbell formerly served as a member of the Harpeth Conservancy before stepping down, and filed suit in 2007 alongside her mother against developers for alleged damages to the property’s waterways.

But Hooker made no public comment about whether she wanted the property preserved, and her restrictive covenant conflicted with a deed naming her daughter the executor of the estate, a deed that Campbell is legally obligated to uphold, according to Weaver.

Although he has no knowledge of the restrictive covenant, the land isn’t in one now, he said.

Turner argued that Hooker’s known record of conservatism proved that the land should remain free from development.

“Alice Hooker, who was very well known in the  land-conservation circuit in Williamson County, when they bought this land decades ago . . . she obviously hoped her children wouldn’t develop it,” she said.

The only known inhabitant is a bald eagle that has been sighted somewhere among the plains of the Hooker farm.

Biden’s State of the Union address by States Newsroom March 1, 2022
Settled into new homes, refugees in US say they are working… by Dulce Torres Guzman June 20, 2021
Stockard on the Stump: COVID-19 voucher bill draws chilly… by Sam Stockard January 28, 2022