Voters meandered in and out of Cathedral of Praise in north Nashville, many apprised on the issues facing Nashvillians on a local and federal level.

Few people had shown up to vote by noon, said Carmen Dixon, despite her efforts to encourage more young people to vote. She noted that a lot of people voted early, so today’s federal news that the Supreme Court seeks to overturn Roe v. Wade may not have been enough to influence people’s decision to turn out.

Erin Coleman, candidate for Division VIII judge in Davidson County, had received texts that morning from friends who had woken up to the news and rushed to the polls.

“It’s kind of the first proactive thing they can do to try in some way to rectify what’s about to happen,” said Coleman.

“They’re like, ‘Oh my gosh, the leak. I wasn’t going to vote in a local election but now I realize how important it is,’” said Coleman.

Rebecca Hood had already planned to vote on Tuesday but was alarmed by the news.

“These decisions that are so big, like women’s rights being overturned, and I think that a lot of things going on in the world just kind of brushed that under the rug, and some people of my age were more interested in the Met Gala (fundraising event for Metropolitan Museum of Art in New York) last night than actually seeing the decision that was made. So it just makes it even more important that I use my voice,” said Hood.

“Our rights are being taken from us,” she added.

As the noon sun raised temperatures, more voters filed through the crowds of candidates and their supporters, young and old, encouraging community members to get involved in local elections.

Poll watcher Matt Haskell planned to spend the day visiting several polling stations to ensure everyone is “doing the right thing” and noted that more people need to vote.

At midday, voting was slow in other parts of the state, as Tennesseans went to the polls to select primary candidates for county commissions, judicial seats, county mayors and in some cases school boards. 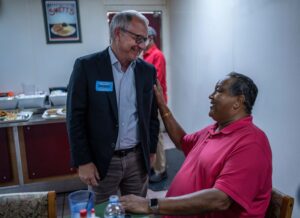 Former Nashville Mayor David Bailey, who is running for a judicial position, stopped by Swett's Restaurant for lunch and a chat with David Swett between visits to polls on Tuesday. (Photo: John Partipilo) 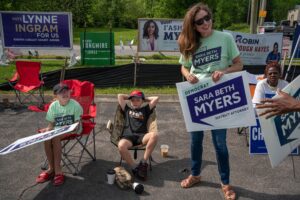 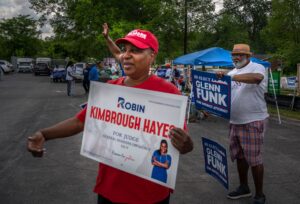 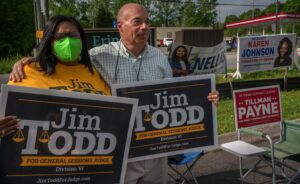 In Hamilton County, Ryan Jenkins, a volunteer for Hamilton County Commission Chair Sabrina Smedley, who is running for county mayor, said he was feeling hopeful about his candidate’s chances.

“With low turnout like this, anything can happen,” said Jenkins.