The gathering on Saturday was part of a coordinated national effort

An abortion rally in downtown Nashville took protesters on a route to the state Capitol and the federal courthouse. Photo: John Partipilo

On Saturday, thousands of abortion-rights protesters marched through downtown Nashville, part of coordinated national “Bans off our Bodies” organizing effort to hold rallies in support of Roe v. Wade.

A diverse and multigenerational crowd of roughly 500 people met at the Legislative Plaza and listened intently to organizers speaking about a potential future where abortion was no longer legal.

Since a leaked draft opinion by the U.S. Supreme Court showed intentions to overturn Roe v. Wade — the ruling that made legal abortion constitutional in 1973  —  women of color and members of the LGBTQ community have expressed fears that other laws protecting privacy, including the right to marriage equality and access to contraceptives, could be struck down as well should Roe be struck down.

Amy Massey, a protester adorned in a T-shirt from the 2021 Women’s March in Washington D.C., said she and other women had originally marched in 2021 in the wake of the late Supreme Court Justice Ruth Bader Ginsburg’s death and the appointment of Amy Coney Barrett, a conservative, to the Court.

Her attention quickly turned to the organizers as they spoke with their backs turned to a handful of counter protesters.

Among the speakers was Francie Hunt, executive director of Tennessee Advocates for Planned Parenthood, who spoke of her own experiences of needing an abortion following a miscarriage. Hunt, who noted she was adopted,  said her experiences showed the need for women to have a say in medical decisions.

“It’s really hard right now in this moment because the politics that are happening, they can make you feel like you’re being judged, even though you know it was the best decision for your life and your family,” she said. Behind her, anti-abortion protesters called Hunt a murderer.

“You did nothing wrong,” she added.

Several others spoke, including high schoolers and Odessa Kelly, who is running for Congress. 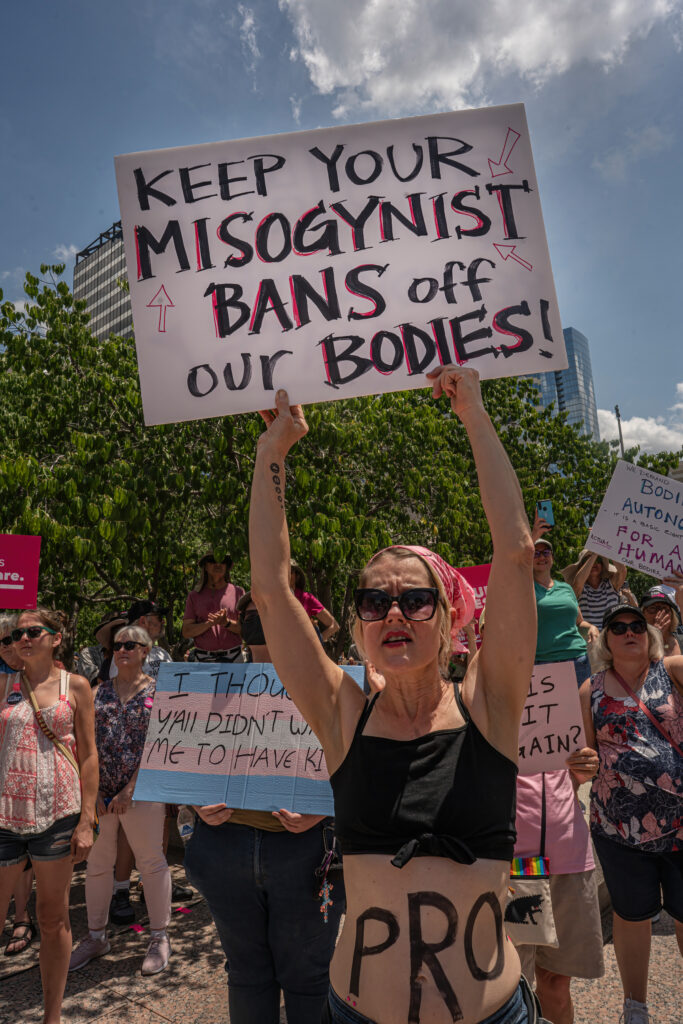 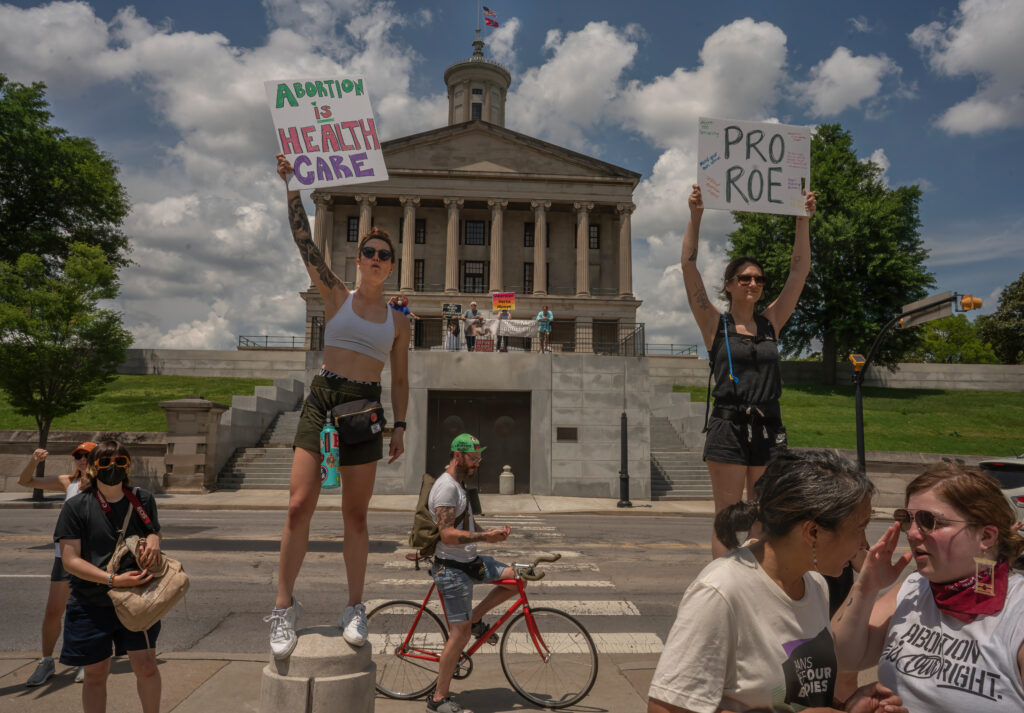 After the speeches,  a row of women carrying a banner spelling “bans off our bodies” led the march to the Fred D. Thompson U.S. Courthouse, where women spoke about their own abortions.

The women stood before the crowd of hundreds. Some spoke of being teenagers with no support, no sex education and inducing abortions on their own. Another spoke of just not being ready for a child at that time in her life. Others said their abortions were necessary to save lives; one had an ectopic pregnancy and another elected to remove one embryo to save a viable one.

Another woman spoke of having marched in 1973 for the right to have a legal abortion in 1982.

“I’m so proud of you younger women and I’m so damn sorry that you have to keep doing this,” she said.

Abortion-rights protesters now marching from the Legislative Plaza to the federal courthouse in Nashville. pic.twitter.com/u3FcvZfTqC

“It was safe for me, it should be safe for you,” said another woman.

As the crowd dispersed, some protesters stayed to confront two men quoting Bible verses to call the protesters “baby killers.”

The rest took to the streets of downtown Nashville, carrying their signs high. 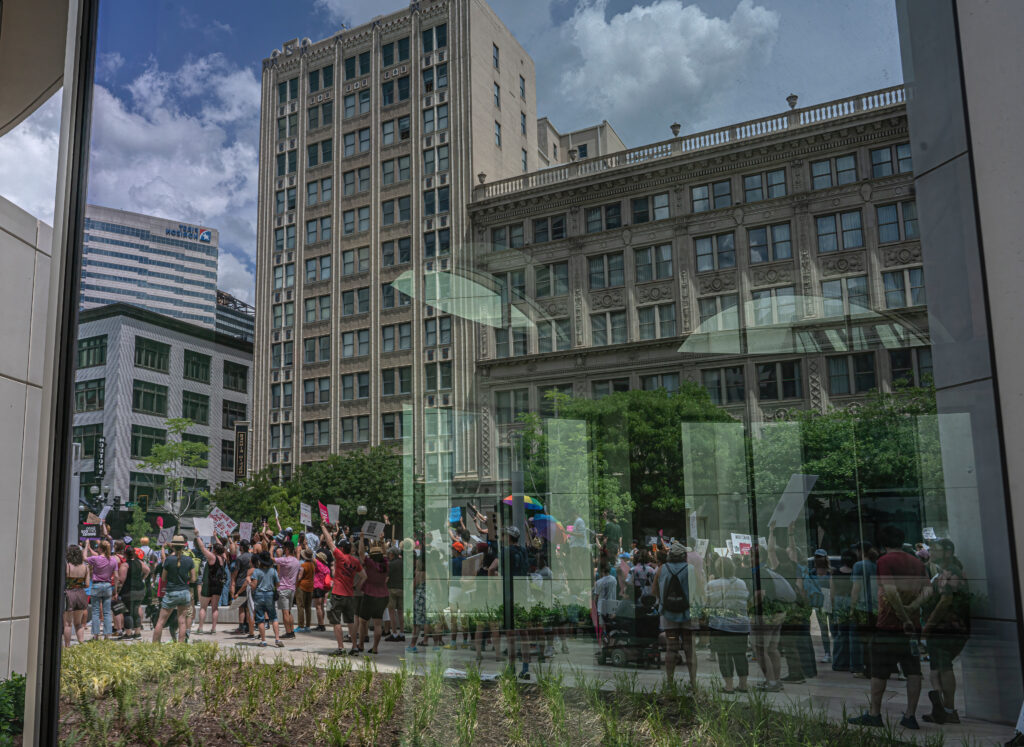 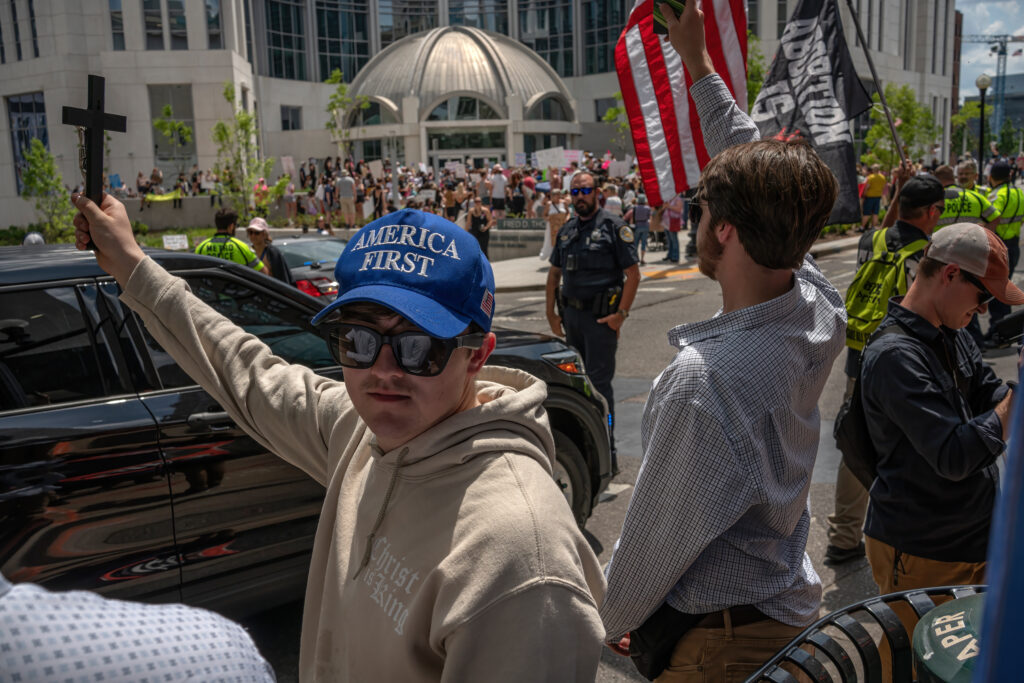 Biden’s State of the Union address by States Newsroom March 1, 2022
Tennessee's anti-LGBTQ bills supported by national… by Abby Lee Hood May 20, 2021
U.S. Senate to try again on abortion rights after bombshell… by Jennifer Shutt May 4, 2022