Dollar General workers and advocates protesting poor working conditions and wages marched to the corporation’s stakeholders meeting in Goodlettsville, only to be met with a locked door.

On Wednesday, labor advocacy groups, community leaders and Dollar General employees from several states—including Louisiana and Mississippi— met to protest the poor conditions many employees say they face while receiving less than livable wages. They were joined by Odessa Kelly, a candidate for U.S. Congress, and the Rev. William Barber, co-chair of the Poor People’s Campaign.

The protesters marched to the stakeholder’s meeting at the Goodlettsville City Hall, only to be met by Dollar General representatives and police officers insisting they stay away from the doors despite being on public property.

Barber then confronted the officials about denying protesters entry into a public building.

“You are a citizen, taxpayers all of you, but most of all we’re human beings, and this property is public. The shareholders get to go in. They’re not letting us in. They don’t own this property,” said Barber.

Barber was allowed to pray in front of the building for five minutes before being given entry  into the building. He was followed by two women—Gabriel Bolden Shaw and Kenya Slaughter—who said they were given permission to act as proxies at the meeting. As they neared the door, Dollar General officials were seen clearing a table in front of the stakeholder’s meeting. They then informed Barber that they had arrived too late to enter the meeting room, and the doors were now locked.

Barber and the group had arrived at 9:04 a.m while the stakeholder meeting started at 9 a.m. The protesters had arrived 30 minutes before the meeting began but were pushed back from the door.

Barber continued to demand entry into the meeting room, knocking loudly on the door.

“They’re making up the rules. I’ve been through this plenty of times. They saw you coming and as soon as they did they started holing up,” he said.

He continued to knock before being confronted by two people identifying themselves as Dollar General officials, who explained that  the meeting was closed due to being live streamed and they were disrupting the meeting.

“Sir, you ought to be ashamed of yourself,” said Barber. 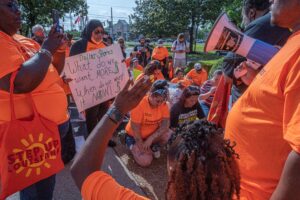 The group prays outside the Dollar General shareholder's meeting on May 25, 2022. (Photo: John Partipilo) 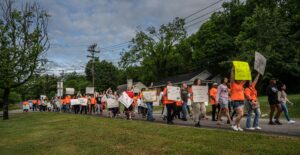 The march to the shareholder's meeting. (Photo: John Partipilo) 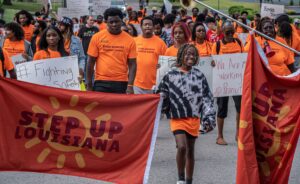 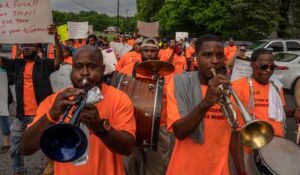 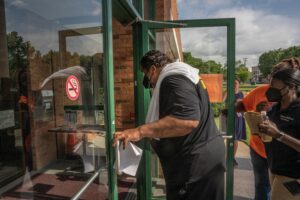 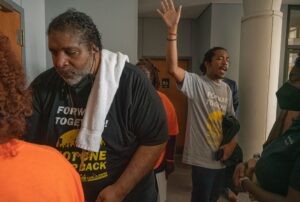 They continued to argue before Barber and the two women relented and left, promised to come back for the next shareholder’s meeting, and reunited with the protesters waiting outside.

“We were not able to speak to them, but guess what, we’ll be back,” said Bolden. “We had the proper documents, we didn’t come in there with guns. We came in there peacefully wanting to speak our piece. We were even prepared for them to try to not let us speak, but at least let us in there and pretend like you don’t hear us.”

“The shareholders gave us the proxy to go inside. We have all the proper documents. There was nothing on these papers that say we couldn’t attend to speak, but they’re scared. They even sent out suits and ties that look like us,” she said, referring to Black representatives of the company.

Over the past few years, Dollar General has faced increasing numbers of complaints from workers-rights advocates and the U.S. Labor Department, alleging that the company’s low-cost business model led them to disregard worker safety and left workers to deal with hazardous conditions.

Since many Dollar General stores are located in low-income areas, workers have complained there is little security to protect them. At least six workers have died during armed robberies from 2016 to 2020, according to CNN.

Dollar General also faced criticism during the initial spread of COVID-19, and the company was accused of being slow to provide workers with protective equipment and hazard pay.

They’re making up the rules. I’ve been through this plenty of times. They saw you coming and as soon as they did they started holing up.

These allegations were backed up by workers. who spoke about conditions they say they often deal with alone.

“While I was assistant manager, every Sunday for an entire year, I was there alone,” said Slaughter, who worked at Dollar General in Louisiana for four years, earning $11.75 and hour.

And despite repeated requests for equipment to protect herself from COVID-19, Slaughter waited two months before the company installed plexiglass in her store.

A spokesperson for Dollar General said in a statement that the shareholder meeting began promptly at 9am, its official start time.  “We are unaware of any individual who sought access to the meeting at or before that time and was denied access.

The statement continued,”It is our understanding that the protesters, based on the permit provided by the city, were provided a designated spot outside the building to peacefully demonstrate.  To the extent they were asked to relocate, that request would have been made by city officials in order to ensure compliance with the permitted conduct.”

“We maintain open lines of communication with our employees and encourage team members to share their thoughts via the many Company-provided channels so that we can work collaboratively to address challenges and celebrate successes. As is our practice, we plan to listen, and are listening, to their feedback.”

Dollar General was founded in 1939 by James Luther Turner and Cal Turner and in 2020 reached 112 on the Fortune 500 annual ranking of the largest companies in the U.S.