More than 70 Tennesseans, including several pastors, walked from Nashville’s Legislative Plaza to Gov. Bill Lee’s office on Wednesday to make a plea for gun reform.

The rally comes in the wake of several high profile mass shootings, including last week’s slaughter of 19 elementary school children and two teachers at Robb Elementary School in Texas and the May 14 killing of 10 Black shoppers at a Tops Friendly Market in Buffalo.

Ingrid McIntyre, pastor of community engagement at Nashville’s Belmont Methodist Church, read the names and ages of the Uvalde and Buffalo victims and Kevin Riggs, pastor of Franklin Community Church, read a letter signed by 49 ministers that asked Lee to consider five gun reform steps, including the repeal of permitless gun carry.


Shaundelle Brooks, the mother of Akilah DaSilva, who was shot and killed in the 2018 mass shooting at a Nashville Waffle House, addressed the crowd.

After another mass shooting, “All the emotions come back,” said Brooks. “Here we go again: The blaming. My heart goes out to the mothers who have lost children.”

She recounted getting the call from an emergency room physician in 2018 telling her that her son was dead. “I’m tired of empty promises . . . thoughts and prayers with no action,” 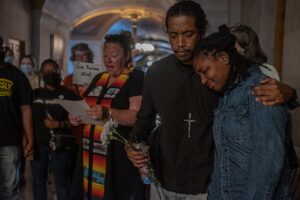 Nashville legislative candidate Justin Jones comforts a friend as Rev. Ingrid McIntyre, behind him in clerical stole, read the names of the victims of the Uvalde and Buffalo shootings. (Photo: John Partipilo) 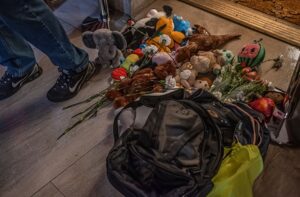 Group members place 19 stuffed toys, one for each child killed in the May 24 school shooting in Uvalde, Texas. Gov. Bill Lee's staff was filmed putting the toys in the trash after the event. (Photo: John Partipilo) 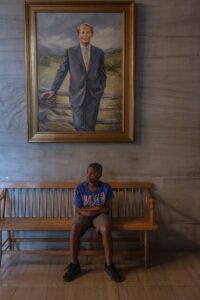 Elijah Oliver, sitting beneath a portrait of former Gov. Lamar Alexander, attended the event with his mother. He said he wants to be a Major League Baseball player when he grows up. (Photo: John Partipilo) 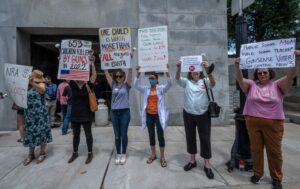 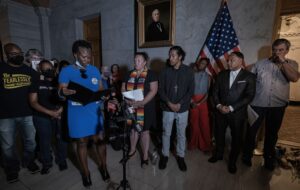 Shaundelle Brooks, in blue dress, talks about the moment she learned her son, Akilah DaSilva, had been shot and killed in a 2018 mass shooting in a Nashville Waffle House. To her right are Rev. Ingrid McIntyre, Justin Jones, Charlene Oliver, who is a candidate for State Senate, Rev. Keith Caldwell and Rev. Kevin Riggs. (Photo: John Partipilo)

Members of the group left 19 stuffed toys outside Lee’s office to represent the 19 Texas children killed and lingered for 90 minutes, the approximate amount of time that elapsed from when the Uvalde shooter entered the school building to when he was killed.

After group members left, Lee’s staff members gathered the toys and threw them in a trash bin.