For more than a decade, Tennessee Democrats have lamented the lack of a “bench” — that is, elected officials at the city and county level who can develop into respectable candidates for U.S. Congress and governor, much as Triple A ball clubs prep talented players for the Show.

The lack of a political bench means the Tennessee Democratic Party has ended up with such luminaries on the ballot as Mark Clayton, who only recently was kicked out of a Registry of Election Finance meeting, but rose to glory when the Washington Post called him “2012’s worst candidate” during his bid to defeat former Sen. Bob Corker.

Clayton beat out the “party favorite” — and I use that term loosely — Park Overall, an East Tennessee actress who told the Post she decided to run when the TNDP chair called her and “caught her drinking.”

With candidates like this, who needed a loyal opposition in Republicans?

But a change might be, ever so slowly, afoot.

And it’s in Memphis, the Bluff City, the bastion of Democratic voting, the state’s largest city and one of only two Democrats can reliably win — the other being Nashville — where a bench appears to be growing.

Let’s start with Shelby County Mayor Lee Harris. Harris has a bachelor’s degree from Atlanta’s Morehouse College and a law degree from Yale. He’s had a fast political ascent, from his 2011 election to Memphis City Council, to his successful defeat of incumbent state Sen. Ophelia Ford in 2014. He became county mayor in 2018 and one of the few knocks heard about him is that he’s climbed too fast and is overly ambitious.

Take, for instance, gubernatorial candidate JB Smiley, Jr. Smiley entered the Democratic gubernatorial primary with an electrifying kick-off video featuring gospel music and focused on platform issues like gun safety and public health —”Too many shots fired, not enough shots given” — the former of which seems prescient given the recent number of mass shootings.

Smiley, who serves on Memphis City Council, is one of three Democratic gubernatorial candidates, including Dr. Jason Martin of Nashville. No one is placing money on the outcome of the primary nor does anyone rational think a Democrat can knock off incumbent Gov. Bill Lee, but Smiley has made a big impression statewide.

Rep. Torrey Harris, running for his second term in the Tennessee House, beat 26-year incumbent John DeBerry in 2020. Harris, who may be the only openly LGBTQ member of the House (Rep. Eddie Mannis, R-Knoxville, is not running for reelection) passed legislation to help foster families and children in his first term.

Then, there are a host of women on the bench. Sen. Raumesh Akbari is thought to have her eye on the 9th District Congressional seat (along with several others) when incumbent Democratic U.S. Rep. Steve Cohen retires. Akbari, a lawyer by trade, has proven to be a rational voice in the state Senate, arguing for — among other pieces of legislation that should be no brainers — a constitutional amendment to outlaw any form of slavery in Tennessee.

Sen. London Lamar was running for her first term as a representative just four years ago and was selected by Shelby County Commission in March to fill the seat vacated when Katrina Robinson was removed from office for a wire fraud conviction. 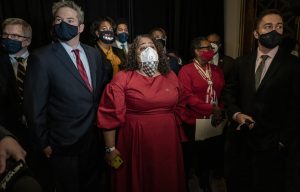 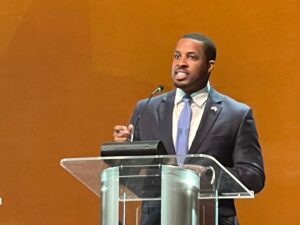 County Commissioner Tami Sawyer has been a vocal and outspoken voice for civil rights during her term. Although she has said she will not run for a second term on the Shelby County Commission, Sawyer is only 40 and one has to think she’s not done with politics.

I could go on. The Shelby County Commission has a few other potential stars and down the road, Madison County has a couple of under-50 elected officials with bases to grow.

The question, though, is if the Tennessee Democratic Party can harness the West Tennessee movement. Despite its solid base, Memphis traditionally gets short political shrift from the rest of the state. Democratic candidates for statewide office pay homage, or should: James Mackler stands as a cautionary tale of what can happen when a candidate does not.

Mackler, the Nashville veteran who was widely viewed as a shoo-in for the Democratic nomination for U.S. Senate in 2020, sat on his money and did little on-the-ground organizing in West Tennessee. Perhaps as a result, he came in third in the primary, with little known Memphis environmental activist Marquita Bradshaw winning despite having raised only $24,000 to Mackler’s $2.1 million.

Finally, the elephant in the room is race. All the candidates I’ve mentioned are Black, in a state that has never had a Black statewide elected official. Only one of Tennessee’s nine congressional districts has had Black representatives, and that’s the 9th, carved out as a majority-minority district and held only by Harold Ford Sr., and son Harold Ford Jr., before Cohen, who is white, was elected in 2006.

So, yes: There’s a Democratic bench in Tennessee. Whether the state party can take those players to the Show or whether they remain in the minor league remains to be seen.