Former President Donald Trump castigated congressional hearings on the Jan. 6 insurrection, calling them a “hoax” despite mounting evidence he acted illegally in trying to overturn the results of the 2020 election.

“It was a simple protest that got out of hand. They never show the size of the crowd. I’m not talking about the small percentage of people who went down to the capitol, many of whom did nothing wrong,” Trump said Friday.

Speaking in Nashville at the Road to Majority Faith & Freedom Forum at Opryland Hotel, Trump belittled the House hearings, continuing his claims that the vote’s outcome was stolen.

“I believe they cheat like hell on elections. People say that’s politically incorrect. I don’t give a damn,” he told a crowd of hundreds of supporters at the event.

Trump continued to make the claim that the election was stolen even though his advisers and cabinet members, including Attorney General William Barr, told him numerous times the results were legitimate.

The 45th president claimed he simply asked then-Vice President Mike Pence to send the electoral votes back to state legislatures to investigate claims of election fraud.

Trump likened the Jan. 6 hearings to claims he colluded with Russia to fix the 2016 election, even as the U.S. House committee investigating the insurrection found this week that conflict between the former president and Pence over certifying the 2020 election results placed the vice president within 40 feet of a mob that would have killed him.

Secret Service agents led Pence to a safe place in the Capitol that day as rioters neared the U.S. Senate chamber, according to the hearings. But Pence refused to leave the Capitol that day, declining to overturn the election and use a list of phony electors to replace those from seven battleground states, testimony showed.

In spite of the overwhelming evidence, Trump referred to the panel as the “disgraceful unselect committee,” calling the members “radical left haters” and saying they’re “spinning a fake and phony narrative.” He claimed to have proof of fraud in the 2020 election but said the panel is refusing to consider it.

Faith and Freedom “Road to Majority” 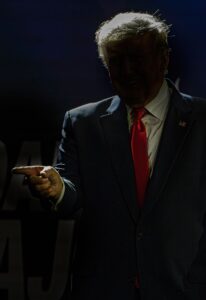 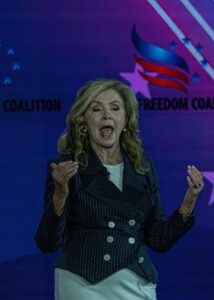 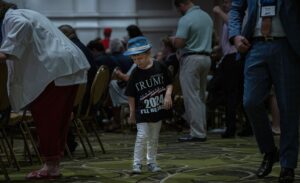 A young attendee of the Faith and Freedom conference. (Photo: John Partipilo) 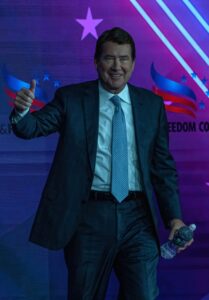 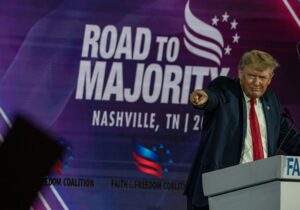 The congressional panel obtained emails from John Eastman, an outside attorney for Trump who came up with a plan in which he wanted Pence to commit a “minor violation” and substitute fake electors who would back Trump for legitimate electors from the states of Arizona, Georgia, Michigan, New Mexico, Nevada, Pennsylvania and Wisconsin.

The committee replayed comments Pence made to the Federalist Society in which he said, “President Trump is wrong” and that he had no right to overturn the election.

When the committee questioned Eastman, he invoked the Fifth Amendment right against self-incrimination 100 times.

Pence reportedly clashed with Trump several times, causing the former president to call him a “wimp,” according to a former White House aide. On Friday, Trump denied calling him that name.

Trump noted Pence said he had no choice but to certify the vote and added that Barr refused to reject the election results because he was afraid of impeachment. The former president said he wasn’t worried about that because he was impeached twice.

He further claimed only one person, Ashli Babbitt, was killed at the Capitol even though several other people died in connection with the riot that was designed to stop the peaceful transition of power.

Trump told supporters it is up to them to change the course of the nation in the coming elections, arguing that Biden has lost international respect, reversed his border policies and caused the nation to lose its energy independence.

While the conference’s speakers noted the importance of taking back the House, Senate and White House during upcoming elections, none of the Republican speakers who took the stage broached the congressional hearings. Most also said they hope Trump will run for the presidency again in two years. He has not made a formal announcement but is believed to be weighing whether to do it before the midterm elections this year.

At the end of his speech, Trump said, “We are going to take back our magnificent White House.” To do so, he will have to face down strong competition from fellow Republicans.

U.S. Sens. Bill Hagerty and Marsha Blackburn, both of Tennessee, voted to certify the 2020 election after the insurrection, despite initially saying they would not support Biden’s election. Neither broached the congressional hearings during their Friday presentations.

Blackburn, a former Tennessee legislator, spent most of her speech accusing the Biden Administration and “the left” of making an “all-out attack” on people’s faith, family, freedom and religious liberties.

Blackburn didn’t specify how religion is under attack but touched on the importance of the Supreme Court’s looming decision on abortion. She also contended that the Biden Administration tried to impose lockdowns and mandates on America during the COVID-19 pandemic, apparently referring to vaccine requirements proposed by private businesses.

In addition to accusing “big tech” of censoring her for saying biological men should not be competing against women in athletics, she touched on the importance of the Title IX in enabling girls and women to compete in sports.

“Now they’re being told to be inclusive and fair, you have to let biological males compete,” she said.

She claimed that trend is destroying hope and added, “What do you expect from people who can’t define the word ‘woman’?”

“They can’t define ‘woman’ because maybe you’re not a biologist,” she said, referring to the response Supreme Court Justice Ketanji Jackson gave during Senate confirmation hearings when Blackburn asked her to define a woman.

Blackburn was lampooned nationally for her line of questioning, including a skit on Saturday Night Live.

Between speakers, the David Bowie song “Rebel” blared in the room replete with the lyrics, “She’s not sure if you’re a boy or a girl.”

For his part, Hagerty told the crowd that Biden has failed on every issue and encouraged hundreds in attendance to return Republicans to the majority in the House and Senate this November.

Former ambassador to Japan and Tennessee commissioner of Economic and Community Development under former Gov. Bill Haslam, Hagerty argued that Biden has damaged the nation’s reputation internationally and “emboldened” adversaries such as Russia and Iran while fighting an “all-out war” against American energy independence, driving up energy prices worldwide. The price of gas and record-setting inflation were constant topics among the slate of political speakers.

“Biden would rather deal with international killers than our own American drillers,” Hagerty said.

Sen. Lindsey Graham was even harder on Biden than Blackburn and Hagerty, alleging a long list of failings, including failure to control the southern border, to stand up to China and being soft on Russia.

“Russia is doing things they would never do on Trump’s watch,” Graham said.

The Biden Administration has pushed billions of dollars in funding for military aid to Ukraine through Congress but has declined to send troops into the region.

U.S. Sen. Rick Scott of Florida harped on “wokeism” and “elitism,” saying he would have all school children say the pledge of allegiance and to stand for the national anthem and “learn this is the greatest country in the world.”

Scott, who recently dropped a proposal to tax low-income Americans, said the United States should end its economic relationship with Communist China and stop buying its product because “they want to destroy us.”

Another part of his plan is to build a wall at the southern border. “And when we do, we’re going to name it after President Donald J. Trump,” he said to a roar of approval.

U.S. Rep. Jim Jordan, ranking member of the House Judiciary Committee,  jumped on the Biden Administration for allegedly treating parents as “terrorists” at the request of the National School Boards Association.

He appeared to be referring to steps taken after groups threatened school board members and parents, including incidents in Williamson County over curriculum and books.

“The left now controls the Democrat Party,” Jordan said, and those in control “don’t like the country.” He argued, “Maybe that’s why they weaponize the government against us.”

A year after Jan. 6, attack on the U.S. Capitol lives on in… by Jacob Fischler March 5, 2022
Stockard on the Stump: Registry members ticked about Casada… by Sam Stockard March 4, 2022
Biden in Jan. 6 speech decries ‘web of lies’ created by… by Ariana Figueroa January 6, 2022