One January day in rural Hickman County, drivers on Highway 7 noticed an inconspicuous sign posted on a bridge crossing Lick Creek, a pristine waterway used for recreation and farming.

Few dared to stop and read, since the bridge obscured the view of incoming traffic, until one curious local hiked to the sign, took a picture and shared it with his neighbors. Written on the sign was a public notice from the Water Authority of Dickson County (WADC), announcing intentions to build a facility to discharge wastewater into Lick Creek.

A group of residents did a little legwork and learned from the Tennessee Department of Environment and Conservation that 97% of the water treated would come from Williamson and Dickson Counties, two counties that are exponentially wealthier and more heavily populated than Hickman County.

The small sign along a busy bridge had been the only notice residents had received that Lick Creek, from which many get the water for their crops, could soon be filled with treated wastewater from counties with greater infrastructure than Hickman.

Some residents still depend on Lick Creek for drinking water drawn from wells fed by the waterway.

“This creek means something to us on a level that is very difficult to explain, but for the most part, we all knew what we were signing up for when we moved down here, in the country, living this rural. I knew it was going to take me 20 minutes to get to a grocery store and I’m okay with that,” said Karen Fox, a Hickman County resident and spokesperson for Save Lick Creek.

“I feel really blessed by where we live and I don’t think it should be turned into a dumping ground for other wealthier communities,” she added. 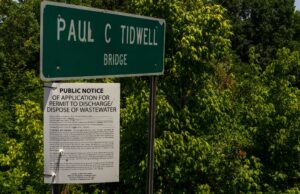 A public notice from the Water Authority of Dickson County. (Photo: John Partipilo) 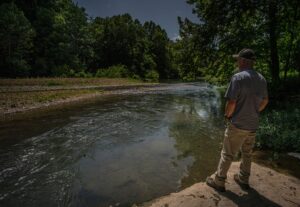 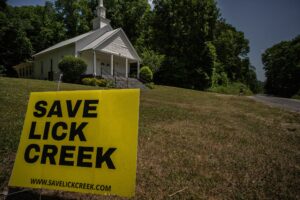 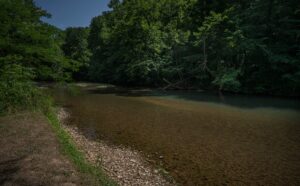 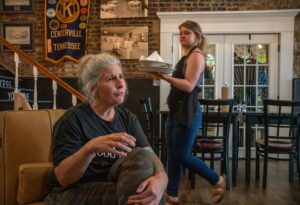 Concetta West, who owns a Centerville ice cream shop, talks about the importance of Lick Creek to the community. (Photo: John Partipilo)

Over the past two decades, Williamson and Dickson Counties have experienced considerable growth, leading to an increasing need for more infrastructure to support the influx of residents.

As developers eyed the more rural parts of Williamson County for high-density housing, the WIlliamson County Commission changed zoning regulations in an effort to stop the growth in areas with a lack of infrastructure.

In the city of Fairview, located in Williamson County near the Hickman County line, a sewer moratorium was in place from 2006 to 2011 due to chronic overflows.

In comparison, Hickman County experienced flat growth over the past 20 years, due in part to a lack of infrastructure and a poverty rate of 18.7%, according to an engineering report prepared by Water Management Service, LLC for WADC.

While the WADC serves a percentage of Hickman County, only 193 people out of a total population of 24,927 use WADC sewer lines, according to the engineering report.

Hickman County’s largest town, Centerville, is home to 3,561 residents, according to the 2020 U.S. Census Bureau. At its center sits a bronze statue of Minnie Pearl, the iconic country music star born as Sarah Ophelia Colley in Centerville. She overlooks the sleepy square, surrounded by mom-and-pop shops and boarded up storefronts.

In 2004, Hickman County Commission members were approached by the WADC about bringing more infrastructure to the county, which would hopefully lead to economic growth brought on by proximity to Nashville. The agreement authorized and supported a $2 million proposed pipe to run from the new high school to tie into the existing sewer line of WADC.

Years went by and new commissioners were elected to serve Hickman County, and they knew little about WADC’s plans. After learning that WADC now sought to create a $249 million sewer plant along Lick Creek, they became outraged about the agency’s lack of transparency.

We don't want other communities' feces. We have our own.

Commissioners were told East Hickman would receive pump stations and essential lines so when growth came to the area, there would be infrastructure to support it, according to Hickman County Commissioner Austin Page.

“It went from that to ‘we’re not running any extra lines, we’re cutting across farms. We’re putting in a pump station. It’s gonna come from Dickson and Williamson, you guys can tie in at some point,’” he said, adding that a resolution supporting the project preceded his term.

“We don’t want other communities’ feces. We have our own,” he added.

Another Hickman commissioner, Kenneth Nash, who represents the area impacted by the wastewater facility, wrote a letter to TDEC to oppose the water treatment facility, calling WADC a “bad neighbor” that “attempted in the darkness of night to bully their way into a community where they have not been invited or their help requested.”

“At no time has an employee of the WADC, a representative of the WADC or someone acting on behalf of the WADC ever approached me to discuss in any fashion the proposal that has recently became public,” said Nash, adding that the WADC’s board is comprised of unelected members from Dickson County.

As news of the wastewater facility quickly spread, influential residents with homes in Hickman County organized to form Save Lick Creek and held their first meeting on February 19 at Mt. Pleasant Methodist Church on Lick Creek.

Organizers expected only a few people to show up but the church quickly became crowded, with people flowing out the door. Attending were Hickman County commissioners and a TDEC representative, who listened to residents’ concerns.

WADC believes Lick Creek can meet water quality standards even with an additional 12 million gallons a day being discharged into it and has included those calculations in our engineering report to TDEC, which has been accepted and approved by TDEC.

Commissioners and Save Lick Creek leaders requested a six-month delay on any decisions, in order to allow residents to research and look into what effects treated wastewater could have on Lick Creek and its inhabitants. Community leaders pointed out that Lick Creek flowed into Duck River, one of the most ecologically diverse rivers in North America.

Although WADC has yet to host a public meeting with the locals, the agency has contested claims that they mainly serve Dickson and Williamson County.

WADC operates three wastewater treatment facilities in Dickson and Williamson County and have anticipated that over the next 20 years, east Hickman County’s growth depends on infrastructure. And although its engineering report estimates that at most 12 million gallons of wastewater a day would go into Lick Creek, the average would be about 2 million gallons a day, according to Michael Adams, spokesperson for WADC.

WADC also disputed claims that treated wastewater harms the environment and said wildlife will not adversely be affected.

“WADC believes Lick Creek can meet water quality standards even with an additional 12 million gallons a day being discharged into it and has included those calculations in our engineering report to TDEC, which has been accepted and approved by TDEC,” said Adams.

TDEC hasn’t issued WADC a permit but a public hearing would need to be scheduled once a draft permit is completed. TDEC will also consider how the wastewater treatment facility would impact Lick Creek and its inhabitants but will not conduct an environmental study on the potential impacts to private property, as residents have expressed concerns that frequent floods could bring treated wastewater to their homes.

“Public comments that are relevant to water quality and the antidegradation review would be considered by the department when making a permit determination,” said Kim Schofinski, TDEC spokesperson. on

Save Lick Creek members, which include Rodes Hart, a prominent Vanderbilt University alumnus and Nashville commercial real estate executive, and Amanda Mathis, chief financial officer and executive vice-president of Bridgestone Americas, have launched their own research into how treated wastewater can affect the surrounding area.

Save Lick Creek leaders and county commissioners also challenge WADC’s claims that 70% of wastewater would come from Hickman County residents.

“Absolutely not. There’s not even a single neighborhood sewer. There’s a single apartment complex and I own it, it’s only 32 units,” said Page.

“If they’re going to build in our area, it needs to serve our people,” he added.