Analysis: The effect of legislative retirements and uncontested elections in 2022

This 2022 election cycle has been marked by the retirement of more than a dozen state legislators  — a few under unusual circumstances that include, in one case, an indictment  — or in some cases, plans to seek a different elected office.

The 14 retirements in the General Assembly —11 in the House, three in the Senate —are more than double those from the last election in 2020, when there were six, and nearly double that of the last redistricting cycle in 2012, when there were only eight.

But this year still doesn’t hold the record for the greatest legislative turnover: In 2018, almost a quarter of  House members retired.

In March, Sen. Brian Kelsey, R-Germantown, announced he would not seek re-election, citing a “recent, exciting change” to his personal life. The notice came after Kelsey was indicted in October on five counts of violating federal campaign finance laws. The other two retiring senators are Brenda Gilmore, D-Nashville and Mike Bell, R-Riceville.

In  this cycle, only two announced candidacies for other offices: Rep. Bruce Griffey, R-Paris, who was elected as 24th District Circuit Court Judge on May 3, and former Speaker of the House Glen Casada, who lost his bid to become Williamson County Clerk when he was defeated in the May 3 Republican primary.

Most of the representatives who won’t return in 2023 have been  backbenchers, having not spent enough time in the legislature to build seniority and capture a committee chairmanship.  Rep. Eddie Mannis, R-Knoxville, is one of those, retiring after just one term in office.

Many of the uncontested districts are not competitive in most scenarios, which certainly hurts candidate recruitment in those districts. Most of the seats uncontested by Republicans are found in deep blue Memphis and Nashville, while large swaths of rural Tennessee won’t have a Democrat in the race for a House seat. 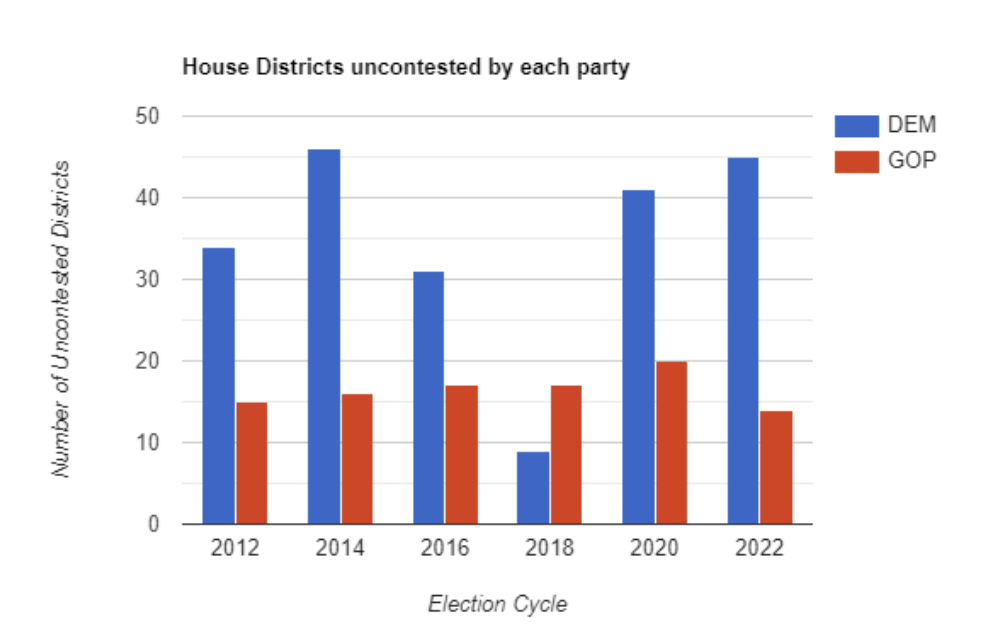 Based on the number of uncontested seats by the Democrats, it’s fair to ask if Republicans have already secured their majority in both the House and the Senate for the next session. In the Senate, because Republicans face no opposition in six districts and they hold 14 districts not up for election until 2024, Democrats cannot flip the Senate even if they win every district in which they have fielded a candidate.

With 45 out of 99 House seats uncontested, Democrats would be hard-pressed to win a majority, although it is not mathematically impossible.

Analysis: The effect of legislative retirements and uncontested elections in 2022

Lucas Brooks is a second-year college student from Knoxville. He first became interested in politics after the 2016 election and maps state legislative election results on his Twitter @LucasTBrooks. In his free time, he loves to hike and cheer on the University of Tennessee Volunteers.

Biden’s State of the Union address by States Newsroom March 1, 2022
Glen Casada: The rise and fall of a House Speaker by Sam Stockard January 10, 2022
Sen. Katrina Robinson: "This has been going on since the… by Eli Motycka January 31, 2022