On a hot and humid Tuesday night, Samantha McAlpine made her daily rounds on Green Street, just south of downtown Nashville, offering food, water and relief to members of the local homeless community.

Across from Green Street Church of Christ, homeless residents emerged from the tents they use as temporary housing.  As they congregated around McAlpine, one man waited patiently for her to finish handing out food and water before he told her he’s  been feeling ill lately. McAlpine checked the man’s temperature, noting that lately several homeless people have been showing signs of heat exhaustion.

“Last week we had to call an ambulance for someone having a heat stroke,” said McAlpine who works for Open Table, a homeless outreach organization.

McAlpine opened the doors to the church, allowing the homeless residents to enjoy an air conditioned room.

“It’s dangerous out there,” she added.

As Tennessee continues to experience a heat wave, nonprofit organizations have worked daily to provide water and resources for Nashville’s homeless population. And although organizers have received assistance from the city, their requests for city officials to open heat-relief shelters have been denied.

According to the Metro Nashville Office of Emergency Management, the heat index must reach 110 degrees before the city considers opening extreme heat shelters.

But advocates for homeless people said temperatures are already causing illness among the people they serve, and the number of places available for relief are limited.

“It’s hard for me as an outreach worker that sees these people sometimes multiple times a week to say, ‘I don’t know where you can go. There isn’t anything,’” said McAlpine. 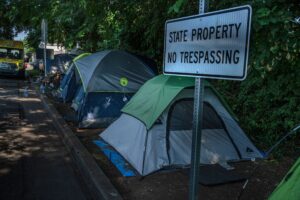 Signs placed by the the state were enacted after a law to criminalize camping on public property took effect July 1. (Photo: John Partipilo) 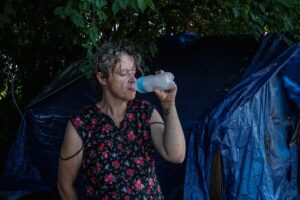 Stephanie, who is homeless, drinks a bottle of water handed out by volunteers to stay hydrated. (Photo: John Partipilo) 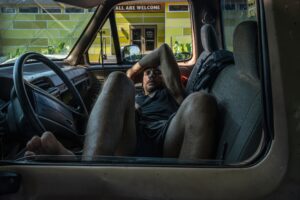 Michael, who lives in his truck, tries to sleep outside Green Street Church of Christ. (Photo: John Partipilo) 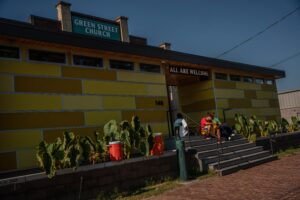 Green Street Church of Christ in Nashville opens its doors to members of the area homeless community. (Photo: John Partipilo) 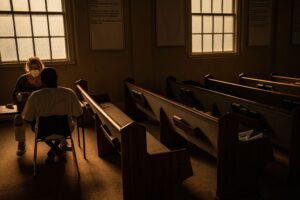 There are a few resources scattered around the city for homeless people to find relief from the summer heat. The Nashville Rescue Mission, Room at the Inn, the Salvation Army and the Community Care Fellowship offer heat-relief shelters while other organizations— Showers of Blessings and Shower the People — offer the homeless mobile services for baths and laundry.

The Metro Nashville Homeless Impact Division (HID) has been handing out bus passes for homeless individuals to take shelter in air-conditioned spaces. As a final resort, the homeless have also been told to find refuge from the heat in public libraries.

“The city is very much involved in providing heat relief,” said Harriet Wallace, HID spokesperson. “We may not be opening one big shelter, but there are multiple heat-relief options across Metro.”

But despite resources being available, they’re not always accessible.

Inside the humid confines of his tent, Jeffrey waits for his girlfriend, who left to pick up a free meal from another shelter.

Although he has a job in construction, Jeffrey has been homeless for 13 years and can’t afford Nashville’s housing market rates. Staying in a hotel is also not an option, since fees can amount to more than he’d pay for an apartment. Family members have offered assistance, but he has declined their help.

“I try not to bother them,” said Jeffrey, who was reluctant to give his full name because of a state law making camping on public property a felony.

In the winter, Jeffrey frequents cold-weather shelters operated by the city.

During hot weather months, Jeffrey often relies on an electric fan he can plug in at the church or on air-conditioned public buses to manage the heat. He may also visit a public library, but he is not allowed to eat or sleep there.

But on the days he’s not working, Jeffrey is reluctant to leave his tent despite blazing temperatures, since someone recently stole his insulin pens, clothes, construction equipment, food and his dog.

“Somebody stole my pitbull. It was a really good dog too,” he said. “I would love to have somebody watching my stuff, but nobody is going to do it for free. You have to at least pay them $10.”

Reluctance to seek shelter among homeless people is not uncommon, said advocates.

“It’s like leaving your house unlocked for the day.  You may come back and everything you own is gone,” said Cathy Jennings, director of the Contributor and chair of the Metro Nashville Continuum of Care Homeless Planning Council.

Libraries have long been used as spaces for those who don’t have anywhere else to go but offer no other resources and can’t help individuals in crisis.

“That buck has kind of passed down to the libraries, and they’re not equipped to deal with people who have as many needs as our friends do,” said McAlpine.

“I run into people all the time who are drinking only a quarter of the water they need in this heat,” she added.

The simplest solution to solving homelessness is housing, said Jennings, but in the meantime, additional supportive services are needed.

In the winter, the council worked with the city to open shelters when temperatures dipped to 32 degrees instead of the specified 28 degrees.

For the summer, the committee requested funding for other organizations to operate shelters around different areas in the city, which Jennings hopes will eventually lead to permanent housing for the homeless .

“Again, housing is what works. Has always worked,” she said.

Homeless advocates are also asking city officials to re-examine their hot weather protocol since temperatures are expected to rise again in the coming weeks, and anything over 91 degrees can lead to heat-related injuries.

“We are doing everything we can to provide fluids and to help get people to cooler places, but we need a space where people – particularly medically vulnerable people and their pets – can get out of the heat for the duration of the heat wave and rehydrate,” said Lindsey Krinks, co-founder of Open Table Nashville, in an email to other organizers.

The Tennessee Department of Health does not track heat-related deaths in the homeless community, but advocates say they think rising heats will lead to fatalities.

“Both heat exhaustion and heat stroke can have devastating and fatal repercussions. We know that heat-related illnesses and injuries are also more likely to impact medically vulnerable individuals. Outreach teams on the ground have already seen instances of heat exhaustion this week,” said Krinks.

On Green Street, Jeffrey counted the minutes until the church was opened and he could plug in his electric fan. Homeless residents also have access to bathing facilities and laundry services at the church.

Beside his tent looms a sign from the state, telling the Green Street residents not to trespass on state property. The sign has only been up for about a month, but Jeffrey is not scared.

“They’re just trying to intimidate us,” he said.

He’s been arrested for trespassing before, and each time the officer decides whether or not he is allowed to take his things with him.

Inside the church, McAlpine listened to the concerns of several homeless residents. She has had basic medical training, but she is far from being a professional and can only do so much.

“None of this is going away until those with the power and money decide to help instead of shove it under the rug, make it illegal to camp and hope that makes people go away,” said McAlpine.

“These are human beings and it’s about time we start treating them like it,” she said.