Polls in Memphis opened Thursday with about 75 positions on ballot, on Aug. 4, 2022. Early voting was busy, election day was a bit slow in the morning at many precincts. (Photo by © Karen Pulfer Focht)

As Tennessee candidates hovered in the blazing sun on Thursday to greet potential voters, they contemplated the months leading up to the August election.

Campbell, who is unopposed in the Democratic primary, said Republican voters have expressed their displeasure both about redistricting and the legislature’s decision to ban abortions in Tennessee. Some, she said, have told her may not vote for Republicans this year.

“We’re hearing from a lot of people that are die-hard Republicans who have decided they can’t do it,” she said.

In District 52, activist Justin Jones and Metro Nashville Councilmember Delishia Porterfield are competing for the Democratic nomination — with no Republican running, the Thursday primary winner will be the next state representative  — and both said they were campaigning up until the last minute before election day.

“We were up knocking on doors until yesterday,” said Jones. 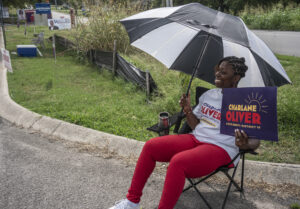 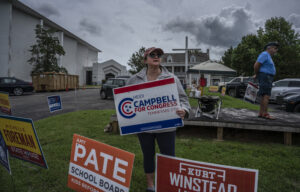 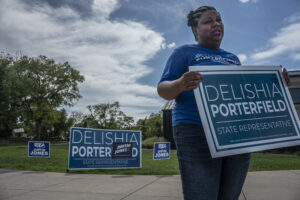 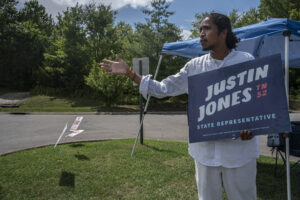 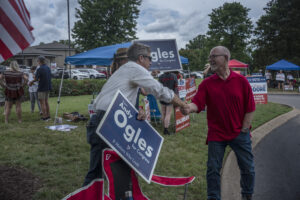 Porterfield said she had been told by voters about their frustrations with redistricting, changing polling locations and numerous elections over the past two years.

“I keep hearing from constituents, they don’t know why we have so many elections,” she said, noting that there were elections in May and August in addition to the federal midterm elections in November.

In Davidson County, road closures necessitated by the Music City Grand Prix 2022, which starts Friday, didn’t make getting to the polls easier.

Neither Porterfield nor Jones were concerned about the low voter turnout in District 52.

“This is the most diverse district. This is a working class district so people want officials who can fight at the capitol, which is a supermajority Republican body,” said Jones.

But while polls in Davidson County had slow traffic Thursday, in neighboring Williamson County, voters formed an hour-long line outside of the John P. Holt Brentwood Library.

Maury County Mayor Andy Ogles, who is campaigning for the Republican nomination in Congressional District 5, said voter turnout had been constant and heavy throughout Maury and Williamson County polls since they opened at 7 a.m.

“We’re up in the polls, so for us it’s about closing strong, which is why attack ads have been so vicious this last month,” he said.

“Low voter turnout in Nashville is good for me,” he added.