The 37-year-old Nashville man was strung out on heroin and fentanyl for about a decade, arrested for felony theft to feed his habit 43 times and convicted 28 times when – fortunately, he says – a judge gave him the break he needed.

Instead of sending him to prison, the judge ordered him first to drug and alcohol treatment, then to check in with Davidson County Community Corrections. The decision saved his life.

Once he got the fogginess out of his brain, he realized he was facing years of hard time if he messed up again. One day the lightbulb came on, and he decided to give the program a chance to work rather than try to game the system.

“If you want a second chance in life, Community Corrections will help you accomplish that,” says Gomez.

He still has 10 years left on probation but has too much going for him to slip up.

“It’s designed for people who want to change. If you go in there with the attitude of ‘I’m just going to skate by,’ it’s a program that’ll catch you. They are very thorough. It’s designed … to weed out the people who are gonna make it and who aren’t,” he adds.

Community Corrections is on the brink of vanishing, though, after the Tennessee Department of Correction issued a request for grant proposals that virtually eliminates the program.

Under the program the Legislature adopted in 1985, Community Corrections groups across Tennessee work with felons who either don’t qualify for probation because their sentences were too long or they flunked probation and likely were headed to prison. Judges sentence convicts to Community Corrections as a last-gasp effort to keep them functioning in society.

Gomez’s officer was Dawn Harper, who still works with Community Corrections, which handles everyone from sex offenders to murderers to drug users and dealers.

“She was an angel in my life. She was not only a good probation officer, she really cared,” he says. “Besides just wanting me to change my life, she actually cared about what was going on in my life. So that helped a lot.”

With weekly reporting, drug tests, constant counseling and a newfound faith, Gomez turned his life in a new direction. Married at a young age, he had a child when he was 17, but after a few years, he got divorced and his life deteriorated.

After being on the brink of prison, with the help of the legal system, he decided to give the Community Corrections program a legitimate chance.

“It made me have more responsibility, more accountability in my life,” he says.

Gomez never felt animosity toward his probation officer or the idea she wanted to have him locked up. For once, he followed the rules, going to Alcoholics Anonymous meetings, passing a weekly drug test, taking a job, turning in his hours, doing community service and other stipulations placed on him.

“I just did ’em. I was kind of tired of living my life in and out of jail, losing everything I had, so I said ‘I’m at least gonna try. What do I have to lose except going back to jail?’” he says.

After a year, he transitioned to state probation about three years ago and says he’s turned his life in the right direction. He’s remarried, has a relationship with his family and owns Faith Works Home Services, doing electrical and home renovations.

It’s designed for people who want to change. If you go in there with the attitude of ‘I’m just going to skate by,’ it’s a program that’ll catch you. They are very thorough. It’s designed … to weed out the people who are gonna make it and who aren’t.

Gomez is disappointed to hear the program could be near its end.

Lawmakers rejected a move by Gov. Bill Lee in 2021 to eliminate the 37-year-old Community Corrections program as he passed a criminal justice reform package. After the Legislature staved off that change, the Lee Administration asked Community Corrections agencies to start providing more detailed data on their programs.

But with a new request for grant proposals sent out in January, the Lee Administration changed the services sought for Community Corrections so drastically that it could kill the program, which serves about 7,000 people statewide, lawmakers and directors say.

Concerned that Lee’s administration made a flanking move around the Legislature, Sen. Todd Gardenhire, R-Chattanooga, is planning to hold hearings to determine what happened.

The program is budgeted at $13.8 million, but in spite of the contract changes, the state wasn’t projecting a savings as old contracts ran out.

Lee said recently that hearings by the Legislature’s Fiscal Review Committee would be “appropriate.”

“We want to make sure the process is right and accurate and a good use of taxpayer dollars and serving the populations that we’re trying to serve in the Department of Corrections efficiently. I think that’s what’s going to happen on that,” Lee said.

Asked about complaints by the Legislature that the governor’s administration made an “end run” around lawmakers, Lee said his administration will work with the General Assembly on the matter.

They’ve lost 13 staff members and are down to 17 since the state started making changes in the program this year. Yet the work is so ingrained in their DNA that they want to keep serving clients.

“I live every day hoping I don’t have a stroke or a heart attack over it all,” Burdette says in an interview at their Justice A.A. Birch Building office in downtown Nashville.

She’s been working in the program since 1997 and considers this the “worst time” the office has ever had.

The program’s new contract is “too difficult,” she says, requiring it to use only residential treatment, which will cut its clients from 832 to 109.

Community Corrections accepts people who have Schedule One drug offenses and sentences of more than 10 years, none of whom are probatable and otherwise headed for prison.

“That’s the day we both about died. I can’t even tell you the tears that flowed,” Baker says.

They started contacting judges telling them they weren’t going to be able to supervise offenders anymore and tried to contact the Department of Correction to find out what was going on but couldn’t get a straight answer other than “some judges are using Community Corrections when they shouldn’t,” she says.

Judges sentence offenders to Community Corrections, instead of state probation, to provide stricter supervision and more requirements. The organization has used separate counseling programs for years, but those are only a part of supervision.

“Some people need that structure. Whether they could be on probation or not, we tend to get them because, obviously, in the past, probation hasn’t worked for them,” Baker says.

Only two locations will be available in each region of the state. In Middle Tennessee, sites are set up in Madison and Rutherford County, meaning probationers will have to travel from across the state to attend classes three days a week.

And they don’t replace Community Corrections as a supervision tool, the two supervisors say.

Judges can waive some Community Corrections requirements, including for offenders who have disabilities. The Department of Correction might have been bothered that some convicts weren’t doing community service, for instance.

But for an 18-year-old caught with heroin for the first time, Community Corrections could be the only option other than prison, a “scary” situation, Baker points out.

Once the offender comes to Community Corrections, it becomes part of a family. The agency prides itself in learning not only about an offender’s life but about their families.

“They’re not a name and number to us. They are an individual that we are trying to help succeed. And, no, not everyone succeeds, and that’s OK too, because they’ll learn and eventually one day will succeed,” Baker says. 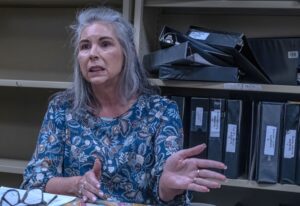 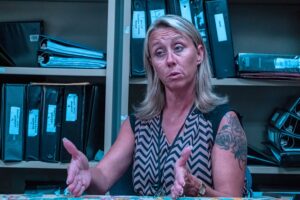 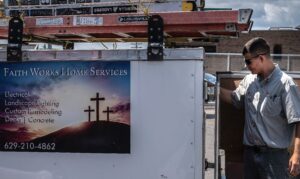 Brandon "Lane" Gomez, attributes his experience with Community Corrections to turning his life around: He kicked drugs and alcohol, remarried and started a business after going through the program. (Photo: John Partipilo)

But those who shift to state probation and talk to an officer only once every six months won’t have the support system to stay off drugs or avoid a return to crime.

Since the COVID-19 pandemic hit, for instance, Gomez says he’s seen a state probation officer only one time, reporting mainly by phone every few months. If he’d been sentenced to state probation initially, he says he likely would have failed and gone back out on the streets or to prison.

“They’re there to help. It’s very strict. It’s not like state probation, which I’m on now. They have a lot of rules, guidelines, steps that you have to take, really to help rehabilitate or re-entry situations,” Gomez says.

Gomez is disappointed that Community Corrections could be on the way out because it works better than state probation for those involved in drugs and alcohol and criminal activity.

He’s already had five or six different officers since coming off Community Corrections and going on state probation.

Without the accountability and “routine of doing right” through Community Corrections, Gomez believes he would have gone the wrong way. State probation officers don’t check up on offenders, he says and he doubts they even care.

“I was headed for prison or death, the life I was living with drugs and alcohol. If it wasn’t for Community Corrections, I wouldn’t have a relationship with my family, my son,” he says.

Gomez believes he wouldn’t have remarried or started a business either.