Tennessee on Thursday became the latest state in the nation to ban abortion, implementing a strict new law with no exceptions for rape, incest or fatal fetal anomalies while subjecting doctors who choose to perform lifesaving abortions to the risk of criminal prosecution.

The state’s Human Life Protection Act is among the toughest abortion bans in the nation and one of three so-called “trigger bans” to take effect on the same day. Texas and Idaho trigger bans also go into effect Thursday.

Altogether, at least a dozen states have implemented some form of abortion ban since the June 24 Supreme Court’s decision in Dobbs v. Jackson Women’s Health Organization ended Constitutional protections for abortion, according to the Center for Reproductive Rights.

Abortion foes in Tennessee celebrated Wednesday. Tennessee Right to Life, the powerful lobbying group that served as the architect of the ban, tweeted Wednesday that they have waited nearly 50 years for the day to arrive.

“The end of abortion-on-demand in our state is a badge of honor for Tennessee,” State Rep. Susan Lynn, a Republican from Mt. Juliet and one of the law’s chief sponsors, told WGNS radio.

But advocates for abortion rights voiced sorrow — and anger.

“This trigger law is depraved and heartless, and it is anything but Christian,” Ashley Coffield, CEO of Planned Parenthood of Tennessee and North Mississippi told reporters Wednesday. “And Gov.  (Bill) Lee and the Tennessee General Assembly have created a climate of fear. They’ve abandoned us. And they have left us with a totally manufactured crisis of their own making.”

The end of abortion-on-demand in our state is a badge of honor for Tennessee.

Most abortions in Tennessee have already come to a halt. Planned Parenthood clinics in Nashville and Memphis ended abortion services within days of the Supreme Court decision, when a 6-week abortion law took effect almost immediately.

Clinics that continued to provide abortions during the narrow 6-week window saw far fewer patients. CHOICES, a Memphis clinic, reported seeing one-tenth the number of usual abortion patients after the 6-week ban took effect.  CHOICES was one of three clinics that have continued to provide abortions since the Supreme Court decision. All three announced they would end abortion services Wednesday.

“Patients were confused and in total shock about what had happened,” Coffield said. “They really didn’t see this coming. They believed that providers like Planned Parenthood would fight back, and there would be a path for us to protect this right. And, unfortunately, we had to explain to our patients that we didn’t have one.”

Enacted three years ago in anticipation of an eventual Supreme Court ruling ending abortion rights, the trigger law’s language has come under increased scrutiny in recent weeks, with questions about whether a ban — and criminal penalties — apply to situations that vary from certain IUD’s used as emergency contraception to how gravely ill a pregnant patient must be for a physician to be able to justify an abortion. 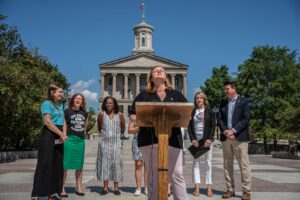 Sen. Heidi Campbell talks to media on Wednesday about the impact she anticipates Tennessee's abortion ban to have. (Photo: John Partipilo) 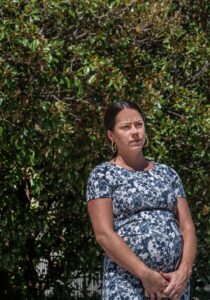 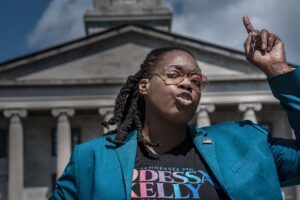 “The enforcement of this law, how it’s interpreted, how it’s put into effect in Tennessee is all left to be seen,” Coffield said.

The law’s language contains no specific exception for lifesaving care. Instead, it says a physician may defend him- or herself against criminal charges by demonstrating the “abortion was necessary to prevent the death of the pregnant woman or to prevent serious risk of substantial and irreversible impairment of a major bodily function of the pregnant woman.”

Will Brewer, Tennessee Right to Life’s lobbyist, told the Lookout last month the language is intended to protect doctors. “It is in there as an added protective measure for the doctor and it’s in his professional judgement whether that was the nature of the operation, so I really don’t see a criminal investigation going past that,” Brewer said.

This trigger law is depraved and heartless, and it is anything but Christian.

It is the first time since Tennessee first began regulating abortions more than a century ago — in 1883, according to state Supreme Court records — there has not been specific language in the state’s abortion rules to “preserve the life of a pregnant women.” The 1883 law banning abortions  contained that language, and remained in effect until the 1973 U.S. Supreme Court decision in Roe v. Wade opened access to abortion across the nation.

“Now our legislature makes physicians’ jobs even harder by crafting a legal system where pregnancy care providers will feel like there is a target on their back even more than usual,” Dr. Amy Gordon Bono, a primary care physician, said Wednesday at a press conference in downtown Nashville.

Bono was joined by Democratic state lawmakers who urged Tennesseans opposed to abortion restrictions to vote for pro-choice candidates.

“Our Tennessee daughters deserve to grow up with the same rights and freedoms that our Tennessee sons have,” said state Sen. Heidi Campbell, a Nashville Democrat who is running for Congress in District 5.

“This is literally democracy versus fascism,” said Odessa Kelly, a Democrat running for Congress in District 7.

Compounding the uncertainty over Tennessee’s law is a Biden Administration guidance that federal law — known as the Emergency Medical Treatment and Active Labor Act— protects healthcare providers who perform emergeny abortions in order to safeguard the life or health of pregnant patients. The federal law supersedes any state law, the guidance said.

A federal judge on Wednesday temporarily blocked the Biden guidance from applying to Texas, at the request of the state’s attorney general.

In Idaho, the U.S. Department of Justice filed suit over the state’s trigger ban, which — like Tennessee’s ban — requires physicians to be able to prove an abortion was necessary to prevent a patient’s death as a defense to criminal prosecution. Unlike Tennessee, Idaho’s ban does not provide a legal mechanism for doctors to perform abortions to prevent grave bodily harm.

Late on Wednesday, a federal judge in Idaho temporarily blocked a portion of the state’s law that banned abortions to protect a pregnant woman’s health. The judge ruled Idaho’s trigger law conflicted, in part, with the Biden Administration guidance.

Tennessee Attorney General Herbert Slatery III has not taken a public position on how, or whether, the Biden Administration guidance applies to Tennessee’s trigger ban, a spokeswoman said Wednesday.

Biden’s State of the Union address by States Newsroom March 1, 2022
'We need to defend this law': Inside an anti-abortion… by Kavitha Surana November 15, 2022
On the record with Metro Nashville Public Schools board… by Dulce Torres Guzman July 28, 2022