Paige McCay (right) and Bradley Owens (left) both found out they were out of a job through a notice on Chaatable’s door. (Photo: Dulce Torres Guzman)

According to managers of Chaatable, an Indian restaurant owned by celebrity chef Maneet Chauhan, Friday was business as usual. But workers were suspicious.

For months, rumors spread that Chaatable would be closing after four years in business.  Staff members learned from public documents that the management wasn’t renewing the restaurant’s lease and waited to hear details. Finally, several confronted Chauhan.

“We asked, ‘what’s going on? Why haven’t you told us?’’’ said Paige McCay, a Chaatable waitress for three years.

But they were told not to worry. If anything were to happen, “you’d be the first to know,” managers told staff members.

Rumors continued, including one that the restaurant would close by the end of August. With their worries and frustrations mounting, staff members sent a collective email to management.

“We were scared of retaliation so we sent it from a third party email. We just wanted answers,” said Bradley Owens, a Chaatable employee. 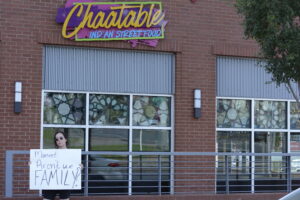 A staff member of Chaatable, who arrived for work to find the restaurant closed with no warning. (Dulce Torres Guzman) 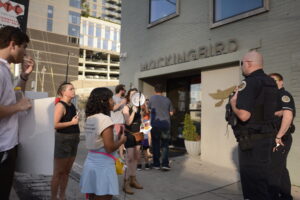 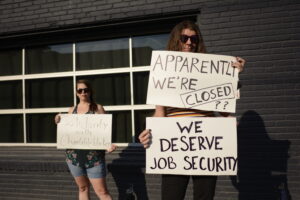 “We said, ‘hey we have staff that are very vulnerable and cannot afford to miss a paycheck, so can you please have a meeting with us?’” said McCay.

“They responded, ‘who is this, why won’t you tell us your name, we’ve already told you everything,’” she said.

Then, after management organized an impromptu meeting with half the staff missing, informing them to start looking for other jobs, the remaining workers organized in an effort to force Chauhan and her team to talk to them.

On Friday, workers arrived at Chaatable to start their shift, only to find a note on the door announcing its closure. Workers were given no prior notice.

Since some staff members had been offered jobs at Chauhan’s other restaurants – Mockingbird and Chauhan Ale & Masala House on 12th Avenue North – McCay and others who weren’t said they were being retaliated against for their organizing efforts.

“We don’t have any source of income. They didn’t offer severance, payment to get us through until we find another job,” said McCay.

A spokesperson for Chaatable said industry-wide hardships and COVID  impacted the business and that unionizing efforts have nothing to do with the restaurant closing.

“We support hospitality workers unequivocally and are providing a generous severance to all employees who qualify,” said Brenna Bagby, spokesperson for Morph Hospitality. “Chaatable has been such a source of joy for us, and we’re hoping to find it a new home soon so we can welcome back our employees and our customers.”

Ex-Chaatable staff and members of the employee-rights group, Worker’s Dignity, headed to Chauhan’s other restaurant locations to protest. Diners arriving for a Friday night dinner witnessed the group’s efforts to shame Chauhan and her management staff.

“Maneet Chauhan has fired every employee at Chaatable without notice. Her employees arrived to work today to a sign on the door saying they were closed,” said McCay through a loudspeaker.

After a few encounters with managers from Mockingbird, police arrived to confront the protesters, who argued that they were on public property. Police left, making no arrests.

Protesters continued to chant through the dinner rush, with some customers stopping to ask about the incident.

By 6 p.m. the protesters finished their demonstration. While they had been scheduled to work from 4:30 p.m. to closing time, McCay and her group found something else to do on a Friday afternoon before worrying about their next paycheck.

Like many Nashvillians, McCay has other jobs to make ends meet. Owens started applying for other jobs.

“My car just broke down so I’m in a rough place, but I’ll be okay for the next month and hopefully I’ll find a job,” said Owens.

Biden’s State of the Union address by States Newsroom March 1, 2022
How to pay for a football team by Jamie McGee November 16, 2022
Glen Casada: The rise and fall of a House Speaker by Sam Stockard August 23, 2022