In a state public hearing dominated by supporters of Hillsdale-affiliated American Classical Academy Rutherford, opponents of the charter school say they were shut out of a chance to speak.

By the time Elizabeth Vollbrecht tried to sign up to voice her views at Wednesday’s event run by the Tennessee Public Charter School Commission, the deadline was gone, leading to what she called a “one-sided” hearing.

“There was no fairness, no equity or diversity in understanding the whole community’s opinions on the charter school. You only heard one side. They jammed it through,” said Vollbrecht, a parent of three students in Rutherford County Schools. “They opened it up to sign up and jammed all their spots through.”

Fifteen people signed up for the allotted number of speaker openings, but three of those didn’t show up, and when Vollbrecht and another woman asked to speak, they were refused, she said.

The Public Charter School Commission conducted its hearing Wednesday after American Classical Education appealed the Rutherford County School Board decision to turn down a charter application for American Classical Academy of Rutherford. It is an affiliate of Hillsdale College, whose president drew fire this year when he was recorded saying teachers come from the “dumbest parts of the dumbest colleges in America.”

There was no fairness, no equity or diversity in understanding the whole community’s opinions on the charter school. You only heard one side. They jammed it through.

Gov. Bill Lee, at the same reception in Franklin, said he hoped Hillsdale would start 100 charter schools in Tennessee. Despite being repeatedly questioned by reporters, Lee refused to rebuke the statements of Larry Arnn, saying only that he supports Tennessee’s teachers.

Arnn’s views and Lee’s refusal to publicly reject them drew a firestorm of criticism statewide this summer. One lawmaker said the Legislature would stop Hillsdale-affiliated schools from being approved, though it’s unclear what authority the General Assembly has over the Public Charter School Commission.

That body, which is appointed by Gov. Lee, will have the final say on whether the charter is granted for American Classical Academy of Rutherford after the local board turned it down in a 6-1 vote. A district committee recommended it be rejected, mainly for failing to meet state standards. 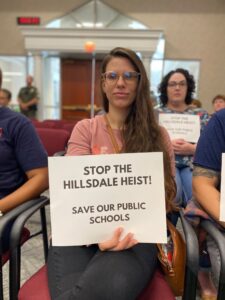 Similar hearings are scheduled Thursday in Jackson and Friday in Clarksville for two other Hillsdale-affiliated charter applicants.

In Murfreesboro, most speakers were parents who told the Public Charter School Commission staff they want school “choice” for their children.

Priscilla Sanders told the state panel she has witnessed how “off-track” schools have gotten and wants a return to “fundamentals” a classical education can bring.

“Choice is an important aspect of freedom in our society,” Sanders said.

Classical education is defined as a traditional liberal arts education that includes study of the natural sciences, Western literature and fine arts.

Even though the school board turned down the charter application, new board Chairman Tammy Sharp told the panel she supports approval of the application. She was the only vote in favor of it earlier this year but believes under the newly-constituted board, elected in August, it would be approved.

“We’ve got a great system, and everyone wants to move here,” Sharp said. But she pointed out the school district is hampered by overwhelming growth with more than 2,000 new students this year and a $500 million long-term building program.

Those two aren’t expected to be ready to open next year, she said. American Classical still doesn’t have a site for a school building, according to testimony.

Michelle Garcia, a Rutherford County resident and volunteer board member for American Classical Education, sent out a statement after the hearing saying people shouldn’t be “distracted by false media narratives and political opportunists who want to silence local families.” She pointed out parents want a “different educational option” and asked the commission to consider the request without bias.

Garcia also criticized what she called “planned coordination” between the media, political candidates and out-of-county residents for a protest outside the school district office before the hearing was held.

“Many parents want that (classical education) option for their kids,” Garcia said in her statement. “And the media has chosen not to report on the many local families who want a different public education option for their children. That is a sad state of affairs.”

State Sen. Shane Reeves, a Murfreesboro Republican who attended the event, said afterward having charter schools in the county could be “good for parent choice.” If they don’t work, the school district could try something different, he said.

Reeves shied away, though, from saying he believes the Public Charter School Commission should overturn the school board’s decision, even as he agreed with Sharp’s contention that the new board might have a different vote.

“I support options for our parents. That’s not an indictment on public schools,” Reeves said.

Pressed on whether he supports a charter for American Classical Academy Rutherford, Reeves would only say he supports charter schools in Rutherford. He declined to speak about Arnn’s statements.

Bullard also questioned the charter applicant’s English language arts curriculum, a lack of research by students, shortage of special education opportunities, outdated materials, poor growth in other states where it operates schools, lack of a school site and “insufficient” ability to open a K-12 school.

The district’s review committee came up with the recommendation to reject American Classical’s charter application before Arnn made his comments, she said. Yet she acknowledged the board does not “operate in a vacuum” and the comments were “problematic” for the school district.

Bullard also said American Classical was “disingenuous” in saying it could save county taxpayers $30 million by opening a charter school. She noted it would not address growth in Smyrna, La Vergne, Blackman and Rockvale areas.

Questions were raised in the hearing, as well, about the American Classical board of directors, whose membership changed dramatically from out-of-state people at the start to a board with mostly Tennessee representatives, including former state Sen. Dolores Gresham.

American Classical attempted to separate itself from Hillsdale, yet even new members have connections to the college, according to Bullard.

American Classical officials defended their curriculum as “rigorous” and one that would challenge students.

But when asked by commission representatives about the change in its governing body, American Classical representative Rich Haglund declined to explain the shift. He only said different legal entities are involved and that the charter sponsor’s governing body has not changed.

Haglund further claimed it would be a “waste of time to be talking about it today.”

State Rep. Gloria Johnson, a Knoxville Democrat who attended the meeting, continued her opposition to the charter organization afterward.

Johnson said the American Classical representatives seemed to think they were “very superior and entitled” yet had no evidence to back up their claims, Johnson said.

American Classical said its students nationally read at a higher level than those in Rutherford County and also have better graduation rates. But none of their schools nationwide have demonstrated that ability, Johnson said.

Said Johnson, “We have a local board of education saying, no, this is not something we want. Then you have a governor with a handpicked board of unelected folks who support his ideology, giving a state contract, if they do this, to his buddy, Larry Arrn.”