Thousands of President Donald Trump’s supporters storm the U.S. Capitol building following a “Stop the Steal” rally on Jan. 6, 2021 in Washington, D.C. The protesters stormed the historic building, breaking windows and clashing with police. Trump supporters had gathered in the nation’s capital to protest the ratification of President-elect Joe Biden’s Electoral College victory over Trump in the 2020 election. (Photo by Spencer Platt/Getty Images)

A Tennessee man who breached the U.S. Capitol in the Jan. 6, 2021, insurrection, told law enforcers they were “going to die,” assaulted two officers, smoked marijuana inside the building in celebration, stole a book from a Senate office as a souvenir and made plans to sell footage of his attack after his arrest pleaded guilty to federal charges Friday.

Ronald Sandlin, 35, of Millington, Tenn., pleaded guilty in U.S. District Court in Washington, D.C., to charges of conspiracy to obstruct an official proceeding — the certification of the 2020 presidential election results — and assaulting and impeding police.

Federal prosecutors say in a plea agreement they intend to seek a penalty range of 63 to 78 months at Sandlin’s Dec. 2 sentencing hearing. Sandlin, who was arrested three weeks after the insurrection, remains jailed.

Your life is not worth it today. You’re going to die.

Court records filed in connection with Sandlin’s plea show he conspired with two other men —Nathaniel DeGrave, 33, of Las Vegas, Nevada, and Josiah Colt, 35, of Idaho — to take the Capitol building by force. The trio suited up for the attack with guns, a knife, bear mace, a stun gun, protective gear and gas masks and captured their crimes on video. DeGrave and Colt have already pleaded guilty and, like Sandlin, now face sentencing.

“Stop the steal and stand behind (former President Donald) Trump when he decides to cross the rubicon (sic),” Sandlin wrote in a Facebook post in the run-up to the insurrection.

‘There is going to be violence’

Court records show Sandlin created a GoFundMe page to solicit donations to cover expenses and recruited DeGrave and Colt to join him. On the page, entitled “patriots defending our country,” Sandlin posted “what appeared to be a photo-shopped image of (his) face superimposed on the image of a man in a car holding what appears to be a gold-plated semi-automatic rifle.”

“The only thing necessary for the triumph of evil is for good men to do nothing,” Sandlin wrote. “Ronnie Sandlin needs your support for patriots defending our country on Jan. 6.”

“They discussed ‘shipping guns’ to Sandlin’s residence in Tennessee,” a statement of facts in the case reads. “Colt said he would try to fly with his … Glock pistol. Sandlin later stated that he was bringing his ‘little pocket gun’ and a knife.”

In the days before the attack, Sandlin posted a photo on Facebook of Colt lying in a bed holding a gun. The caption read: “My fellow patriot sleeping ready for the boogaloo on Jan. 6.” Colt responded, “Ready for any battle.”

They attended Trump’s “Stop the Steal” rally and were headed to lunch when “a can of bear spray accidentally discharged in DeGrave’s pocket.” The rental vehicle filled with mace. Colt posted a video of the trio “coughing.”

Undeterred by the bear mace gaffe, the trio dined at a TGI Friday’s restaurant and watched Trump’s rally speech on a television inside. Sandlin them began live streaming a call to “fellow patriots” to “take the Capitol.”

“In the video, Sandlin stated four times that ‘freedom is paid for with blood,’” court records state. “He also stated, ‘There is going to be violence.”

A toke for a job well done

Using walkie talkies to communicate, the armed men set out to breach the Capitol, which was already under attack by then with rioters pushing against law enforcers to gain entry. 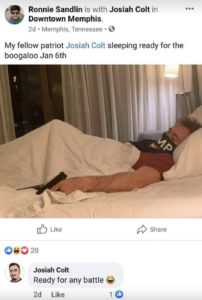 “They just breached the Capitol building,” DeGrave announced in a video of the trio’s arrival. “That’s it, bro. It’s game time. We all armored up. We got a gask mask. This is what separates us true patriots from everyone else who is all talk … It’s Dr. Death in the building, and it’s about to go down.”

As the men forced their way into the building, Sandlin can be heard shouting, “We made history. God is on your side.”

Sandlin joined in efforts to push past law enforcers, telling them, “Your life is not worth it today. You’re going to die. Get out of the way.”

Sandlin admits in his plea agreement that he grabbed one officer’s helmet and struck another officer in the head during the melee.

“The trio, along with dozens of other rioters, eventually made their way to a hallway just outside the Senate Gallery, a balcony overlooking the Senate Chamber,” prosecutors wrote.

After the rioters pushed past law enforcement guarding the chamber, Sandlin “recorded a selfie-style video” in which he shouted, “We took it. We did it.”

Sandlin then filmed himself smoking a marijuana joint, remarking, “We made history. This is our house.”

Court records state Sandlin stole a book from a Senate office as a souvenir and tried to make off with an oil painting but other rioters took it from him.

Once he returned home, Sandlin took steps to erase his social media of any evidence of his involvement in the insurrection but kept his cellular phone video footage, prosecutors state.

“Before he was arrested, Sandlin encrypted his footage of the riot at the Capitol and gave it to his friend for safekeeping,” the statement of facts reads. “While detained (after his Jan. 28, 2021, arrest), he instructed the friend to watermark the footage so that it could be used to pitch the footage for sale to media outlets.”

Jamie Satterfield is an investigative journalist with more than 33 years of experience, specializing in legal affairs, policing, public corruption, environmental crime and civil rights violations. Her journalism has been honored as some of the best in the nation, earning recognition from the Scripps Howard Foundation, the Society of Professional Journalists’ Sigma Delta Chi Awards, the Green Eyeshade Awards, the Tennessee Press Association, the Tennessee Managing Editors Association, the First Amendment Center and many other industry organizations. Her work has led to criminal charges against wrongdoers, changes in state law and citations in legal opinions and journals. She was married to the love of her life for 28 years and is now a widow and proud mother of two successful children of good character and work ethic.