Charlane Oliver, Democratic nominee for State Senate District 19, said “It shouldn’t be this hard to vote in Tennessee,” at a Wednesday press conference to protest a voting snafu in Davidson County. (Photo: John Partipilo)

“This is the result of a racist, bigoted, money-hungry Republican Legislature who is doing everything to hoard power to keep the system rigged against everyday working-class people,” said Nashville resident Odessa Kelly, the Democratic candidate for the 7th Congressional District seat.

Kelly is running for the 7th Congressional District seat against Republican U.S. Rep. Mark Green of Ashland City, who also questioned the district maps recently and called them “inherently unfair.”

“I’m shocked and disappointed to hear about the balloting issue in Davidson County,” Green said in a Wednesday statement. “No one should ever have to worry about whether or not their vote was cast properly. The Davidson County Election Commission needs to fix this immediately. We are closely monitoring the situation.” 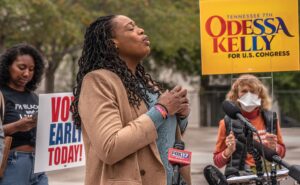 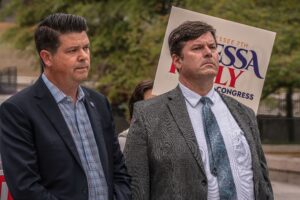 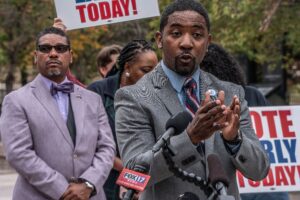 The GOP-controlled Legislature split Davidson County into three districts during the redistricting process, pairing them with suburban and rural counties and creating a situation that would make it easier for a Republican to win a congressional seat in the longtime Democratic stronghold. Critics of the redistricting say it split black voters into three districts to dilute their voting power.

The plan put a large number of Black voters from Nashville in Green’s district, forcing him to campaign in new Democratic territory.

A total of 190 voters cast votes on incorrect ballots for congressional races, six in state House races and 16 in state Senate races, according to Roberts. The errors affected Davidson County voters in the 5th, 6th and 7th congressional districts and were likely on ballots during the August primary as well, Democrats said.

In a press conference on the War Memorial Plaza, Tennessee Democratic Party Chairman Hendrell Remus called on the Davidson County Election Commission to fire Roberts after he seemingly downplayed the matter by telling the Associated Press, “mistakes happen.” Roberts said early Wednesday the problem was solved, but the previous day he told the AP that those who were given incorrect ballots would not be able to vote again.

The Democratic Party’s attorneys are looking into the matter, but the party declined to comment on potential legal action Wednesday.

Democratic candidates argued Wednesday that splitting Davidson County into three districts was the impetus for the foul-up.

State Senate candidate Charlane Oliver of Nashville, who is expected to win election in the Nov. 8 vote, was “outraged” at the erroneous ballots, noting a poll worker tried to tell her she wasn’t registered to vote this fall, even though she was on the ballot.

Oliver pointed out she organized a protest of the district maps 10 months ago.

“Because we knew then what would happen today … by design our supermajority Republicans, and all of them are complicit right on down to our Secretary of State Tre Hargett, who don’t know how to do their jobs, who don’t know how to govern, and they love to claim voter fraud. They are the real frauds,” she said.

Reacting to the foul-up, Adam Kleinheider, spokesman for Republican Lt. Gov. Randy McNally, deflected any criticism of the Legislature.

“Davidson County’s error is clearly regrettable,” Kleinheider said in a statement. “Lt. Gov. McNally is thankful to the Associated Press for bringing the issue to light and to the county for working quickly to rectify the error. He encourages Davidson County to examine their internal processes in order to avoid repeated problems in the future.”

However, House Democratic Caucus Chairman Vincent Dixie dismissed the notion that the errors could have occurred in any county where precincts were split.

“This is a huge product of gerrymandering,” Dixie said. “If you left Nashville whole, you know where the boundaries are or if you cut it in a particular landmark where there’s a highway or river or district line, you know where it is.”

Democratic gubernatorial candidate Jason Martin called the errors another case of “voter suppression” in the state and a “pattern of disenfranchising voters,” mainly those in “marginalized communities.”

For instance, in Davidson County, early voting was initially limited to one site for early voting when it started two weeks ago. It ends Thursday.

“This is blatant disenfranchisement,” Martin said.

He urged anyone who runs into problems voting to call a voter protection hotline at 1-866-6VOTETN.

Oliver also blasted Roberts for saying the election office couldn’t do anything to help those who filled out incorrect ballots.

“Get in there and figure it out. You know what the voter file looks like. You know who has voted. Contact every voter who has cast a ballot incorrectly and let them correct it,” she said.

The Secretary of State’s Office did not respond to Oliver’s criticism, saying it was made aware of a possible problem Tuesday afternoon and started investigating the matter before it contacted Roberts about the situation, according to spokeswoman Julia Bruck.

Our office does not play a role in the assignment of voters to their respective districts. That responsibility rests with the county election commission.

The office determined the problem affected more than one voter and shared its research with Roberts, who agreed the problems needed to be fixed before polls opened Wednesday for early voting. The Davidson County Election Commission worked until 4:30 a.m. to correct the problem, according to Bruck.

“Our office does not play a role in the assignment of voters to their respective districts. That responsibility rests with the county election commission. Once voters are assigned according to redistricting, that information is added to the voter registration records,” Bruck said in a statement.

Voters can find out what district they live in at GoVoteTN app or the Tennessee General Assembly website or Comptroller’s website, or by calling 1-877-850-4959, Bruck said.

The ballots some voters received, though, did not match the state’s websites. According to Roberts, the office inadvertently put some voters in the wrong districts when their precinct was split by a street.

One of the main criticisms of the redistricting plan is that instead of using rivers and main roads to create districts, it went into neighborhoods and used small streets to cut up precincts in an effort to balance the numbers in the three congressional districts.

Again targeting the Legislature and Davidson County Election Commission, Oliver said, “This is on you all, and it shouldn’t be this hard to vote in Tennessee.”

Davidson County Election Commissioner A.J. Starling said Wednesday he had just heard about the problem that morning and was “trying to get up to speed.”