A federal judge has denied a request by two Tennessee Tech professors to overturn disciplinary action levied against them after the pair posted fliers on campus calling a fellow professor a ‘racist.’

Julia Gruber, Ph.D. a tenured professor of German at the Cookeville university, and Andrew Smith, a tenured instructor in the English department, alleged in a lawsuit that Lori Bruce, Tennessee Tech Provost and Vice President for Academic Affairs, retaliated against them for asserting their First Amendment rights. The pair also claimed Bruce violated due process claims inherent in the 14th Amendment.

Waverly Crenshaw, chief judge for the U.S. District Court for the Middle District of Tennessee, ruled Gruber and Smith failed to prove either portion of their case, while granting a summary judgment for dismissal of the case to Bruce.

According to court documents, Gruber and Smith created and posted fliers on Feb. 5, 2021, featuring Andrew Donadio, Ph.D., an assistant professor of nursing at Tennessee Tech who also serves on the Putnam County Commission.

Donadio also serves as faculty advisor for the campus chapter of Turning Point USA, which launched at Tennessee Tech in early 2021. Turning Point identifies itself as a conservative organization that “empowers citizens of all ages to Rise Up against the radical left in defense of freedom, free markets, and limited government.” The group publishes a “Professor Watchlist” to “expose and document college professors who discriminate against conservative students and advance leftist propaganda in the classroom.”

But it was Donadio’s reaction at a Feb. 4, 2021 meeting of the Putnam County School Board that apparently pushed Gruber and Smith into action, according to legal documents. 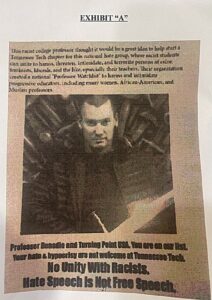 The school board meeting was held to discuss appointing a committee to review changing the name of a middle school’s mascot from “Redskins.” Gruber and Donadio attended separately, and afterwards Gruber noted Donadio cheered and applauded when the board voted against the measure.

After discussing the incident with Gruber, Smith created a flyer featuring a photo of Donadio and referred to him as a “racist college professor.”

The flyer described Turning Point as a “hate group, where racist students can harass, threaten, intimidate and terrorize persons of color, feminists, liberals, and the like, especially their teachers.”

It also said: “Professor Donadio and Turning Point USA. You are on our list. Your hate & hypocrisy are not welcome at Tennessee Tech.”

Gruber and Smith posted “a handful” of flyers around campus, prompting a complaint from Donadio against the pair to Tennessee Tech’s Office of Human Resources.

Following an investigation, Bruce determined the purpose of the flyer was to target Donadio and to threaten and harass the students involved in Turning Point. As discipline, Bruce informed Gruber and Smith that neither would be allowed to serve as a faculty advisor to student organizations, participate in study abroad programs or be eligible for non-instructional faculty assignments. Both would be ineligible for salary increases for one year.

In their suit against Bruce, Gruber and Smith asserted they were acting as private citizens and not as representatives of the university and that the information posted on the flyer was a matter of public concern and thus was protected by the First Amendment.

The pair of professors also asserted they were given no opportunity to respond to Donadio’s accusations or to pose written questions, denying them right of due process.

Crenshaw disagreed, writing in his December 1 opinion that legal precedent does not establish that all speech by public employees touching on matters of public concern is protected by the First Amendment.

Crenshaw also shot down claims that Gruber and Smith were denied an opportunity to defend themselves, noting that not only two were given notification by the university’s human resources department of the procedural process to be followed in the investigation of their actions but that Bruce interviewed them, allowing them to participate in defense of their actions.