One of Nashville’s last “meat and three” restaurants, closed Saturday after 40 years in business. Lines of diners streamed into the nearby parking lot throughout the day. (Photo: John Partipilo)

Visitors to Nashville seeking favorite restaurants among locals have for 40 years been directed to a modest brick and cinderblock building, from which plates of roast beef and fried chicken, macaroni and cheese, turnip greens and whipped potatoes, banana pudding and improbably delicious hot pepper chocolate pie have issued by numbers uncountable.

But on Saturday, the kitchen crew at Arnold’s Country Kitchen handed out the last laden plate from its cafeteria-style line, after serving hundreds of diners who stood in line throughout the day.

One of the last in Nashville of a genre known as “meat and three” — your choice of meat and three side dishes — Arnold’s closed after owner Rose Arnold sold her Gulch-adjacent property for life in retirement.

Arnold’s’ closure follows that of not only other meat and threes of yore, including Sylvan Park, the C&J Diner and more recently, Dandgure’s, but other quintessentially Nashville food and entertainment establishments. Rotiers, home of the French bread burger, closed in 2021. In 2022 came the shuttering of the Mercy Lounge and the Exit/In, both near legendary venues for live music.

The “Rock Block,” as Elliston Place was long known, is decimated. A block packed with live music clubs, paraphernalia stores, a dusty bookstore carrying rare tomes, and bars like the Gold Rush, where one could get the best burrito east of Austin, a stiff drink or, rumor had, illegal substances on the second floor, is now home to only one of its longtime businesses — the Elliston Place Soda Shop.

Sure Arnold’s had good food; pies your grandmother would be proud to claim, for instance. But its closure is about more than food. To write about the “soul of Nashville” has become cliched, but cliches arise from truths.

Tennessee’s capital city has more hotels than you can shake a stick at. Its got three major league sports teams, conventions galore, pricey restaurants by big name chefs for diners with fat wallets and scads of tourists roaming the downtown streets.

Change is a constant fact of life. And Ms. Arnold deserves a happy retirement; God knows she’s spent enough time on her feet. But I’ll mourn the latest loss of a Nashville institution and wonder what living memory of mine falls next. 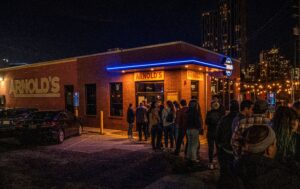 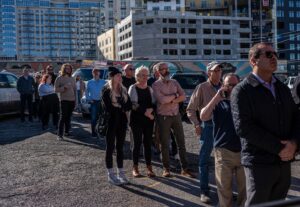 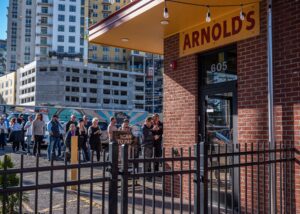