More than 150 Tennesseans gathered on the Legislative Plaza before legislation session gaveled in to urge lawmakers to support a “moral agenda.” (Photo: John Partipilo)

Dozens of progressive advocates rallied near the Capitol Tuesday before the 113th General Assembly convened, calling for everything from an end to the state’s abortion law to expansion of Medicaid.

Pastor Kevin Riggs of Franklin Community Church urged the Legislature to pass a “moral agenda,” one that serves people on the “fringes” of society.

“A moral agenda protects healthcare by expanding Medicaid and resourcing rural hospitals so they remain open, ensuring emergency healthcare to those in the farthest corners of our state,” Riggs told a crowd of shouting and sign-holding Tennesseans assembled on the War Memorial Plaza shortly before noon.

Numerous people dressed in drag and wore rainbow pride clothing for the event, and Riggs asked the Legislature to reverse “discriminatory and oppressive” bills against the LGBTQ community.

Riggs also harangued Gov. Bill Lee’s education policies, saying he should put more emphasis on providing public schools with resources and increasing teacher pay rather than diverting funds to private school vouchers and charter schools. The Legislature approved the governor’s plan to spend another $1 billion on K-12 schools last year and to set up a new funding formula based on individual student needs. 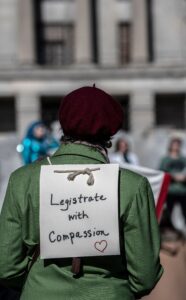 A woman at a rally prior to the convening of the Tennessee General Assembly, with a message. (Photo: John Partial) 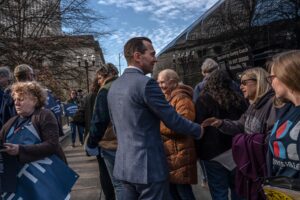 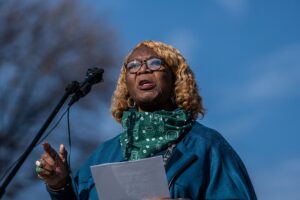 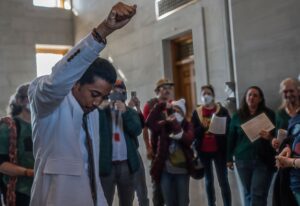 After a Supreme Court decision paved the way for Gov. Lee’s education savings account program, which allows public money to be used for private school tuition, legislation was filed to expand the program to Hamilton County from Metro Nashville and Shelby County school districts.

Tennessee NAACP President Gloria Sweet-Love, representing what she called the “poor and the downtrodden,” called on the governor and Legislature to take swift action on children in the state’s foster care system, including many who have been staying in state offices and sleeping on floors because of a shortage of homes.

“We come because children and babies who are sleeping on cots in offices where there are no showers, no kitchen facilities for preparing meals, we come to speak on their behalf,” Sweet-Love told the crowd.

Lee and the Department of Children Services recently promised to raise the salaries of state social workers, which they consider the root of the problem, and to find places for those children to stay, including using private entities to house children.

Dr. Katrina Green and other speakers pushed for Medicaid expansion, which could help 300,000 uninsured and underinsured people obtain coverage, and the repeal of a new state law outlawing abortions. Healthcare in advance of pregnancies would “help prevent unplanned pregnancies by getting women access to birth control in the first place,” Green said.

A moral agenda protects healthcare by expanding Medicaid and resourcing rural hospitals so they remain open, ensuring emergency healthcare to those in the farthest corners of our state.

One of the most restrictive abortion laws in the nation took effect in Tennessee in August 2022 after the U.S. Supreme Court overturned Roe v. Wade. Some Republican lawmakers, however, are planning to sponsor legislation this session to make exceptions for the victims of rape and incest and to remove the “affirmative defense” for physicians trying to save the life of the mother.

Green said she supports those exceptions, especially a change to the law that requires doctors to defend themselves in court if they perform an abortion to save a woman’s life. But she pointed out nobody is available to provide those abortions as long as the procedure is illegal in the state.

“What I’m pushing for and a lot of my doctor colleagues here today is a complete repeal of the Human Life Protection Act,” Green said.

Green told the crowd lawmakers need to change the law because some of them didn’t understand the bill when they passed the legislation in 2019. State Sen. Richard Briggs is one of those admitting he didn’t know what the “affirmative defense” portion of the legislation meant.

Shortly after the plaza rally, the House and Senate convened for their first day of business and elected leadership as part of their organizational work.

Lt. Gov. Randy McNally was re-elected Speaker of the Senate by a 27-0-6 vote, with Democrats abstaining.

House Speaker Cameron Sexton received 76 votes for the speakership, with Rep. Antonio Parkinson of Memphis the only Democrat to vote for him.

Sexton said afterward he believes the group rallying outside the Capitol is “a vocal minority” because most Tennesseans, including some Democrats, don’t agree with their positions.

“They were just an unhappy group of people,” Sexton said.

Referring to legislation passed last year requiring a review of library books to weed out offensive books, Sexton said many parents want to protect their children from “harmful material” in school. Parents also want to know who’s in restrooms when children are using them, in regard to a new law requiring restrooms to be marked in case people of either sex can use them.

“As far as transgender sex reassignment surgeries, Tennesseans don’t think children should have that even with parental consent,” Sexton said. “I understand it might not be what they want, but I think Tennessee in general doesn’t agree with their stances.”

In response to a right-wing report about Vanderbilt University Medical Center providing transgender therapy and reassignment surgery, lawmakers are likely to consider legislation this session outlawing those procedures for anyone under 18.

House Majority Leader William Lamberth said the advocates who rallied on the plaza and inside the Capitol are always welcome in the Capitol.

“We always want to hear from the people of Tennessee, whether they agree or disagree with us,” said Lamberth, a Portland Republican.

Biden’s State of the Union address by States Newsroom March 1, 2022
'We need to defend this law': Inside an anti-abortion… by Kavitha Surana November 15, 2022
On the record with Metro Nashville Public Schools board… by Dulce Torres Guzman July 28, 2022