President Joe Biden visited Dawson Springs, Kentucky on Wednesday as part of a tour of areas damaged by powerful storms over the weekend. 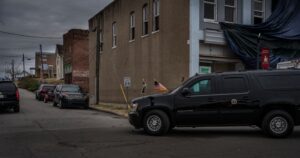 The presidential motorcade heads out of downtown Dawson Springs for a rural neighborhood nearby. (Photo: John Partipilo) 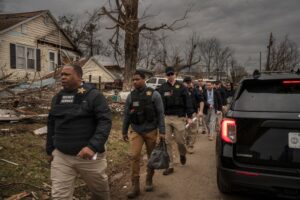 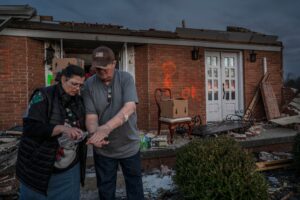 Tim and Julie Creekmur wash their hands with bottled water after spending most of the day salvaging furniture and clothing from their destroyed home. (Photo: John Partipilo) 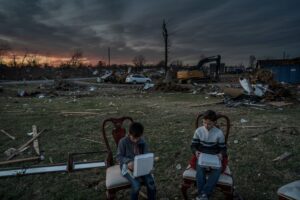 Tim and Julie Creekmur's grandchildren eat a meal brought to them by volunteers. (Photo: John Partipilo) 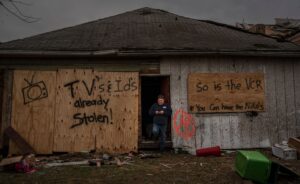 Bill Cobb had his possessions looted at his home and put up signage to let thieves know there was nothing else to loot. (Photo: John Partipilo) 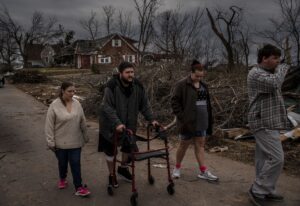 Brandon Clark (with walker) got a huge gash to his leg during the storm. Here, he walks down the street to his house with wife Georgia, left, and friends Laura and Tyler Shephard. (Photo: John Partipilo)

Dawson Springs has a high poverty rate, with median income of for Dawson Springs households is $22,670. The per capita income is $14,650. About a quarter of all families live under the poverty line and with many homes in the area leveled, rebuilding is uncertain.

Partipilo trained his camera on the human elements of the storm, including a resident hurt by flying debris during the Saturday morning storm, two Amish men delivering milk through a wasteland of broken and splintered trees and residents posting signs telling looters to stay away. 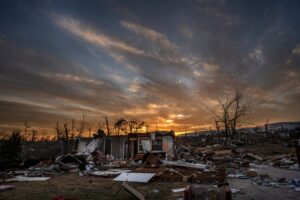 Sunset falls on a Dawson Springs neighborhood. The destruction of homes in the area was massive. (Photo: John Partipilo) 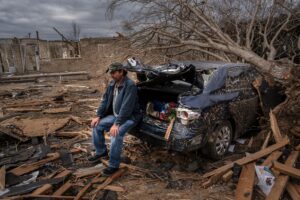 Casey Randolph sits in what left of his car, next to what is left of his house in Dawson Springs, Kentucky. He lived there for 37 years and lost everything. (Photo: John Partipilo) 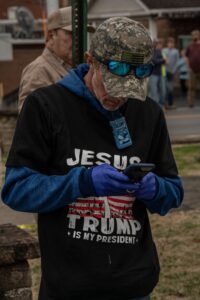 A Trump supporter was on hand to heckle President Joe Biden when the presidential motorcade drove by the square. (Photo: John Partipilo) 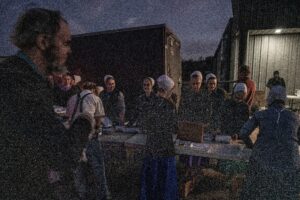 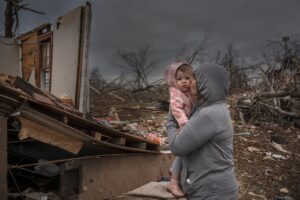 Jennifer Burden holds her granddaughter, Zelphia, next to the family's home, destroyed by the storms. (Photo: John Partipilo) 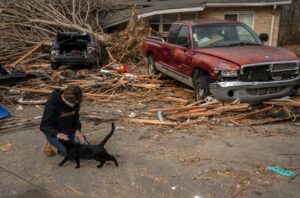 Denisha Randolph, 20, lost her cat Midnight during the storm but he showed at her house on Wednesday. (Photo: John Partipilo)