Phil Valentine, the conservative talk show host who mocked COVID-19, has died of the virus at the age of 61.

His employer, SuperTalk 99.7, announced his death in a brief statement  via Twitter late Saturday afternoon.

“We are saddened to report that our host and friend Phil Valentine has passed away. Please keep the Valentine family in your thoughts and prayers.”

Valentine moved to Nashville in the mid-1980s and found work as a DJ at several local radio stations and portraying state political characters including John Jay Hooker in an annual benefit show for the Society of Professional Journalists, The Gridiron Show. 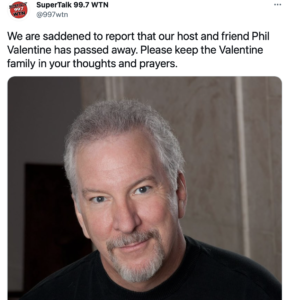 He began pursuing a conservative following when GOP Gov. Don Sundquist was advocating for passage of a state income tax in 2001, using his platform to urge Tennesseans to drive around the Tennessee Capitol while the legislature was meeting to discuss the proposed tax and honk their car horns loudly. In time, he became more outspokenly conservative, writing several books and producing a film called “An Inconsistent Truth” to rebut former Vice President Al Gore’ climate change movie, “An Inconvenient Truth.”

Valentine was skeptical of the seriousness of COVID, writing a parody of the Beatles song “Tax Man,” called “Vax Man,” and even after contracting COVID, told his listeners that “there are alternatives to the vaccine.”

“Got feeling better and better during the course of the show. I think it helps to get back into a routine. Thanks for all the prayers and well-wishes. The good news is there are some very effective alternatives to the vaccine. You need to have a plan in case you get COVID. Make SURE you get your vitamin D3 level checked. My experts tell me your level should be between 50 and 90. And then have a doctor on speed dial who will write you a prescription for ivermectin. Then you’re ready to go. If you’re high risk of dying from COVID I still strongly suggest you consider the vaccine, but this it totally your choice. Just make sure you’re prepared if you decide against the vaccine,” Valentine posted on his Facebook page on July 14.

As his condition worsened, his brother, Mark Valentine, spoke for the family and said Phil would urge his followers to get vaccinated.

Valentine grew up in North Carolina, where his father was a six-term Democratic congressman. He is survived by his wife and a son.

Republican officials across the state paid tribute to Valentine on social media following the announcement of his death.

Phil Valentine was a visionary for the conservative movement, and he made an enormous impact on the lives of many Tennesseans. My deepest condolences and prayers are with Phil’s wife, Susan, and his family. May they be comforted and surrounded by love during this difficult time.

Very sad news for our state! Tennessee has lost a strong conservative voice who will be sorely missed. Chrissy and I extend our condolences and deepest sympathies to the entire Valentine family, Phil’s many friends, and his colleagues and faithful listeners at @997wtn.

Maria and I are deeply saddened by the loss of Phil Valentine and pray for his family as they navigate the difficult days ahead.

I am sorry to hear about my friend Phil Valentine’s death. Phil and I became friends during the fight against the state income tax and he was broadcasting from the steps of the State Capital.

For more than two decades, Phil Valentine was an indomitable voice for our conservative values on air. Every Tennessean owes him a debt of gratitude for helping defeat the state income tax and many other misguided big government proposals. Our prayers are with his family, and he will be missed.

Speaker of the House Cameron Sexton

.@ValentineShow made a difference in life as a strong conservative voice & leading the fight to stop the state income tax two decades ago. He will be greatly missed by all! Our heartfelt prayers & deepest sympathies go out to the Valentine family & Phil’s radio family @997wtn.