The late State Rep. Barbara Cooper during a 2022 event to honor her as the oldest member of the Tennessee General Assembly. (Photo: John Partipilo)

Elected to the state House in 1996, Cooper served the 86th District for 26 years, earning a reputation for strong constituent service and as a champion for education reform in Memphis.

Cooper spent many hours listening to the concerns of her district residents, giving advice and encouraging them to get involved in the community.

“I am deeply saddened by the passing of my longtime colleague and dear friend, Barbara Cooper,” said House Minority Leader Karen Camper of Memphis. “She was a warrior for her community and the city of Memphis, a tireless advocate for education and equality issues and just a delightful person. We will all miss her.”

Rep. John Ray Clemmons, Democrat of Nashville, said he is “devastated,” and that Cooper treated him like a son. Clemmons, who shared an office suite with Cooper and Rep. Johnnie Turner of Memphis, said the group looked like an odd trio.

“My eight years with her produced some memorable moments,” Clemmons said. “In a very challenging environment where it’s easy to get discouraged and cynical. Barbara Cooper was a constant source of support and sage advice for me.

“She acted and behaved with the type of sincere integrity every Tennessean would hope to have in their representative. You didn’t get any run around or bullshit from Mrs. Cooper. She didn’t have time for it. She told you like it was and I absolutely loved her for it.”

A retired Memphis City Schools teacher who also performed several other roles in the district, Cooper believed in the “transformative power” of education and continued studying through her life, according to a statement from the House Democratic Caucus. A graduate of Manassas High School, she earned bachelor’s and master’s degrees from Tennessee State University and a doctorate of religious philosophy and Christian psychology at Jacksonville Theological Seminary. 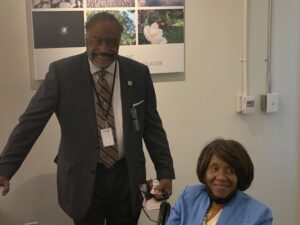 State Rep. Barbara Cooper of Memphis was vaccinated against COVID-19 on February 2nd, 2021. The 91 year-old lawmaker received her second dose of the Moderna vaccine. Cooper said she is excited about the vaccination and added, "I am encouraging everyone, especially those in high-risk categories like myself, to roll up their sleeves and get vaccinated when they are eligible and help fight this virus that has ravaged our community in Memphis and Shelby County." Cooper has served Tennessee House District 86 in the State Legislature since 1996. (Photo: Karen Pulfer Focht) 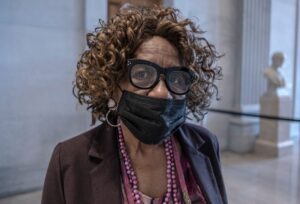 Besides her decades of work in schools, Cooper concentrated on advancing the rights of Black Tennesseans, including pushing what was called the Cooper-Jones initiative, an education collaboration with former Rep. Ulysses Jones Jr. that sought to boost underserved Memphis residents. She formed the Harriet Tubman Legacy Awards to honor Memphians for their efforts to lift up the community.

She was a member of Alpha Kappa Alpha Sorority Inc., the NAACP, Tennessee Black Caucus of State Legislators and the National Council of Negro Women. She attended St. Augustine Catholic Church.

Born Aug. 4, 1929, Cooper is survived by her daughters, the Rev. Joan Cooper Burnett and Tanya Cooper, three grandchildren and great-grandchildren. She was preceded in death by her husband of 55 years, John D. Cooper, and her son Carl Cooper.