Sen. Jeff Yarbro, far right, talks with people from Mosaic after the meeting and said “it was heartbreaking to hear the stories of people are working hard and raising families. We have to make sure that people are treated fairly and treated like people”. Councilmember Russ Bradford is to Yarbro’s right, with hands in pockets.(Photo: John Partipilo)

Negotiations between Mosaic Apartments tenants and management ended abruptly after advocates accused the company of mishandling the tenants’ safety concerns.

On Wednesday, a public meeting was held between the tenants and Village Green Management, a California-based company, in the hopes of coming to an agreement about whether nearly 100 tenants would be evicted from the apartment complex.

Representatives from the company, along with Rep. Mike Stewart, Metro Councilmember Russ Bradford and Sen. Jeff Yarbro attended the meeting to facilitate communication with Workers Dignity, which has been advocating on behalf of the tenants.

Tenants lined up at Glenview Elementary School to testify that on May 21, they received phone calls and messages stating that due to recent storms, the apartments had been deemed unlivable and that they were being evicted from their apartments despite having lease agreements. 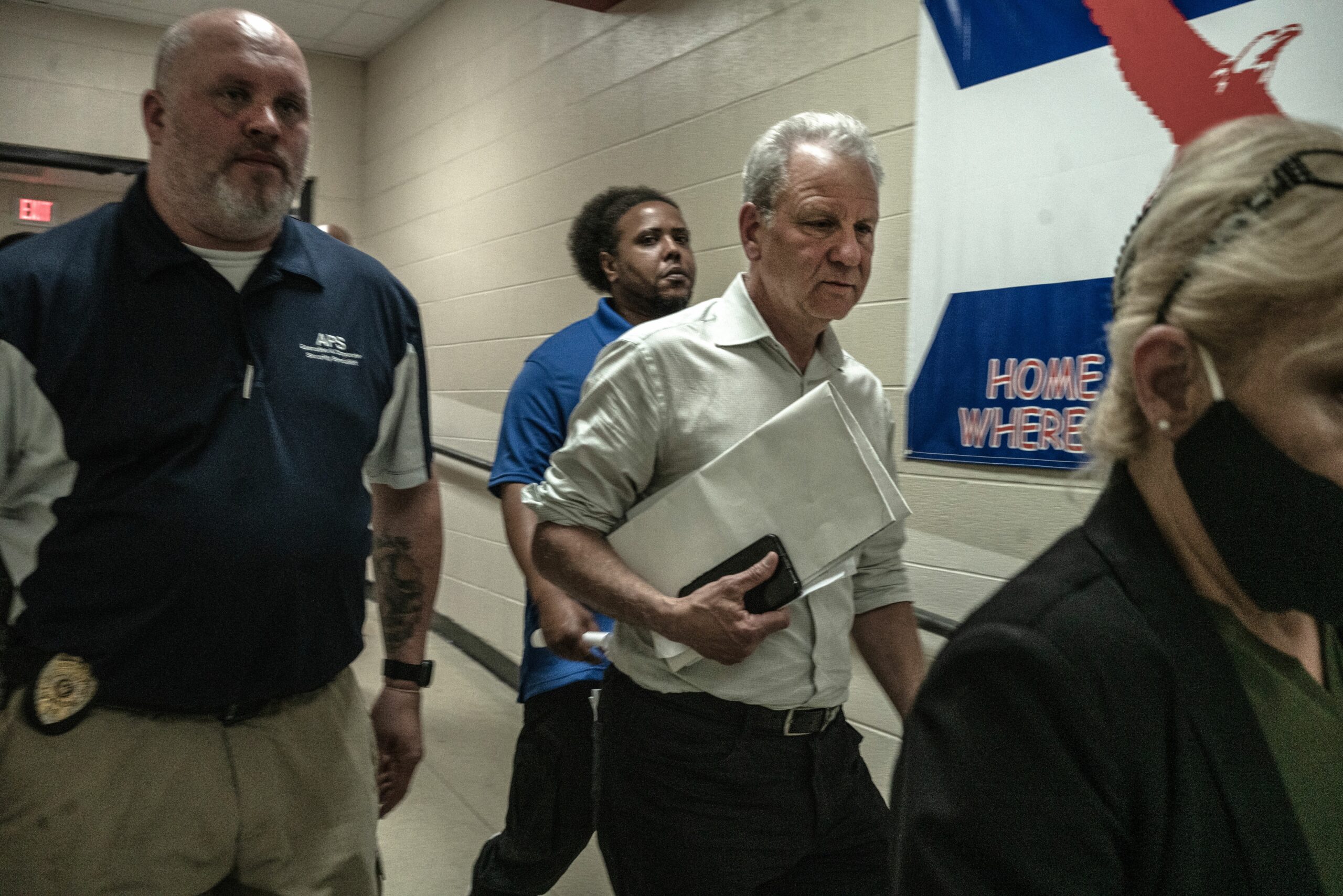 Rob Bond (white shirt), owner of Village Green Managment, leaves the building because he said he had to catch a flight. (Photo: John Partipilo) 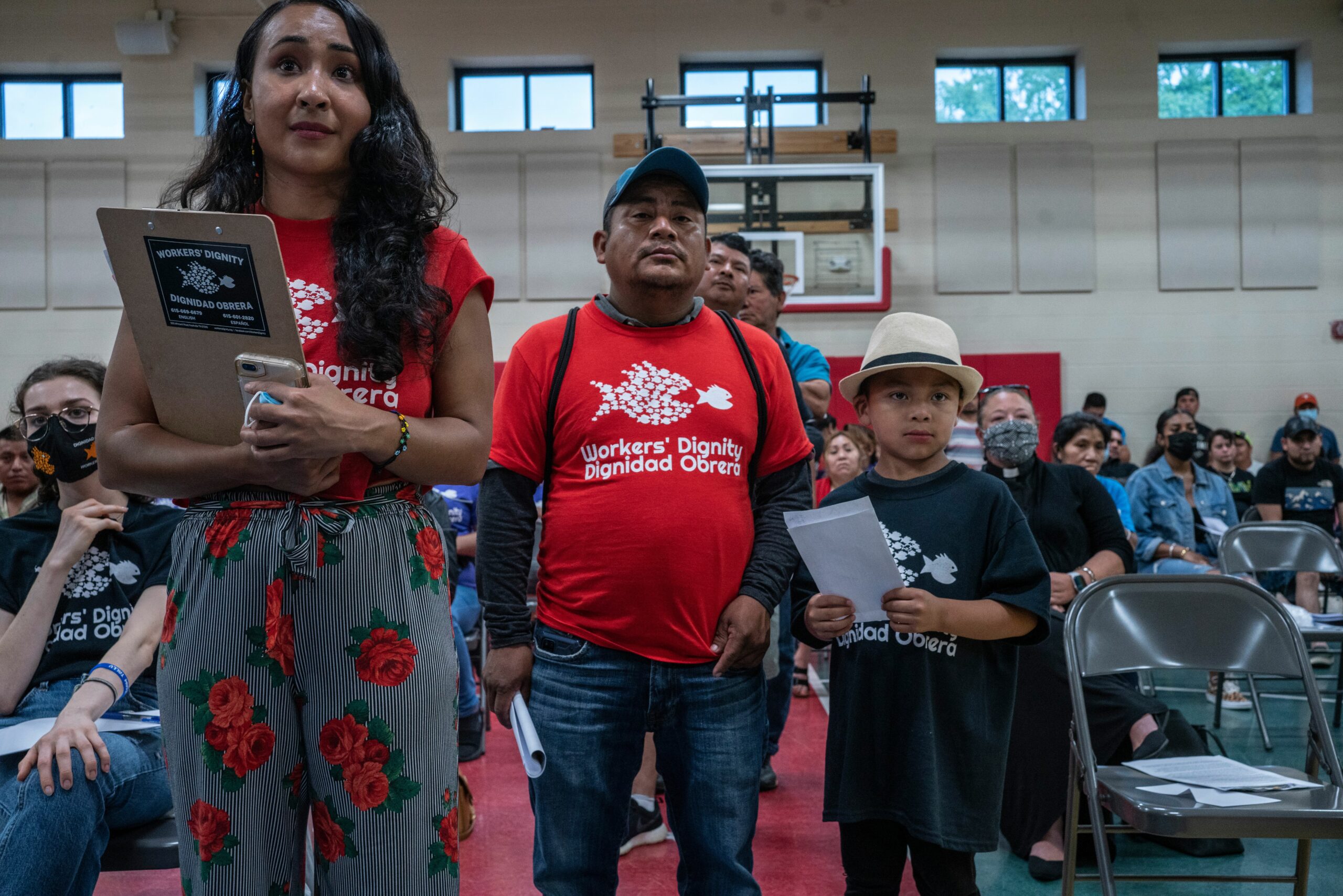 From left, Cecilia Prado with Workers Dignity waits with Mosaic apartment tenant Nicolas Alvarado and son Nery, 7, who wait to speak to management about eviction threats at a June hearing. (Photo: John Partipilo) 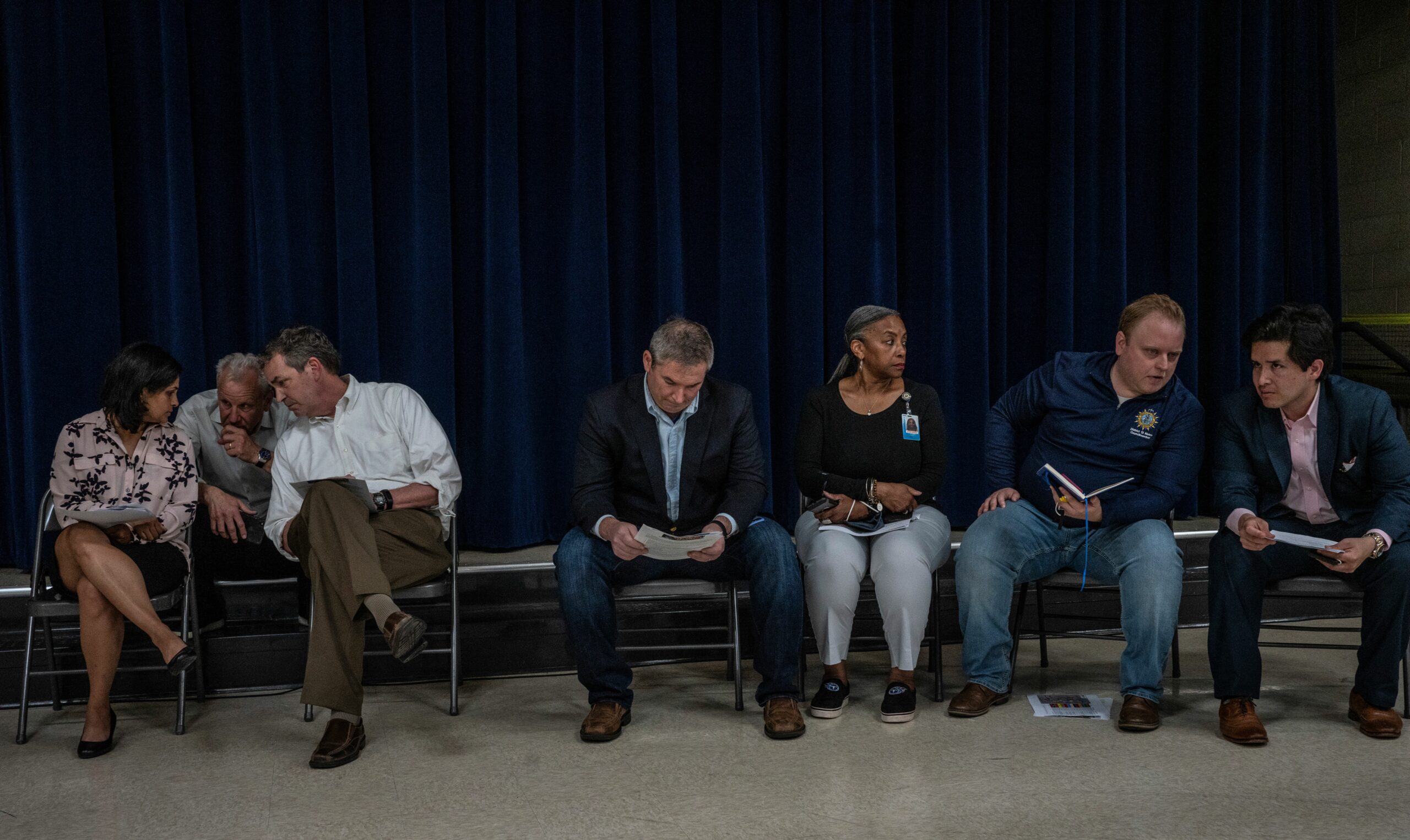 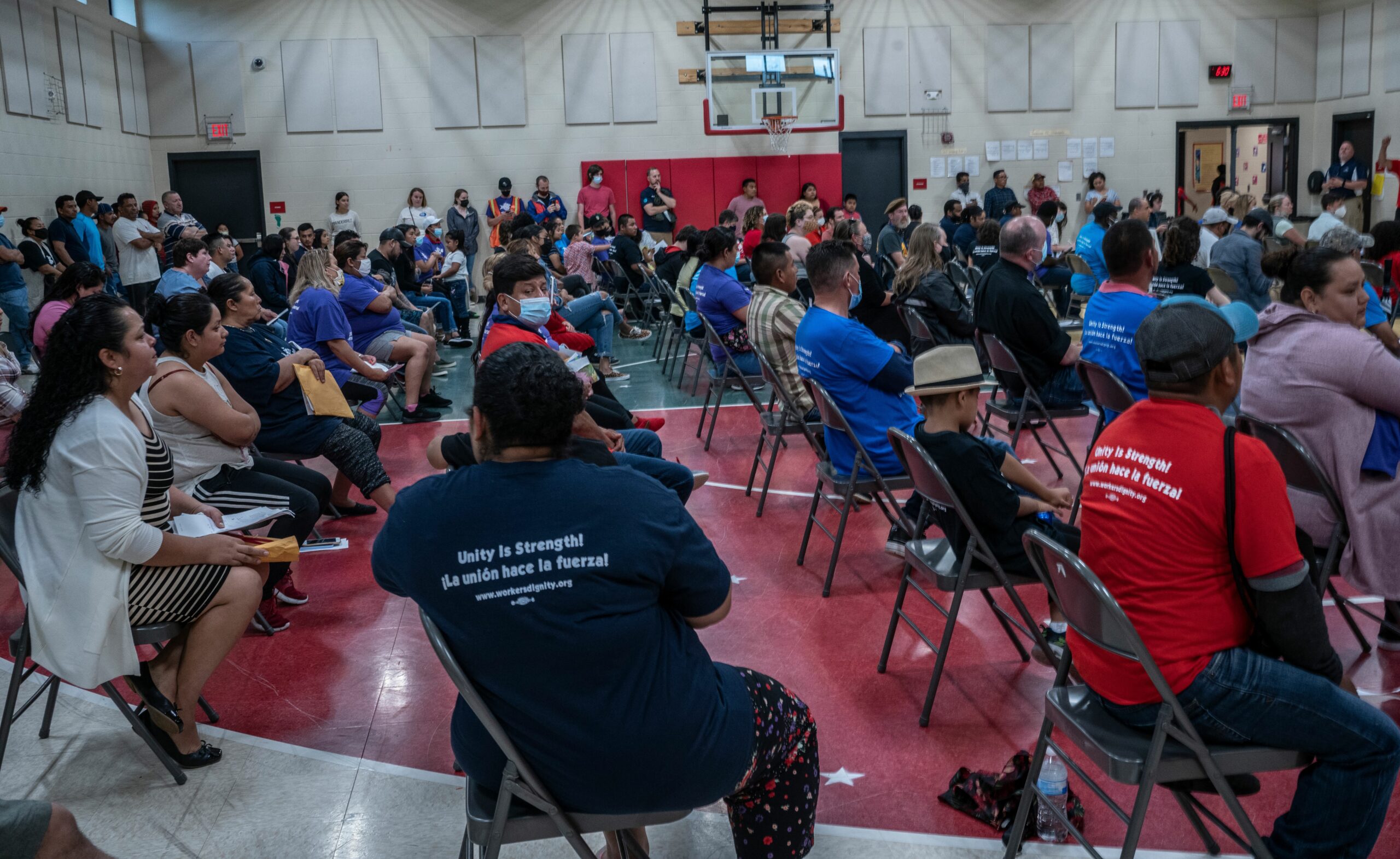 Hundreds of people from the Mosaic Apartments in Nashville at a meeting to question management about evictions notices . (Photo: John Partipilo) 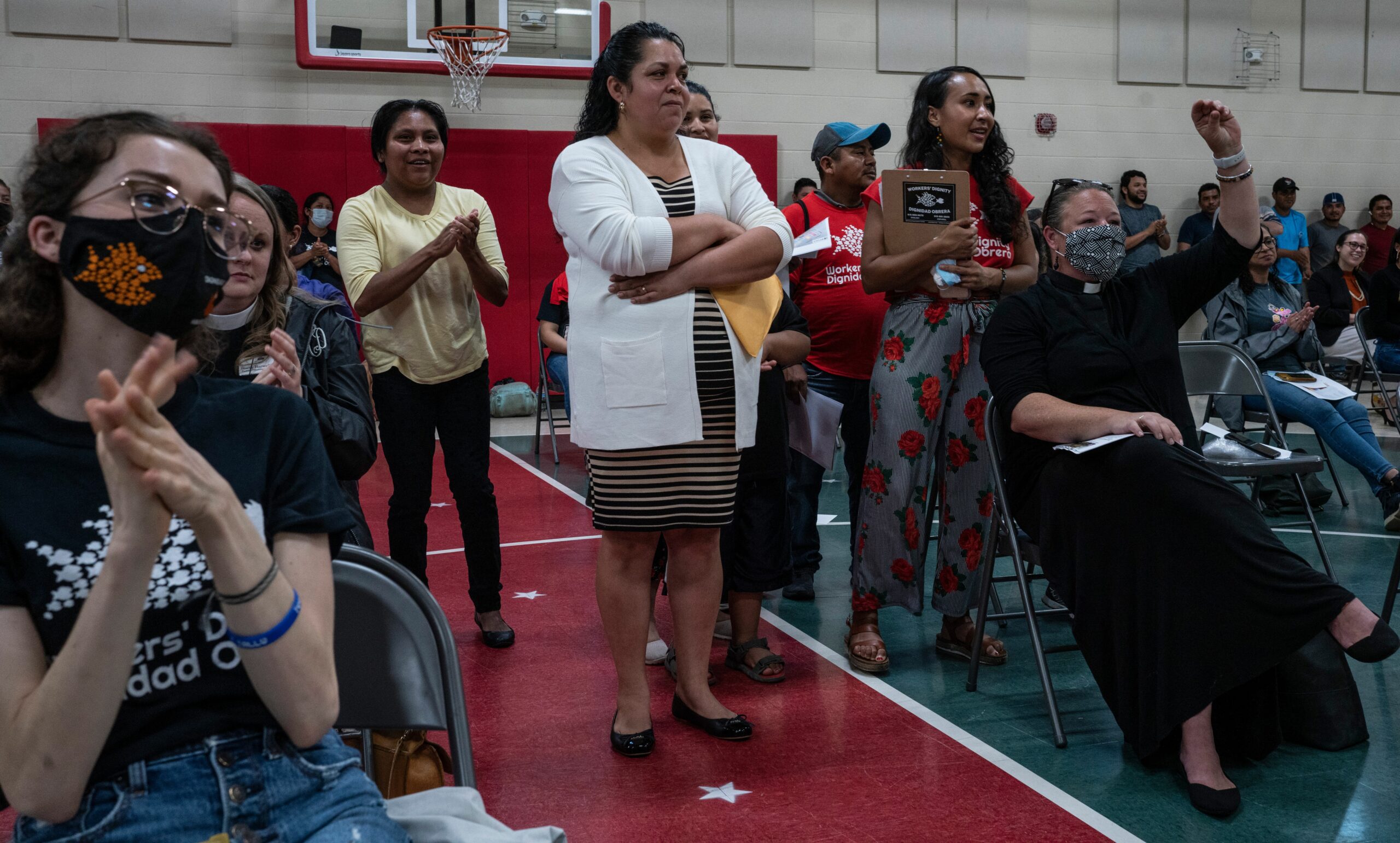 Upon being told they had only three days to leave, tenants organized and said they had each been told conflicting information as to why they were being evicted.

Juana Alamilla, a tenant, recalled being told by the manager that she would be allowed to return after inspections but immigrant tenants from Guatemala would not.

Village Green Management called the eviction notices a miscommunication, adding that they had never intended on evicting tenants.

A separate inspection initiated by Bradford found that the apartments were in livable conditions but also found code violations that need to be corrected.

Village Green Management assured tenants that they would fix the 54 apartments affected by the storm and temporarily relocate tenants, but tenants demanded compensation for their troubles.

Several residents spoke of the financial difficulties they experienced in the weeks following the initial eviction notices. Yolany Aleman recently gave birth and said she was under pressure to hire workers and quickly move into another apartment.

Workers Dignity presented a list of 22 demands on behalf of the tenants. Among those requests were $6,000 in compensation, a children’s playground, firing the current manager and addressing apartment repairs.

Yarbro and Bradford stayed to assure tenants they would not be evicted from the apartment complex and continued negotiations.