Dr. Jason Martin, a pulmonary and critical care physician at Sumner Regional Medical Center, has made official what’s been rumored for months: He’s running for governor.

Martin made the announcement at Meharry Hospital in Nashville Monday morning after launching  an exploratory committee a month ago. He has appointed Keith Maune, founder of a Nashville technology company, as treasurer. State law requires appointment of a treasurer before a candidate can begin raising money.

“We need leaders who will tell the truth,” Martin added, noting the pandemic has exposed inequities in society and in healthcare.

Martin has been outspoken about the handling of the COVID-19 pandemic in Tennessee since the Tennessean first profiled him in April 2020 and in recent months, his criticism of Gov. Bill Lee has become more pointed. In July, Martin led a group of physicians in July calling for a U.S. Department of Justice investigation into Lee following the firing of the state’s chief vaccination official, Dr. Michelle Fiscus. 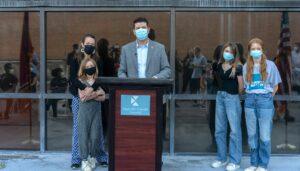 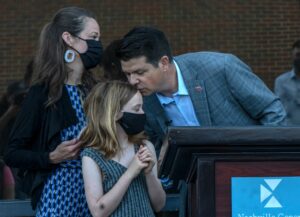 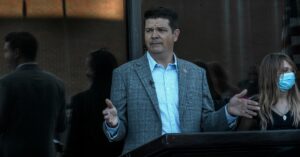 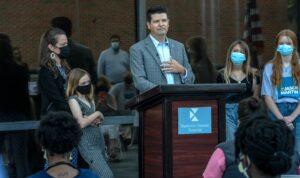 Although Martin has Lee in his sights, a win in the August 2022 Democratic primary isn’t a sure thing. Carnita Atwater of Memphis, who runs a community development corporation in a largely Black community, has already announced her candidacy and on Thursday, Greeneville pastor Casey Nicholson announced his.

In Democratic circles, two other names are mentioned as candidates who could announce in the next few weeks: Shelby County Mayor Lee Harris and Memphis City Councilmember J.B. Smiley.

Harris was a popular state senator prior to being elected to his current role in 2018 and with a Shelby County base, would be a strong primary candidate.

Winning a statewide race remains a longshot for Democrats. In 2018, two-term Nashville Mayor Karl Dean lost to Lee, a first time candidate, by a 20% margin, 59% to 39%. The same year, former two term governor Phil Bredesen, who was expected to run a competitive race, also lost the U.S. Senate race to then-Congresswoman Marsha Blackburn 54.7% to 43.9%.

Martin is married and has three children. He received his medical degree from the University of South Alabama College of Medicine and did his residency in internal medicine at Vanderbilt Medical Center. This is his first run for office.

Analysis: All you need to know about Knox County elections by Lucas Brooks July 22, 2022
Biden’s State of the Union address by States Newsroom March 1, 2022
On the record with Metro Nashville Public Schools board… by Dulce Torres Guzman July 28, 2022