A.J. Starling, secretary/treasurer of the Tennessee AFL/CIO, with a group of union members outside the Nashville offices of U.S. Senators Marsha Blackburn and Bill Hagerty. (Photo: John Partipilo)

Workers and union leaders rallied in front of the offices of Tennessee’s U.S. senators on Tuesday, urging them to support working-class Americans by voting to provide protections for employees seeking to unionize.

With the Senate in session, neither Sen. Marsha Blackburn nor Sen. Bill Hagerty was on site but organizers held signs in front of their Nashville district offices ahead of an upcoming U.S. Senate hearing for the Protecting the Right to Organize Act (PRO), a sweeping labor rights bill.

The PRO Act passed in the U.S. House with a 225-206 vote, gaining some support from Republicans but has received Republican opposition in the Senate. If passed, the bill would allow workers to unionize in the private sector, to collectively bargain for better working conditions and fair wages; to prevent employers from using immigration status against an employee, to establish monetary penalties for companies found in violation of worker’s rights  and to prevent employers from interfering with union organizing drives.

Group leaders spoke to the crowd about how the pandemic changed the way essential workers were viewed. While many labor workers were considered crucial to keep the economy going, workers still faced unlivable wages and had no health insurance despite making up a large percentage of COVID-19 cases. 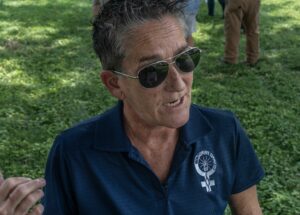 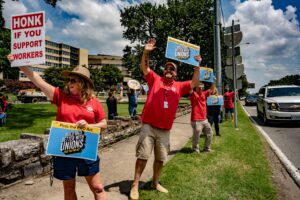 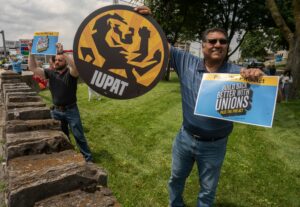 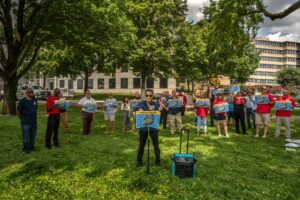 “Healthcare for us in the unions is no burden to the taxpayer,” said Kim Sansom, president of the Tennessee chapter of International Brotherhood of Electrical Workers, an electrical union.

“They’ve always been essential, the country just now realized it,” said A.J. Starling, the secretary/treasurer for the Tennessee AFL-CIO said of workers.

In the aftermath of the pandemic, workers’ wages did not rise alongside the wealth of their employers. From March 2020 to March 2021, the wealth of the world’s billionaires increased from $8.04 trillion to $12.39 trillion, according to IPS’ analysis of data from Forbes, Bloomberg and Wealth-X. Amazon founder Jeff Bezos became the world’s richest person and saw his profits rise by 57%. Despite this,  Amazon officials have fought attempts by workers to unionize nationwide and were accused of pushing aggressive public relations to defeat worker efforts in Alabama to unionize.

Because of this, labor-rights activists are calling the PRO Act as a way to level the playing field for workers. Organizers blamed Tennessee’s right-to-work laws for keeping wages low while the cost of living continues to rise in middle Tennessee.

“The ‘right to work’ is misleading in its statement itself because ‘right to work’ diminishes their ability to join a union. The Pro Act would level that playing field,” said Lendon Grisham, president of the Teamsters Local 480, a union organization.

In what is viewed as another anti-union move, the Republican-led Tennessee legislature voted to place a measure enshrining Tennessee as a right to work state in the state constitution. Voters will get the chance to vote on the effort in Nov. 2022.